Islam, international law and the protection of refugees and IDPs

Over half of the world’s more than 10 million refugees are in Muslim countries while 9 million of the total of over 26[i] million IDPs worldwide are displaced in the Muslim world, including over 800,000 newly displaced as a result of the ‘Arab Spring’ uprisings.[ii]

The protection of refugees and internally displaced people (IDPs) is guaranteed under International Humanitarian Law (IHL) – mainly the Geneva Convention of 1949 and two additional Protocols of 1977, and the Refugee Convention of 1951 and the Protocol of 1967. In addition there is the broader framework of International Human Rights Law (IHRL), the main inspiration for which is the Universal Declaration of Human Rights (UDHR) of 1948.[1] The UDHR paved the way for the later adoption of human rights treaties – such as, in 1966, of the two Covenants on Civil and Political Rights, and Economic, Social and Cultural Rights. There are also subsequent regional and topical instruments and many specific Conventions and international agreements that are relevant to the protection and assistance of displaced people.[2]

Islam requires believers to assist and protect vulnerable people and offers a number of mechanisms for their care and support. However, Islam and Islamic shari’a[3] do not offer a comprehensive legal system for the protection of refugees and IDPs, at least not according to current understanding of protection. For example, while there is a right to seek asylum, exemplified most notably by the Prophet’s migration to Medina to avoid persecution, there is no overtly stated obligation on the part of Islamic states, in shari’a at least, to provide asylum.

There has in recent years been some debate about the UDHR in the Islamic world, mainly on the issue of whether it is compatible with shari’a. Some human rights advocates, both Muslim and non-Muslim, fear that Islam, or at least shari’a as practised, might be incompatible with human rights, or with the UDHR, and therefore with IHRL. Some Muslims, on the other hand, argue that the UDHR is in direct conflict with some principles of shari’a law and thus unsuitable for the Islamic world.

Perhaps the most fundamental difference between an Islamic and an internationalist point of view of human rights lies in the concept of rights itself. While the UDHR stresses the universality of human rights, Islam recognises two types of rights: rights that humans are obliged – by virtue of being the creations of God – to fulfil and obey; and rights that they are entitled to expect from their fellow human beings. It is the latter that correspond to what are elsewhere termed ‘human rights’. The former are rights that stem from, and are obtained through, belief in God and religion.[4] In this concept only God truly has rights and the rights of humans are understood as their obligation to abide by God’s commands. They are, first and foremost, the rights of individuals to abide by and adhere to the laws that God decreed and are only possible through this belief system, thus excluding non-Muslims.

Another potentially difficult point to reconcile is the principle of equality between men and women. The UDHR affirms unconditionally complete equality between the sexes. Under shari’a law a woman can expect to be provided for, while men expect to inherit twice as much as the woman. In the situation of the rights of restitution of property to refugees, for example, this would raise questions, such as what the implications are for the many female-headed households trying to survive or rebuild lives and livelihoods after conflict and displacement.

Islam does offer an array of rights that humans, by virtue of being human, are entitled to and which, from a modern perspective, seem no different from many of the rights listed in the UDHR. For example, the right to life is a fundamental right in Islam for Muslims and non-Muslims alike. Similarly, a person, irrespective of their religion, has the right to be protected from physical harm unless they commit a crime that under shari’a law would demand physical punishment or the death penalty. In modern secular democratic states the state has the ‘monopoly on violence’.[5] In Islam God has this monopoly which is manifested through Islamic law.[6]

Rights to justice, equality, safety, security and human dignity are among those rights deemed indispensible in Islam. These are supplemented by further rights such as social solidarity, the right to education and to own property, and freedom from slavery. It is not difficult to see why some would argue that many of the rights acknowledged and guaranteed in the UDHR are rights that had been granted in Islam some 14 centuries earlier.

The fact remains that there are certain aspects of the UDHR that would make it difficult, if not impossible, for countries wishing to adopt a shari’a legal system to adopt the UDHR. This was acknowledged by the Organisation of Islamic Cooperation (OIC), which includes virtually all Islamic states. The OIC responded by producing its own human rights charter which, while inspired by the UDHR and emphasising “the commitment of its member states to the UN Charter and fundamental Human Rights”, is yet compatible with Islamic principles. The Cairo Declaration[7], as the resulting document is known, unfortunately suffers from a lack of universal appeal. This is perhaps an inevitable consequence of linking what are thought of as universal rights to a specific religion.

Are the UDHR and IHRL then simply incompatible with Islamic law and shari’a? On a very fundamental level, Islam is egalitarian and seven of the eight Islamic countries present at the initial voting in 1948 voted in favour of the UDHR.[8] Iran and Lebanon participated in the drafting while the then Pakistani foreign minister called for its adoption.

The UDHR is not a treaty that countries can sign up to. It is a symbolic document representing a universal approach to the rights of all human beings. The actual commitment of a country to the spirit of the UDHR is through signing up to the individual treaties. The UDHR serves as a source of inspiration for the treaties and not as a legal document. Moreover, most international treaties permit signatory parties to express reservations regarding particular articles or clauses, whether for country-specific or cultural/religious reasons. The majority of Arabic and Islamic countries have signed up to most of these treaties while expressing some reservation on some of the details, whether for political reasons (for example, if an article or clause might involve an implicit recognition of the state of Israel) or for religious reasons (such as granting equal rights to men and women when these rights conflict with Islamic shari’a, as in the case of inheritance).

Adopting the international treaties would help fill the gaps in the Islamic protection regime, particularly in light of increasing calls for the adoption of shari’a as a source of national legislation. Protection of vulnerable groups chimes with the spirit of Islam. Establishing a legal framework for protecting refugees and IDPs that is also recognised internationally would be a welcome step and would complement existing mechanisms.

Musab Hayatli mhayatli@hotmail.com  was the editor of the Arabic edition of Forced Migration Review.

[2] A list of some of these and the countries that have signed up to or ratified them is on page 12.

[3] Sharia (meaning ‘way’) is the legal framework within which the public and private aspects of life are regulated for those living in a legal system based on Islamic principles.

[6] As in secular states, legislation, interpretation and application of these laws will vary from one Islamic state or Islamic authority to another. 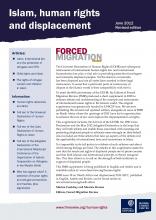