Militia, freedom fighters, rebels, terrorists, paramilitaries, revolutionaries, guerrillas, gangs, quasi-state bodies... and many other labels. In this issue of FMR we look at all of these, at actors defined as being armed and being non-state – that is to say, without the full responsibilities and obligations of the state. Some of these actors have ideological or political aims; some aspire to hold territory and overthrow a government; some could be called organised groups, and for others that would stretch the reality. Their objectives vary but all are in armed conflict with the state and/or with each other. Such actors, deliberately or otherwise, regularly cause the displacement of people.

By the rules of the modern world, states bear the responsibility to treat all in their territory, including displaced people, according to established rights. Even though states often ignore these rights and their own responsibilities under international human rights law, these rights and responsibilities still exist.  It is not so clear, however, whether human rights obligations are binding on non-state actors such as armed groups even in cases where these actors exercise significant control over territory and population. It is clear, however, that Additional Protocol II to the Fourth Geneva Convention forbids the displacement of the civilian population for reasons related to the conflict unless the security of the civilians involved or imperative military reasons demand it.

Some of these armed non-state actors behave responsibly and humanely, at least some of the time. Others seem to have no regard for the damage, distress or deaths that they cause – and may actually use displacement as a deliberate tactic – in pursuit of their goals of power, resources or justice. This issue of FMR looks at a variety of such actors, at their behaviours and at efforts to bring them into frameworks of responsibility and accountability.

Although their voices are heard through a number of the articles, it was not possible to provide a more direct voice for the actors in question. They are by definition outside the law and not easily accessible. This issue of FMR focuses more on the consequences of their violence and its effects on people, and suggests ways in which these might be mitigated.  The articles included here reflect the views of civil society groups and individuals in regular contact with non-state armed groups, of academics and governments, and of organisations that have years of experience in engaging – creatively and productively – with non-state armed groups. We have allowed the authors of the articles in this issue to use the terminology that they feel is most appropriate; some authors refer to non-state armed groups, some to armed non-state actors.

This issue also includes a range of articles discussing subjects as varied as the labelling of migrants, solar energy in camps, gang persecution, and scoring states’ performance in respect of the rights of refugees.

This issue is online at http:// www.fmreview.org/non-state/ and will be available in English, French, Spanish and Arabic.

All issues of FMR are freely available, and searchable, online. We encourage you to post online or reproduce FMR articles but please acknowledge the source (with a link to our website) – and, preferably, let us know. And if your organisation has an online library of resources or listings of thematic links, we would be grateful if you would add links to back issues of FMR.

With our best wishes

We are very grateful to Greta Zeender of the Norwegian Refugee Council’s Internal Displacement Monitoring Centre for her help, advice and support on the feature theme of this issue.

We would like to thank those agencies that have generously provided funding for this particular issue: Internal Displacement Monitoring Centre (IDMC/NRC) and the Swiss government’s Federal Department of Foreign Affairs. We would also like to thank all of our regular donors for their continued and valuable support. Regular funders are listed on our funding page. 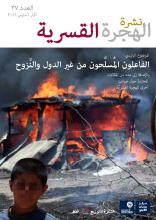