Over the past decade the 47-member Council of Europe[1] has put a considerable amount of effort into promoting the Guiding Principles.

Eleven of the 47 Council of Europe member states have a combined population of approximately 2.5 million IDPs. Alarmingly, only a few hundred thousand have found a durable solution to their displacement over the past ten years and most of these people have rebuilt their lives elsewhere than their areas of origin. Contrary to all expectations, the number of IDPs in Europe has not fallen significantly. So somewhere, somehow, our efforts and policies have failed, despite international human rights and humanitarian norms becoming increasingly more elaborate.

The Council of Europe has long taken an interest in the issue of displaced persons. Its Parliamentary Assembly has adopted various recommendations and resolutions – on issues such as the education of refugees and IDPs in European countries and the humanitarian situation of displaced populations in Turkey, the Russian Federation and CIS countries, south-eastern Europe and the South Caucasus (and, most recently, Georgia). In 2006, at the instigation of the Parliamentary Assembly’s Committee on Migration, Refugees and Population, the Committee of Ministers of the Council of Europe agreed 13 recommendations on IDPs. These Recommendations[2] do more than just re-state the non-binding Guiding Principles. They underline the binding obligations undertaken by Council of Europe member states that go beyond the level of commitments reflected in the Guiding Principles.

Most European states concerned have established domestic normative frameworks for internal displacement since 1998. However, only three countries – Azerbaijan, Georgia and Turkey – have made significant progress in bringing their IDP legislation into line with the provisions of the Guiding Principles. Paradoxically, these are the countries with the least prospect of return of their IDP populations in the near future because of the lack of political solutions. At the same time, the IDP situation has improved best in the Balkans, where there have been internationally negotiated and monitored agreements and where there have been advances in EU integration.

Furthermore, as IDPs remain under the protection of their own country, they are usually entitled to the same rights as any other person. Besides the Convention, there are other Council of Europe instruments that are binding on member states,[4] and both the Council of Europe and its Parliamentary Assembly have mechanisms to monitor countries’ obligations under these instruments. Of particular importance is the little known and much under-used protection mechanism provided by the European Social Charter and the revised Social Charter, whereby international NGOs which have participatory status with the Council of Europe and are listed as having standing with the European Committee of Social Rights can submit collective complaints irrespective of whether the organisations concerned come under the jurisdiction of any of the State Parties to the Social Charter.

However, there still persists a wide gap between legislation and practice, especially at local level. There is no question that the primary responsibility for protecting displaced persons lies with governments and local authorities. It is at this level that the difference will finally need to be made. National authorities need to be urged to devote resources, expertise and political will to address the specific vulnerability of IDPs. In some cases, the authorities face severe economic constraints and are unable to meet IDPs’ need for protection and assistance, even if the will is there. In other cases, governments clearly lack the necessary political will to protect and help displaced persons.

We need to encourage states to step up implementation of existing legislation and to observe human rights to the letter. We need to enhance the impact of the Guiding Principles by ensuring that they are enshrined in the relevant legislation of all countries. We need binding instruments to hold states and their governments accountable for their breaches of human rights. And above all we need to end ostrich-style politics and instead work towards peaceful, diplomatic, win-win solutions that will help displaced people return to their homes.

Corien W A Jonker (c.jonker@tweedekamer.nl) is the Chair of the Parliamentary Assembly of the Council of Europe’s Committee on Migration, Refugees and Population (see http://assembly.coe.int/Main.asp?link=/committee/MIG/Role_E.htm). 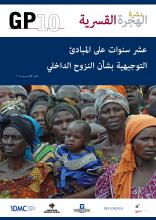