"I came here from a war, and we had to leave or we would have been killed. We came here and school helped me feel confident..."

Previous research has suggested that refugee children's experience in schools can make a real difference to their ability to settle and regain a sense of belonging. As the UK government proposes measures which would take asylum seekers out of mainstream education to be educated separately , now is a particularly opportune moment to reflect on the role of schools in the lives of young refugees.

This article is based on a research project focusing on the experience of young refugees in two secondary schools in London and their perspectives on the factors that have helped them settle and do well in school. Fifteen students (from Somalia, Kosovo, Ethiopia, Colombia, Turkish Cyprus, Eritrea, Turkey and Iraq) and key staff in the two schools were interviewed over a period of six months.

Students talked about multiple losses of people, places and possessions. One student had been parted from his mother at eight and not reunited with her for five years. Those living with both parents appeared to be the most settled. Others were living with one parent or other relatives or were being looked after by social services. A third of those interviewed either knew for certain, or suspected, that one of their parents was dead. Many students talked of this continuing uncertainty.

One young man linked his experience of losing his family to his hope of doing well and achieving his ambitions. For him, school had provided a focus and the teachers a source of emotional support. All the students had high aspirations and hoped to go on to college and university when they left school.

Students pointed to a number of factors which helped them to settle in and begin to achieve in what was often a very different system. Three important themes emerged.

All students mentioned the importance of having dedicated language support teachers who were able to speak to them in their own language and of teachers with understanding of addressing specific learning needs in helping them to settle.

"They [the teachers] worked with you and showed you around and helped me, and there was a teacher from Somalia who translates the lesson which does help a lot."

Students who had difficulties said that more one to one input from specialist teachers would have helped them. They identified the importance of better support in English language skills.

Most students said that having schoolmates from their home country immediately made them feel more comfortable. Many additionally mentioned the benefit of mixing with students from a variety of backgrounds. All said they now have friends at school.

"First it was the teachers that helped me learn, and then it was one of my English friends; well, it was my best friend who was helping me with English and giving me help so that I'm going to do my best."

"If you want to talk about how you settle in school, well if you've got friends from your own culture then it's hard for you to settle down and understand English stuff because it's different. With people from different cultures you learn more things and you settle down."

The 'whole school' attitude towards refugees

The students all identified the positive impact of a whole school approach to issues affecting refugees. Those who were able to identify as refugees and feel that their experiences and contributions were being valued were able to gain a sense of belonging more quickly. In one of the schools, issues affecting refugees were integrated into the curriculum. Regular discussions of refugee issues allowed students to develop a clear understanding of the positive contributions to school life made by young refugees. In the school that had no such policies, the young people did not have a sense of their experience being celebrated in the same way and as a result felt marginalised.

Students identified a number of issues which, if seriously addressed by the school community, made them able to feel settled and to do well.

At one school students felt free to discuss their experiences and believed that pupils and teachers valued this. They thus felt positive about being refugees and able to contribute their particular skills and experience to the school. They reported that in general bullying was not tolerated and that if it did occur they felt confident to discuss it with teachers.

In the other school, however, the majority said that they did not feel comfortable being identified as refugees nor were able to readily discuss their flight and backgrounds in school. These students felt vulnerable to bullying because of their accents and ethnicity. This was made more difficult by their perception that their school was not taking bullying seriously.

"When I first came it was difficult for me. Other boys said I sounded stupid and did my accent. It was all around my accent. I think they were trying to put me down because I am from a different place."

Students from both schools talked of difficulties with specific teachers whom they perceived as unhelpful and/or unfair. Students felt particularly upset when teachers failed to listen and treated them unjustly. They valued teachers who recognised the difficulty of adjusting to the range of subjects and felt out of their depth and humiliated when they could not understand what was happening in class and had to ask teachers to help them out. All the students said that it is vital that individual teachers and the school community should listen to refugee children and take their concerns seriously. Some specifically spoke about teachers they felt were racist and urged the school to take their concerns seriously.

"The teachers are nice and friendly to my mum and every term at parents' evening they provide an interpreter."

It was clear from speaking to the students that where the school had policies on promoting contact with parents the students felt more positive and able to consider themselves part of their school. They also clearly felt that school gave them and their families the chance to be part of the wider community in a new place. Some of the statements made by the young people suggest that their families are also benefiting from their relationship with the schools.

The proposed UK legislation to educate refugee children separately undermines the gains being made by young refugees in mainstream schools which support them appropriately. It is surely in the interests both of individual young refugees and British society as a whole that the regular school system should develop the capacity and understanding to educate all of our children.

Legal challenges to segregation are currently being mounted and opposition is being voiced by many in education, trade unions and refugee support organisations. If legislation to create exclusionary education is passed, young people and their families will effectively be cut off from communities and lose informal opportunities to learn English and better understand British society. The young people interviewed said that this would hold them back and hinder their integration. The experiences of the students in these two schools show that it is realistic to provide appropriate educational and emotional support within a mainstream school setting. 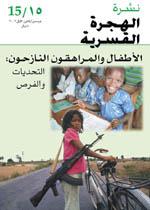