Iraq: towards a field-focused humanitarian reform

Neutrality, impartiality and independence of humanitarian action are threatened in Iraq by blurred distinctions between military, political, commercial and humanitarian roles.

Today Iraq is seemingly lifeless. There is a lack of adequate food, water and electricity, a third of the population is in urgent need of humanitarian aid[1], over four million people are displaced and up to a million civilians may have died since 2003.[2]

International efforts towards reconstruction and security have obviously failed over the last four years. Successive UN Security Council Resolutions have mandated the UN with a political role to support the Iraqi government, which many consider to be a belligerent in some sub-conflicts in the country. The UN’s security, transport and logistics are handled by the Multi-National Force in Iraq (MNF-I), also widely considered a belligerent. Many thus question the impartiality and independence of the UN Country Team.

Humanitarian reform measures have taken a back seat in Iraq. OCHA set up an office for Iraq in Jordan six months ago but no office in Iraq itself, there are no inclusive IASC meetings and the clusters in place are internal to the UN, have no NGO representation and are reconstruction-oriented. Humanitarian action in Iraq remains constrained by insecurity, lack of funds, shortages of staff and capacity, and difficulties in accessing affected populations. It does exist however. NGOs are, with the Red Cross/Red Crescent Movement, amongst the only genuine humanitarian actors with a physical presence among vulnerable populations across Iraq. It is high time to focus on improving concrete responses to the needs of Iraqis through coordinated structures and synergy between sectors.

Let us move forward and build on what already exists. Only physical presence and direct involvement in humanitarian action on the ground will demonstrate that a real and inclusive humanitarian response is still possible. In parallel, setting up the humanitarian reform agenda is of course possible. It can even be done relatively quickly, starting by convening IASC meetings, building better and more inclusive partnerships, and replacing agencies or organisations in coordination structures that are absent in the field with agencies and organisation that have a field presence.

The most urgent action needed is to reaffirm the impartiality and independence of humanitarian action in Iraq. This is important in order to regain the respect of the Iraqi people for humanitarian actors and, therefore, improve relief delivery. Impartiality has to be shown and proved through direct action. But this can only happen by creating a genuine humanitarian space within the UN Country Team, by ensuring that the Humanitarian Coordinator becomes a full-time position (without a political role), and progressively ending support services from the MNF-I.

It is essential to adapt the humanitarian reform agenda to the very specific context of Iraq. It demands inclusiveness with all authentic humanitarian actors and, therefore, avoidance of any UN centrism. But, above all, it requires the absolute understanding of and adaptation to how humanitarian action occurs in Iraq – taking a low profile, out of concern for the security of staff and communities.

This approach also requires avoiding western-centric responses. An approach complementing traditional aid and community support systems in Iraq would concretely demonstrate willingness to create an independent and impartial humanitarian working space. Such a process can only be accomplished through the acknowledgment of the NGOs’ competencies, presence and expertise in the realities of working in Iraq. This calls for respect for the need for safety of their staff, constant access to affected populations and the independence of NGOs and other actors in the field from the UN system.

Direct field action is the only way to continue to deliver vital humanitarian relief, attract necessary donor support and make a reality of the humanitarian reform agenda in Iraq.

Cedric Turlan (communication@ncciraq.org) is the Information Officer for the NGO Coordination Committee in Iraq (www.ncciraq.org). For more information about the work of NCCI and Iraqi civil society see FMR Special Issue, Iraq's displacement crisis: the search for solutions.[4]

[3] “Taking Sides or Saving Lives: Existential Choices for the Humanitarian Enterprise in Iraq”, available at: http://fic.tufts.edu/downloads/HA2015IraqCountryStudy.pdf 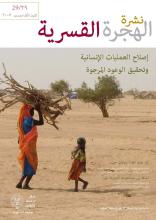