Ground-breaking decisions in two cases brought against the state of Colombia have demonstrated the potential of human rights jurisprudence in clarifying IDP rights and establishing new mechanisms and standards in domestic and international protection.

Regional human rights systems have always played a significant role in emphasising the rights-based nature of international IDP protection. This has been done through reporting activities, fact-finding missions and monitoring of specific internal displacement crises. The volume of actual jurisprudence produced by regional human rights courts on the issue of IDP rights has been modest. There has been a significant development, however, as a result of the two cases brought to the Inter-American Court of Human Rights[1] against the Colombian state: the Mapiripan Massacre v. Colombia Judgement, September 2005, and the Ituango Massacre v. Colombia Judgement, July 2006.

Both cases deal primarily with the deprivation of liberty, torture and massacre of several civilians perpetrated by the paramilitary group Autodefensas Unidas de Colombia in the Colombian municipalities of Ituango in 1996 and Mapiripan in 1997. The acknowledgement of the collaboration – by deed or omission – of members of the Colombian National Army in these armed incursions underlines the state’s responsibility for human rights violations committed in both situations.

Due to threats by the paramilitaries, physical and psychological damage and the destruction of properties and means of livelihood, several families were forced to flee their homes. The multiple human rights violations and forms of deprivation they faced made internal displacement an important subject of deliberation in both cases. Violations of the rights to life, personal integrity, fair trial, freedom of movement and residence, judicial guarantees, private property and child rights were considered by the Court in the context of the provisions enshrined in the American Convention on Human Rights.[2] The Court ultimately found the Colombian state responsible for these human rights violations. Various forms of monetary and non-monetary reparations were demanded of the Colombian government, including the need to enable safe and dignified return to all displaced persons who want it.

These were the first cases in which the Inter-American Court systematically considered the human rights implications of internal displacement. This firmly establishes the competence of the Court in developing and clarifying legal standards for the protection of IDPs and reinforces the international human rights monitoring of IDP situations in the region. The Court not only expanded interpretations of IDP rights but also put forward specific policy recommendations for immediate protection in Colombia. The judgements thus strengthen both the overall international protection of IDPs and the domestic protection responsibilities of the Colombian state.

International protection is strengthened by the acknowledgement that IDPs constitute a special category of concern. The increased vulnerability of IDPs, according to the Court, arises from their greater exposure to violence, abuse and forced recruitment, as well as from the marginalisation, impoverishment and social disarticulation caused by their loss of residence, property and livelihood. The ‘crisis of security’ created by forced internal displacement leaves IDPs unprotected, with women and children disproportionately affected.

This condition of special vulnerability, according to the judgements, creates an obligation for states to adopt positive measures to ensure security for IDPs, even when the displacement is caused by the actions of third parties. In stating this obligation, the Court promotes an understanding of IDP protection that is not limited to accepting humanitarian assistance from the international community. States are bound to take administrative, legislative and/or judicial steps to protect, assist and empower IDPs. The observation of such obligations will be demanded by the Court in all future cases involving IDPs.

The Court’s interpretation of the rights-based nature of IDP protection significantly contributes to protection efforts at the international level. The Guiding Principles on Internal Displacement[3] were both endorsed by the Court and applied in order to clarify the content and reach of certain human rights enshrined in the American Convention. The right not to be forcibly displaced was officially acknowledged as a component of the right to freedom of movement and residence. The vulnerable condition of IDPs was recognised as being a violation of the right to personal integrity. The judgements stress that internal displacement entails massive, systematic and prolonged violations of several human rights, thus preventing IDPs from leading a ‘dignified life’. This entails an expanded interpretation of the ‘right to life’, thereby broadening the nature of protection from mere assistance to the promotion and fulfilment of human rights.

In relation to domestic protection, the Court did not limit its analysis of Colombian internal displacement to the specific circumstances of the two cases. The Court reviewed the origins, complexity and manifestations of the IDP crisis in Colombia in an attempt to place both cases within the context of a larger human rights problem. Great awareness was raised regarding the human rights challenges posed by internal displacement in Colombia and the specific obligations required by the state. Reviewing and evaluating Colombian government IDP policies the Court found that resources assigned to IDP protection fail to address the magnitude of the problem. The Court agreed with previous decisions of the Colombian Constitution Court in considering the inhumane conditions faced by IDPs to be “unconstitutional”.

These decisions have not only benefited hundreds of IDPs directly but have also helped to shape government policy on the issue.[4] By endorsing and elevating these decisions to the regional realm, the Inter-American Court encourages individuals and civil society organisations, in Colombia and elsewhere in Latin America, to promote accountability and demand respect for, and realisation, of IDP rights.

The Court requires – as a form of reparation to the displaced family members and former residents of Mapiripan and Ituango – that the state guarantee their safe and voluntary return within a period of six months. The Colombian state is thus responsible for ensuring safe conditions for voluntary return in both municipalities. If those conditions cannot be guaranteed within the period stipulated, then “the State has to provide necessary and sufficient resources for the victims of displacement to resettle in similar conditions found before the facts of the case and in a place that they freely and voluntarily choose.” This is not a mere policy recommendation but a demand to which the Colombian state is obliged to comply.

The Inter-American Court is well-known for ordering non-pecuniary forms of reparation and for paying due attention to the rehabilitation of surviving victims and their relatives. However, never before have durable solutions for forced migration crises been judicially recognised as a remedy or form of reparation by a human rights court. The Court has taken pioneering steps towards consolidating human rights monitoring of IDP situations, allowing other IDP-related cases to be brought before human rights courts and developing and clarifying new legal standards. 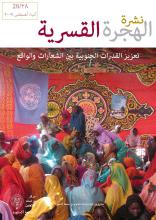