Until recently I have thought of security in terms of guards, radios, grilled windows and doors, close coordination with other international NGOs and a strong organisational security policy. This was until I attended the InterAction/OFDA security training course in London in September of 1998.

I have lived overseas for six years now, including stints in Uganda, Serbia, Bosnia and now Liberia. I have thought of security in different terms in each of these countries. In Uganda when there was a barrage of home robberies in our neighbourhood, our response was to reinforce the grilling on our doors and windows. In Serbia we lowered our presence during the NATO bombings. In Bosnia we would park our land cruisers at night in a guarded area. In Liberia we have fenced our offices and homes and hired 24- hour guards. As Country Director for the International Rescue Committee (IRC) in Liberia I am responsible for developing and implementing the organisation’s security strategy. After attending the InterAction/OFDA security training course in London I began to look at security in a much broader context and at IRC’s security strategy in a different context. I would not previously have thought of an afternoon of colouring with local children as a security activity.

On the Interaction/OFDA security course, a Framework of Security Strategies was presented to assist systematic thinking of combinations of security approaches to use for different types of security threat:

“Basically there are three major ways to reduce risks:

1) Acceptance: one can reduce or remove threat by gaining widespread acceptance for one’s presence and work;

2) Protection: one can reduce risk by making oneself less vulnerable with protective procedures and protective devices, ie radios, guards, grills;

3) Deterrence: one can reduce risk by containing and deterring the threat with a counterthreat, ie legal, economic, or political sanctions and/or armed action.” (1)

This framework was very helpful to me in developing the IRC security strategy in Liberia.

Upon returning to Liberia I presented a three-hour security training session to the staff in Ganta, one of our field offices, to incorporate some of what I had learned in London into our work. It proved to be very enlightening for me and the 30 participants. The first thing we did was talk about the concept of security and what words come to mind. Guards, radios, arms, etc came out. We then discussed security in a broader context and adapted the definition 'freedom from danger and risk’ to our own working concept 'freedom for all IRC staff to work and live without harm in Liberia’.

We then conducted a threat assessment. The group identified the greatest threat to IRC security in Ganta as office and home burglary. We went on to conduct a vulnerability assessment as presented in the Interaction/OFDA course:

In this equation we can only lessen our risk by reducing our vulnerability since we have no control over the threat itself.

After going through this exercise I presented the Framework of Security Strategies from the InterAction/OFDA security course to the group and we discussed how much of our efforts should be directed towards each element (acceptance, protection and deterrence) of the framework, in relation to our risk. The group decided IRC should invest 65 per cent of its efforts towards acceptance and 35 per cent towards protection. This is not to say deterrence should not play a factor in our efforts: certainly IRC should advocate for continued ECOMOG presence (West African Peace Keeping Force, an effective policy force) but within the small community of Ganta, the IRC staff decided to put all their efforts into acceptance and protection and leave it to the head office in Monrovia to advocate for the deterrence factors.

“We have a lot of vehicles, many staff, four or five houses and offices in town, we run around town a lot in our vehicles and we donated trash cans to the city of Ganta.”

Though IRC supports 15 Ministry of Health clinics in rural areas outside Ganta (the closest clinic is two hours drive away), the staff said the local community does not know this. My response was:

“So the people of Ganta see that IRC has four 4WD trucks, 30 staff members, four offices and houses and the support we provide with all these resources over the last year is eight trash cans?”

The group giggled nervously and nodded their heads. They also stated that the local community really saw no benefit in IRC’s presence in the community since, besides the donated eight trash cans and some vague talk about a health programme, they really did not know what IRC was doing there.

The participants felt that IRC’s protection elements were strong, ie good radio systems, 24-hour guards, fences around all compounds, grilled windows and doors, so our discussions continued regarding IRC’s image and the level of acceptance to our work and presence. One staff member stated that one local neighbour was upset because when the fence was put up around an IRC house there was no discussion with the neighbours and it cut off a neighbourhood path. Another stated that IRC had hired 'others’ to bring the reeds for the fence when the neighbourhood could have done it and made a little money and benefited. Slowly we all began to realise what an image and acceptance problem we had.

This was a very serious realisation since the group stated that it would be our neighbours and the local community who could help deter our greatest threat, office and home burglary, by alerting us to strangers in the area, helping to watch our compound and identifying local threats.

I then put it to the group to identify strategies to improve our level of acceptance and our image in Ganta. They came up with plans for providing IRC orientation seminars in the schools and the community, hosting a programme for World Aids Day in the schools, interaction with the community through sports, promotion of IRC’s work at every opportunity - church, markets, bars - and lastly the expatriate programme manager, Tatiana Garakani, decided to host an afternoon of colouring in her yard for local children once every two weeks. The first day over 100 children arrived. Ms Garakani also noticed that when her security lights were on in her compound at night, neighbours would pull their cooking pots and stools closer to the fence to catch the light. She met with the neighbours and told them she could add an extra light that could face their compound if they liked. Since there is no electricity in Ganta (IRC uses generators), and light at night is both a necessity and luxury, the neighbours were very appreciative of this gesture. It is important to note that these new community-based activities were in addition to regular formal and informal meetings with local government officials.

Of course, security is not the only reason to have acceptance and a positive image in a community. It is part of the working standards of most NGOs and, in the case of IRC, our work methodology revolves around community-based programming. In a community such as Ganta, though, where IRC has an office but no programme, acceptance and a positive image can be quite difficult and special effort is needed.

IRC Liberia now looks at security in different terms. The hard elements of protection are still respected, but the softer elements of community support and acceptance are being reinforced. These new softer, acceptance-oriented elements are changing IRC’s image in the community. And with these changes comes decreased vulnerability to the threat of burglary of the office and houses and a more effective security strategy. 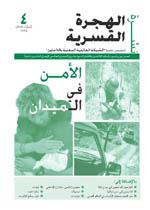