Media coverage of the Kosovo crisis has given the impression that UNHCR and the relief agencies were overwhelmed by the influx of refugees into Macedonia and that it was highly fortunate that NATO was on hand to save the day. Such is the aftermath of NATO’s large and slickly publicised humanitarian operation. This impression is questionable.

UNHCR has been widely criticised for its coordination of relief in Macedonia, and no doubt it could have performed better. But it faced a number of unusual problems in this crisis. First and most importantly, UNHCR had severely limited funds of its own while other players brought unprecedented resources to bear. Macedonian government foot-dragging held up customs clearance of supplies and selection and establishment of appropriate sites for refugee camps. UNHCR’s authority to coordinate was severely undermined by NATO’s operational presence and wealth of logistical resources as well as by NATO’s burning political desire both to give humanitarian aid and to be seen doing it. Finally, many governments made bilateral funding agreements with NGOs, greatly undermining UNHCR’s ability to prioritize programmes or monitor efficiency.

The humanitarian response was hampered from the outset. Several days of negotiation were required before refugees could be transferred from the Blace border. In the meantime they stood in the rain, within sniper and artillery range of Serbian forces, while NGOs, with staff on the ground and materials held up at Skopje airport, were forced to stand idly by, denied access to refugees by Macedonian authorities. The continued reluctance of the Macedonian government to authorize extra sites left UNHCR with no choice but to agree reluctantly to facilitate direct transport of refugees through Macedonia to Albania and other third countries (sometimes, apparently, without their consent).

Coordination between agencies was unlike that in other refugee emergencies. Initially, NGOs often arranged coordination meetings themselves and afterwards informed UNHCR of the decisions. Lacking funds, forced to keep a low profile in a hostile political environment, under pressure to rely on NATO and with insufficient experienced staff, UNHCR handed over management in each camp to specified ‘lead agencies’ but was in no position to control performance adequately. Experienced UNHCR field officers (working incredibly long hours) repeatedly expressed frustration at the lack of human and financial resources. While some lead agencies performed creditably, others were unprofessional and inefficient.

At the practical level also, there were also many unusual features to this crisis. Firstly, the vast majority of refugees settled with host families, and not in camps, making accurate distribution of aid a nightmare. Unlike in African camps, nappies, sanitary towels and mattresses were distributed. Bottled water (sometimes imported from France) was given out to new arrivals, even weeks into the crisis. Cooking facilities were extremely limited, so expensive packaged ready-to-eat meals were the norm.

As in many other crises, sanitation was clearly substandard in many camps. The Macedonian government, against UNHCR advice, insisted that Cegrane camp was located where it was impossible to establish soakaway latrines without contaminating ground-water wells. As an interim solution, latrines were built on top of expensive sealed containers which needed to be pumped out by imported sewage trucks rather than being filled in when full. In all camps, latrines filled very quickly as refugees used their plastic bottles to wash themselves and then dropped the bottles into the pits. Latrine design was haphazard in many places, and easily-cleaned plastic latrine slabs were left unused while wooden ones, which quickly become stained with faeces, were constructed instead. The packaging from ready-to-eat meals quickly led to a solid waste problem, although some was used for fires.

Yet, more could probably have been done, despite the lack of preparation and UNHCR’s lack of financial resources. During planning meetings for Cegrane, the largest camp, UNHCR insisted that the population would not exceed 15,000 while NGOs could see from the hectares available and the planned density of tents that a much bigger camp would inevitably evolve. UNHCR insisted that no refugees would be sent there until the government-imposed construction contractor had installed water and latrines. In the event, the refugees were sent to the camp some days prematurely, by which time the contractor had installed no water and only a handful of latrines. Cegrane quickly grew to house 40,000 people. Only by ignoring UNHCR planning projections were NGOs such as Oxfam able to provide water supplies for the numbers who arrived. That there was never a shortage of food would indicate that the World Food Programme, UNHCR’s sister UN organization, used different planning and contingency figures.

The role of NATO

In the media, of course, NATO shone in comparison with aid agencies, and in the first days of the crisis, before the NGOs took over, it did indeed perform an invaluable role - digging latrines, distributing food and putting up tents. But it should be remembered that thousands of troops with large amounts of machinery were already stationed in Macedonia weeks before the bombing. NATO must have foreseen that they would face a public relations problem when the ‘humanitarian war’ that they were fighting precipitated a humanitarian crisis, and had made plans accordingly. It should also be noted that the vast majority of the food, medicine and tents distributed by soldiers were in fact provided by the UN or by NGOs. In other refugee situations, NGOs simply recruit local or refugee labour and hire local machinery.

Inevitably, NATO armies from different countries performed differently. The British forces in particular seemed to have a much better rapport with refugees and, importantly, frequently seemed to appreciate aid workers’ expertise and be ready to ask for advice and direction, with a clear intention of handing over to civilians as soon as possible. Planning the handover from military to civilian players is particularly important in the medical sector. Over the years NGOs have learned from problems caused by providing different standards of treatment, by providing parallel systems of treatment, by not using standard protocols and by not keeping epidemiological surveillance data in a standard manner. Army military units of course do not have this experience. Furthermore, as armies rarely enlist many women, children, diabetics or soldiers with heart disease, they do not stock drugs for such patients - yet these were major patient groups in Macedonia.

One consequence of the militarization of aid work was that NGOs from particular countries were often selected to work in particular camps where ‘their’ army was in control - not necessarily because that NGO was the most competent. One might suspect that this nationalization of camps was one reason that donor governments did not give adequate funding to UNHCR, directing it to their ‘national’ NGOs instead, to work in ‘national’ camps.

NATO had a good public relations machine ready in the first days. On-site photo-scanners and satellite communications were made available to journalists, enabling them to file stories with an ease and speed unprecedented in refugee camps. A more ominous consequence of NATO’s media success poses a future threat to NGOs. Newsweek and Die Zeit ran misinformed articles casting doubt on the performance of major experienced NGOs and their capacity to meet the needs of refugees. The impression emerged that only a ‘can do’ military spirit (or private companies) can efficiently deliver services to large numbers of refugees. This impression must be challenged, firstly because the perceived failure of the aid community will result in lower funding for NGOs and, secondly, because there are indications that armies will receive government humanitarian funds in preparation for humanitarian roles. There are several points to be made here. Firstly, it is unlikely that NATO armies will ever again be on the ground before any future crisis. Secondly, NGOs will almost always decide to intervene faster than governments can achieve a domestic political consensus to deploy their armies, if indeed armies are even able to get a consensus for future crises. Thirdly, and most importantly, the costs would inevitably be much higher. The cost-effectiveness of using local labour to distribute food or put up tents is hard to deny.

No doubt NATO armies will be deployed in future humanitarian crises, and in some areas no doubt armies will provide vital logistic and labour support. It is to be hoped that much has been learned by all players from this episode: that relief should be equitable and at levels that are sustainable; that parallel coordination and services should be avoided. It would appear that NATO has more to learn from aid agencies than vice versa. Most importantly, it is vital that NATO’s media success this one time in Kosovo, where it was on the ground before the crisis it initiated had even begun, does not lead to further erosion of UNHCR’s capacity.

The personal views expressed above are not necessarily shared by MSF. 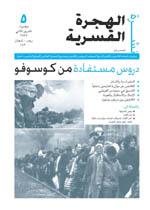