Sexual violence: a weapon of choice

Sexual violence has a profound and long-lasting physical, psychological and social impact.

The physical wounds suffered in most forms of combat are usually visible, prioritised for medical treatment and eventually healed. In contrast, while sexual violence may result in significant physical damage and severe internal wounding, it is far less likely to be treated than other forms of wounding. Handbooks for intervention in emergency situations rarely mention vaginal re-construction as a priority for surgical intervention even though sexual violence is now widely recognised as a frequent method of warfare. Médecins Sans Frontières’ 1997 handbook for emergency response, for example, had only two pages dealing with sexual violence out of a total of 381 pages.1

It is not only physically mature women who are raped during war but also children whose bodies have not yet developed and who may sustain horrific internal injuries as a result. In addition, in countries where most women and girls have undergone female genital mutilation, sexual violence can cause extensive tearing externally as well as internally.

After conflict-related sexual violence, women and girls with extreme pain and deep internal tears are often left to heal without medication or surgical intervention – and may suffer vesico-vaginal fistulae (tears) and permanent damage to the uterus and vagina and may also contract HIV or other sexually transmitted infections. If she does have access to medical assistance, a woman or girl will have to describe and show the wounds, causing her further distress.

The mental effects of sexual violence are also distinct in comparison with other forms of violence. When violence is perpetrated by a more powerful other – for example by virtue of the fact that the perpetrator is physically stronger, in a gang and/or armed – the trauma of the wounding is compounded by the trauma of being helpless. In addition, when the violence is sexual it invades a person’s most intimate space. Raped women often live with very high levels of anxiety and pain. They may find it difficult to undertake normal tasks and interact with others. Women who have been exposed to sexual violence experience great distress, may suffer periods of mental illness and are at increased risk of suicide.

Most societies will blame, ostracise and punish women – rather than men – for sexual violence. The woman or girl may well be disowned by her family or expelled by her community. The indifference of their family, community, nation and the international community reinforces the individual’s hopelessness and distress. Women and girls who have experienced sexual violence have learned that the world is not safe for females. While an ethnic or national enemy can be avoided in a post-conflict scenario, it is not possible to avoid all males. Even though a woman or girl may be able to acknowledge intellectually that the men in her community may not pose a threat to her, she must still cope with fear and traumatic memories as she interacts with men on a daily basis. This can have a significant impact on her capacity to deal with those in her community.

As their wounds are not externally visible, women and girls who have suffered sexual violence may receive little sympathy or acknowledgement of their impaired capacity to meet female workload expectations. Concessions made for the person suffering such obvious war-related incapacity as loss of a limb are unlikely to be made for those with equally severe wounding inflicted by sexual violence. The shame and secrecy associated with sexual wounding means that it is often not spoken about, even amongst women, so there is little social support for the victim.

The sense of stigmatisation, betrayal and abandonment affects a woman’s capacity to participate in community life and to raise children. Raising children requires a sense of hope about the future. A woman’s ability to meet her children’s day-to-day physical and psychological needs can be severely depleted or destroyed by her experience of sexual violence. This impacts on the development of the child’s social competence and emotional well-being. Trauma for the mother can affect the brain development of the infant in the critical first twelve months of life and thereby create ongoing health, educational and welfare costs for the community. Children of raped mothers are at increased risk of mental illness themselves and of abandonment, abuse or neglect.

When used as a strategic, systemic tool of war – as in Rwanda, Sudan, Sierra Leone, Kosovo and many other conflicts – sexual violence can lead to cultural destruction. While most violence in war is inflicted in order to kill the enemy, sexual violence is usually perpetrated not only to cause physical wounding and humiliation but also to help destroy the opposing culture. The damage to cultural and community life wrought by the use of sexual violence in warfare can persist for generations. Long-term psychological damage and ongoing suffering mean that such violence affects not only the immediate victim but also her children and grandchildren, her family, extended family and community life.

The physical wounds caused by sexual violence are also less likely to receive treatment because government and non-state actor combatants usually share a low valuation of women. No other physical wound with injuries as severe as those perpetrated by sexual violence could be ignored or de-prioritised without international outcry. Governments comprised mainly of men may not only share a low valuation of women but may also lack appreciation of the depth and breadth of the impact of sexual violence on the life of individual women and on family and community life.

National governments and the international humanitarian community are responsible for reducing the occurrence of sexual violence in conflict and for providing adequate response when it occurs. The following recommendations should be implemented in all conflict situations:

* In the emergency phase, the increased vulnerability of women and children must be recognised and their evacuation and protection needs made a national and international priority.

* The treatment of the psychological and physical wounds resulting from sexual violence needs to be prioritised in both the emergency and post-emergency phases of conflict. Treatment should be one of the top ten priorities for response in the emergency phase, along with food, nutrition and the prevention of communicable diseases.

* Data collection of cases of sexual violence and sexual injury needs to be integrated into all standardised data collection protocols used at borders and camps.

* The international community needs to ensure that swift and appropriate penalties be meted out for the war crimes of sexual violence.

Katie Thomas is a psychologist specialising in trauma recovery. She works at the Centre for International Health, Curtin University of Technology, Perth, Australia www.cih.curtin.edu.au  Email: Katie.thomas@curtin.edu.au 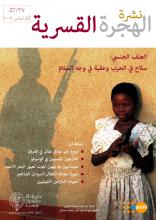