The Bhutanese government disputes the citizenship of the 96,000 Bhutanese refugees currently in Nepalese refugee camps. A new project – the Documentation of Bhutanese Refugees – sets out to disprove their argument.

In 1990-91, about a sixth of Bhutan's population was expelled from their homes from the southern districts bordering India. Today over 96,000 reside in seven refugee camps in Nepal, while another 30,000 live outside these camps in Nepal and India. Having spent ten years in exile, the refugees want to go back home. The Bhutanese government, however, has been unwilling to allow the refugees back. In negotiations with the government of Nepal and in its international pronouncements, the central argument of the Bhutanese government has been that the refugees have not come from Bhutan and are therefore not Bhutanese citizens.

The refugees are ethnically, culturally and religiously distinct from the ruling Bhutanese élite. They have been persecuted for protesting the implementation of discriminatory Bhutanese government policies targeted at the southern Lhotshampa or Nepali-speaking Bhutanese in the 1980s. The ‘One Nation One People’ policy required all the different ethnic groups to accept the culture, language and dress of the ruling elite, while ‘New Citizenship’ arbitrarily revoked their Bhutanese nationality. Demonstrations against these policies in September 1990 were followed by thousands of arbitrary arrests, torture and detentions without trial, raids on villages, degrading treatment, gang rape, closure of almost all schools in southern Bhutan, restriction of health services, a ban on the movement of essential commodities and people, confiscation of citizenship cards, termination of employment; and burning and demolition of houses. People previously classified as bona fide citizens were pressurized into leaving Bhutan because they had relatives who had been detained as political prisoners or who had participated in the democracy movement.

In the early 1990s the local district authorities, with the full backing of the armed forces, began ordering villagers to leave the country – or face severe consequences. Families were ordered to submit an application requesting the government to ‘allow’ them to leave the country by signing the ‘Voluntary Migration Form’. The whole painful exercise of submitting the application for migration was videotaped with the petitioner required to ‘smile’ to the camera. More than 60 per cent of the families currently in the camps in eastern Nepal had to undergo this process. Most families in these southern districts had little choice but to comply. In several cases whole villages were uprooted. Families were given so little time to leave the country that most did not even have time to collect their basic belongings.

By the end of 1992, more than 80,000 Lhotshampas found themselves seeking asylum in the UNHCR-established camps in eastern Nepal. These people were forced to leave behind millions of dollars worth of property accumulated over generations and are now reliant on assistance from the international community.

Reallocation of land and property

Prime lands in most of the six southern districts of Bhutan, the area of origin of the bulk of the refugees in the Nepalese camps, have been reallocated to northerners, most of whom are ex-servicemen and their relatives. Strategic and commercially valuable land has been given to senior officials serving the present regime. More remote fertile land that has lain fallow since the original inhabitants were forced out is now being given to northern Bhutanese. In order to entice them to settle in the south, the government is providing free building materials and financial assistance and re-opening facilities closed in 1990. More such reallocation of land and other property to the northern Bhutanese is in the offing, thus sealing the fate of those Bhutanese stranded in Nepal and India.

The Bhutanese government has also been busy renaming places in the south of Bhutan to make them sound more like places in northern Bhutan. Chirang, for example, is now known as Tsirang, Sarbhang as Sarpang.

Various efforts to promote the early return of these refugees have so far not been very successful. Ten years and umpteen bilateral meetings of Bhutanese and Nepali ministers have so far only succeeded in dividing the refugees in the seven camps into four categories. While ongoing resettlement and expropriation schemes in Bhutan further complicate the talks, the Bhutanese government is succeeding in its efforts to avoid the refugee issue coming under international scrutiny.

The best course of action to promote the early return of the Bhutanese refugees would be through the establishment of an impartial and independent verification commission. The international community, with the involvement of UN agencies, should encourage the Bhutan-Nepal bilateral committee and their respective governments to demonstrate their willingness to resolve this protracted problem, rather than continue to hope that the problem will be solved solely through the bilateral negotiations.

AHURA Bhutan’s Documentation of Bhutanese Refugees project aims to be a useful and effective advocacy tool to authenticate the Bhutanese refugees’ nationality status and to promote their rights to nationality, return and restitution of property.

The primary objectives of the project are to prove that residents of the seven refugee camps are bona fide Bhutanese citizens with incontestable documentary evidence of their origin, nationality and property rights in Bhutan. (Electronic storage is being used to safeguard this evidence from risk of loss or deterioration). The project further aims to seek support for establishing a mechanism for an impartial and independent verification of the property and return rights of Bhutanese refugees which is based on internationally accepted human rights norms and principles. The goal of the project is the early return of Bhutanese refugees and full restitution of their property and other fundamental rights.

Work on the Digitalized Database of Bhutanese Refugees started in January 1999. 18 full-time staff members worked from January 1999 to March 2000: three in organization and management; three in computing; five in research; seven as general volunteers. Information was collected in the camps with assistance from volunteer camp residents and was subsequently verified by former village headmen, deputy headmen and village elders resident in the camps.

Information about the documentation project was disseminated to the refugees through leaflets, sample demonstrations, and verbal information through volunteers. The project team developed a standard information collection format. Refugees came to the project office in Damak and were interviewed by volunteers trained in interviewing; any other information which could not given by the interviewee then involved a camp visit.

All the relevant information about the refugees is stored in such a way that it is easy and fast to access and retrieve. Each Thram1 holder’s family and property details, plus important documents, are organized and collated on a family, block and district basis. Documentary evidence, including Citizenship Identity Cards, Land Tax Receipts, and photographs of houses and land, can be readily accessed.

The project met with some obstacles along the way although it is possible that these problems are endemic to the Bhutanese refugee context only. Occasionally the project experienced some technical (computer) and planning/implementation hitches but these were successfully resolved and there were no problems relating to human resources. Yet the project team was unable to complete the documentation of 100 per cent of the refugee population, due mainly to the unwillingness or apathy of sections of the population. There is some evidence that some of the population were misinformed and misguided by various factions; others appeared genuinely unconvinced as to the usefulness of the database. The team’s decision to release the work completed to date is to gauge whether it will motivate the rest of the population to see the benefit of this exercise and participate in the next stage of the documentation. The project team has not yet been able to identify how this obstacle might have been overcome earlier in the project implementation.

The main project output – the Digitalized Database of Bhutanese Refugees, Part I – was released in early April on a CD-ROM which is being distributed to concerned governments and international human rights bodies. A sample of the database is accessible on the internet [see details below], with a summary report and background information on the database which includes district-wide samples of details of families, properties and documentary evidence of Bhutanese origin and nationality.

The results of this project should definitively establish the rights of Bhutanese refugees to return to their homeland and to reclaim their land and property.

Dilip Bishwo is Secretary for the International Campaign. 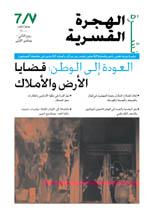