Interview: Walter Kälin, Representative of the UN Secretary-General on the Human Rights of IDPs

Professor Kälin, in September 2004 you were appointed the ‘UN Secretary-General’s Representative on the human rights of internally displaced persons’. Your predecessor, Dr Francis Deng, did not have the words ‘human rights’ in his title. Does this indicate a change in the mandate?
When Dr Deng’s mandate was created by the UN Commission on Human Rights in 1992, there was acknowledgement that internal displacement was a serious human rights problem but in the absence of a treaty on the rights of internally displaced persons, or any provision in a human rights convention explicitly guaranteeing the rights of IDPs, it was almost impossible to assert that IDPs as such had human rights. Of course, as human beings, IDPs when they become uprooted do not lose their human rights but it was unclear what these rights specifically meant in the context of displacement. Since 1998, the Guiding Principles on Internal Displacement have identified the human rights that are of special relevance for IDPs and have spelled out, in more detail, what is implicit in these guarantees. The change in title of my mandate suggests that the concept of the human rights of IDPs is, at least in principle, accepted today by the international community and indicates a certain redirection of the mandate as it puts more emphasis on the protection of the rights of IDPs.

How do you see your work interfacing with that of other key IDP actors such as the OCHA Inter-Agency Internal Displacement Division (IDD) and the Global IDP Project?
We have complementary mandates and cooperate with each other on the basis of a tripartite Memorandum of Understanding, signed in November 2004, which spells out our respective roles. IDD’s main focus is to support UN country teams in developing and implementing a collaborative response to situations of internal displacement; the Global IDP Project continues to run its database and conduct training on the Guiding Principles; while I focus on advocacy for the rights of IDPs. Our cooperation translates into specific actions. For example, I am planning to conduct some country missions jointly with IDD and, as part of my mandate to mainstream the human rights of IDPs into all relevant parts of the UN system, I have asked the Global IDP Project to submit relevant information on the human rights situation of IDPs to treaty bodies on a regular basis with a hope that those bodies will address the issue of internal displacement more regularly in the future.

However, efforts to make the Guiding Principles effective on the domestic level should go beyond general references in legal and policy documents. One of my priorities will be the development of a handbook to show law and policy makers how to translate general principles into specific norms and thereby provide domestic authorities with detailed guidance on how to develop a national legal framework. My hope is that this will encourage governments to do more to implement the Guiding Principles at the domestic level. This, I believe, is the most promising approach to strengthening the normative framework at a time when the international community is still not ready to adopt a binding instrument that accords with the protection level set forth in the Guiding Principles. Of course, this initiative does not exclude the possibility of a binding instrument once a sufficient number of states have developed national policies and laws. It may even become possible to first draft a binding instrument at the regional level and then eventually to take it up to the international level.

Many international organisations and NGOs use the Guiding Principles but here too the challenge is to make them operational by incorporating them into policies relevant to displacement and building up organisational capacities. One very important aspect of mainstreaming the Guiding Principles is to identify their relevance for UN peacekeeping and civilian missions in countries with internal displacement. Despite the complexity of such missions and their limited and focused mandates, I feel that more could and must be done to integrate the human rights of IDPs into their activities.

Many governments, including those of states with some of the world’s highest IDP populations, are still reluctant to use the term 'IDP' or to protect and assist the displaced in line with the Guiding Principles. How do you plan to address these constraints?

The Representative has a range of tools at his disposal. The most evident is persuasion and I have begun to engage a number of governments in dialogues on displacement in their countries. From my predecessor I have learned that governments, which initially did not acknowledge IDPs in their countries, often came around through dialogue to recognising the problem and to adopting policies to address the situation. Undertaking missions to affected countries is another important means of influencing government policy as it enables the Representative to engage with a wide range of actors, both governmental and non-governmental, in discussions about displacement. In April, I will undertake my first full-scale country mission to Nepal. In cases where governments are reluctant to extend an invitation, it may be necessary to engage senior UN officials, the Inter-Agency Standing Committee and donor governments to encourage greater access. The publication of reports can also have impact, since the reports become documents of the Commission on Human Rights and the General Assembly. Further, the issuance of public statements can have effect. My first public statement, which garnered press attention, was on Darfur and protested against the forcible relocation of IDPs. Meetings are also valuable in raising consciousness to protection issues and mobilising the different actors to press for change.

In many parts of the world IDPs live in areas controlled by non-state actors. Can more be done to assist and protect them?

First, it is important to insist that governments allow access to areas of their countries controlled by non-state actors. Even though working with non-state actors in the post 9/11 world has become especially sensitive and complex, concerted efforts need to be made by UN agencies to gain access to IDPs or to work with church groups and NGOs to reach these populations. It should be unacceptable for large numbers of IDPs to be inaccessible to international aid, with the result of massive loss of life, as was the case in Angola and now Darfur.  Second, it is important to make the non-state actors aware of their responsibilities under international law toward IDP populations, so that they do not bar access or otherwise violate IDP rights. To remind non-state actors of their responsibilities toward IDPs, seminars on the Guiding Principles can be a useful vehicle, such as the one held with the SPLM/A in Sudan in 2002, organised by UNICEF and the Brookings Project on Internal Displacement.

Isn’t it anomalous that IDPs are not represented by a single UN agency, analogous to UNHCR? In an ideal world, should they be? If so, what are the prospects of this happening?
For the timing being, the UN is promoting the so-called ‘collaborative approach’ which was recently reaffirmed by its Inter-Agency Standing Committee in a policy document entitled ‘Implementing the Collaborative Response to Situations of Internal Displacement’. This approach has its strengths and weaknesses. On the one hand, it makes sure that all agencies share the responsibility of responding to the worldwide crisis of displacement which is probably too big for one single agency to deal with, and it has the potential of drawing upon the multitude of experiences and specialised knowledge of each of the agencies. On the other hand, the collaborative approach makes it very difficult to hold an agency accountable if IDPs are neglected, and it fails if none of the agencies assumes a leadership role or if others contest that role. Even in an ideal world it is difficult to imagine one single agency that would be able to respond effectively to the needs of all IDPs, including those displaced by natural or human-made disasters or development projects, to address protracted situations where development may become more relevant than humanitarian issues, or to make sure that IDPs can vote when elections are conducted with the involvement of the UN. What we need are clear rules to establish which agency would do what and in what kinds of situation. For example, it is obvious that UNHCR is the organisation with the most experience and capacity to protect and assist persons displaced by armed conflict who are in camps or to organise IDP returns in safety and dignity after the end of the conflict. Indeed, it is difficult to understand why there should not be at least a presumption that the High Commissioner for Refugees should assume responsibility in such situations.

Critics argue that the IDD, OHCHR and UNHCR have played, or been allowed to play, only a minor role in the ongoing Darfur crisis. They suggest that response to the ongoing IDP crisis in Darfur only confirms that the UN’s ‘collaborative approach’ is failing IDPs, especially as regards protection. Are these criticisms fair?
I agree with those who say that the collaborative approach has not worked well in Darfur. By contrast, it has been successful in the case of the tsunami disaster. The problem in Darfur was that the collaborative approach allowed agencies to say “no” to playing specific roles, especially in the area of protection, and gave the government the possibility to opt for solutions that it found the least threatening. Despite this slow and tortuous beginning, the Secretary-General reported to the Security Council in March that the numbers of human rights observers and staff “working on protection issues” have increased. However, the total remains less than 100 and not all have the training needed to carry out protection functions effectively.

Darfur has been high on the international media agenda but what other hidden or forgotten crises concern you? And how should the UN and international community be responding?
There are many forgotten crises and it is difficult to rank them according to their seriousness. The figures and protection needs of displaced persons in the Democratic Republic of Congo and northern Uganda certainly reach those in Darfur or even surpass them. In Somalia, where there is no functioning government, IDPs are largely forgotten and aid often cannot reach them because they are in regions inaccessible to the international community. Large numbers of IDPs are also off limits in Burma. There are, in addition, protracted situations of displacement, like in the South Caucasus where large numbers of IDPs remain displaced for more than a decade and become largely forgotten despite the hopelessness and abject poverty in which they live. Each situation has its unique features and there are no easy recipes for the UN. However, public relations campaigns are needed to shine the spotlight on forgotten crises. So too is a better integration of IDP issues into the policies and guidelines of the different international agencies as well as the engagement of the donor community in bringing attention to these situations. Steps also should be taken to involve political actors in addressing the root causes of these crises and to help build capacities at the local level to address them more effectively.

For several years FMR has played a role in drawing attention to IDP issues and publicising the GPs. Do you have any thoughts on how we may better do so?
I have read FMR for a long time and am impressed by the relevance of the topics chosen and the high quality of the contributions. Your circulation of the magazine in Spanish and Arabic and your recent decision to add a French version are important steps to making your information available to a wider readership. Many of the articles are important tools for researchers, students, activists, governments and international agencies – and a long time after their publication. An electronic archive organised around main themes, with the titles of relevant articles immediately visible and easily retrievable, would be helpful. 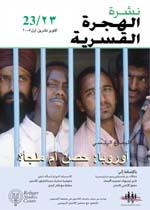