In FMR 18 Jeff Crisp asked: “Why do we know so little about refugees? How can we learn more?” This article reflects on these questions as they relate to education and particularly to education for Afghan refugees in Pakistan.

Humanitarian aid is traditionally seen as a logistical and practical activity and little attention has been paid to the need for analysis. However, things are changing. UNHCR, UNESCO and others have begun to collect examples of ‘good practice’ in the field of refugee education. It is encouraging that UNHCR’s Education Unit in 2004 initiated a series of regional meetings to document, discuss and learn from experience.

Most of the 170,000 Afghan refugee pupils in camps in Pakistan are in primary schools. Some 6,000 teachers work in hundreds of schools in the camps, run mainly by international NGOs and, in the case of secondary schools, by the Government of Pakistan and the International Rescue Committee (IRC). Most funding is provided by UNHCR, with some topping-up by NGOs and bilateral donors. In addition, there are, or have been, a large number of urban self-help schools. Two and a half million Afghan refugees have returned home from Pakistan to Afghanistan over the last three years but there are still well over one million refugees living in the camps with at least another half a million in the urban areas.

When I first began my work in refugee education in Pakistan in 2000, the lack of statistics and other data about the adult, adolescent and child populations was one of my first surprises. As far as I am aware, there has only been one major, independent evaluation of refugee education in Pakistan during the last five years.>[1] The many NGOs in Pakistan possess a vast amount of information but it is scattered and not always collected in a comparable way. Independent evaluations are sadly missing.

The other surprise was the lack of a professional coordinating body. Partners shared some information but otherwise operated independently. Activities were monitored by donors but such monitoring is often administrative and pays little attention to substantive matters. The Education Committee of the Agency Coordinating Body for Afghan Relief (ACBAR [2]) lacked stable funding and professional personnel and therefore was not able to play the significant role one might have hoped for. UNESCO’s Pakistan office provided some professional inputs and promoted information sharing and coordination but many organisations, individuals and practices were already so fixed in their ways of working that things tended to continue the way they were. A professional coordination body is urgently needed, even at this late stage in the Afghan refugee era, run perhaps by a consortium of international organisations, NGOs and Afghan/Pakistani educational experts and institutions.

Whenever closer cooperation did take place, this was appreciated by partners. Examples of such initiatives were UNICEF’s work with ACBAR’s Education Committee and UNESCO’s work with GTZ and other UN organisations and NGOs to develop a database of 5,000 Afghan teachers. The database was handed over to the Afghan Minister of Education in 2003 but has not yet been made full use of, mainly due to an overburdened administration in a country under reconstruction and lack of initiative by relevant UN organisations. UNHCR is currently using this as an example to be replicated in South Sudan.

Those of us in the refugee education sector must professionalise our work and do what we can to learn along the way. This includes: 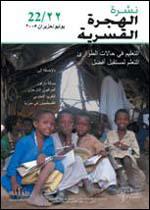