Displacement only ends with safety and choice

Unless the international community can agree when displacement ends, displaced people risk being pressed home to unsafe areas by authorities and agencies swearing that all is well. An end to displacement like this is a type of forced displacement.

Elsewhere, government artificially prolong the problem. In Azerbaijan and Georgia, in an attempt to emphasise their sovereign rights over secessionist regions, authorities have not supported local integration. Even in states that legally recognise displaced people, governments can arbitrarily end that recognition (see p?). IDP status can be withdrawn in Croatia and Georgia simply because a person changes their address - in Azerbaijan and Russia when they find permanent housing. In Bosnia, Colombia and Croatia, IDP status can end when an IDP refuses a state-given solution. In Bosnia and Russia, it ends after a set period of time following return or resettlement.

Without procedures to judge when displacement really ends, agencies may not be able to resist going along with arbitrary government policies, even when those authorities displaced people in the first place and showed obvious disregard for their well-being.

When displacement ends also matters to information agencies like the Global IDP Project. Monitoring IDP crises in 50 conflict countries, we must decide when displacement comes to an end and when to stop monitoring.

Overall, agencies have much to gain from clear criteria for when displacement ends. Realising that an end to displacement is rarely clear-cut, policy makers are wisely developing criteria to reflect how displacement gradually comes to an end. But any agreement on when displacement ends must emphasise safety, freedom of choice and IDP participation. Unless safe conditions have been established and displaced people choose a solution voluntarily, solutions cannot be considered durable.

Safety must be seen in a broad sense. Obviously, it means the threats that forced people to flee in the first place have been removed. But it also means ensuring that there is adequate protection from threats such as physical attacks, rights abuses and landmines, as well as provision of adequate humanitarian aid and support for essential needs over time.

IDPs must be able to choose solutions to their problems. Ideally, IDPs should be able to choose between return, resettlement or local integration on the basis of impartial information and assured assistance. Return cannot be voluntary, for example, if the government cuts off aid to encourage IDPs to return, as in Russia. Sometimes, safe return to home areas under hostile authorities may have to be enforced by the international community, as in Bosnia.

Finally, IDPs should be involved in all decisions to end their displacement. It is worrying that the voice of displaced people themselves has so far been absent in the international debate about the end of displacement.

Andrew Lawday is advocacy coordinator at the Global IDP Project. 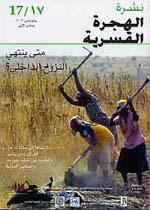