Why do we know so little about refugees? What can we do to learn more?

A number of recent UNHCR evaluations suggest that the organisation knows less and less about the refugees it is mandated to protect. Recent events in West Africa, where a number of humanitarian personnel were implicated in the sexual exploitation of refugee girls(1), confirmed the impression that UNHCR and other aid organisations have a very limited understanding of the social dynamics of refugee situations

Seeking to understand the origins of this problem, UNHCR's Evaluation and Policy Analysis Unit (EPAU) asked a number of staff members why the agency has lost contact with its beneficiaries. The answers received provide valuable insight into the changing conditions under which humanitarian personnel are obliged to work.

Many respondents pointed to the fact that security in refugee-populated areas is much weaker than it was a decade ago - a development evidenced by the abduction and murder of UNHCR staff in a number of locations. While UNHCR staff were once able to live and work amongst refugees, they are now more commonly based in provincial centres, a long and often difficult drive away from the nearest refugee camp.

Many staff members also pointed to the way in which email and the internet have penetrated even the most remote UNHCR offices, making it possible for staff to spend much longer periods of time in their office - and much less time interacting with refugees. The organisation's reporting requirements have increased substantially in recent years, obliging field staff to sit at their computers for hours on end. Ironically, the new emphasis on accountability in the humanitarian sector has thus distanced UNHCR from the very people it is supposed to protect!

Our staff also told us of their concerns about the limited number of UNHCR personnel in frontline refugee locations. The difficulty of filling posts in difficult duty stations, coupled with the introduction of new regulations allowing staff posted to such locations to take regular 'rest and recuperation' breaks, has led to a reduction of UNHCR's field presence. This trend has been reinforced by the delegation of many operational responsibilities to NGOs and other implementing partners.

Employees also pointed out that the impetus to get out of the office and to mingle with refugees has been considerably reduced by UNHCR's inability to provide them with the protection, assistance and solutions which they need. "It's very difficult to talk with people when you know you cannot satisfy their requests for relief or resettlement opportunities, and who may be quite angry as a result," suggested one respondent.

Others told us that UNHCR's interaction with refugee communities, especially those which have lived in exile for long periods of time, is hampered by the unrepresentative nature of the committees established to provide refugees with some form of organised leadership. As Tania Kaiser concluded when she visited Guinea to undertake an evaluation for UNHCR, "the refugee committees are extremely variable, and some ordinary refugees have nothing to do with them. Committee members are often considered to be 'big people', in some cases corrupt and self-serving." This problem is evidently compounded when UNHCR and other humanitarian personnel deal only with committee members and fail to interact with other refugees.

Confronted with the challenge of learning more about refugees and other people of concern to UNHCR, EPAU is:

FMR readers experienced in the use of sample surveys in refugee situations are invited to contact EPAU at hqep00@unhcr.ch.

Some of the issues raised in this article are also examined in 'Researching refugees: some methodological and ethical considerations in social science and forced migration', by Karen Jacobsen and Loren Landau, 'New Issues in Refugee Research', no. 90, available under 'Publications' on the UNHCR website, www.unhcr.ch. 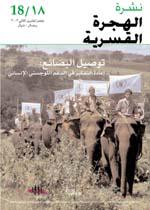