Refugees and the African Commission on Human and Peoples' Rights

On paper, African refugees benefit from one of the world's most progressive protection regimes. In reality, however, they face endless human rights hurdles involving forced return, discrimination, arbitrary arrest and detention, restricted freedom of movement and expression and violations of social and economic rights.

Faced with an ongoing struggle to bridge the gap between theory and reality, advocates for refugees have the option of using Africa's human rights mechanisms innovatively to argue the case for refugee rights. It is not that Africa is short of norms. Far from it; in many respects the 1969 OAU Convention Governing the Specific Aspects of Refugee Problems in Africa puts the continent ahead of other regions. In addition to introducing an expanded notion of who is a refugee, the Convention reinforces key refugee protection standards, including the closely linked principles of non-refoulement and voluntary repatriation. The Convention is an important regional complement to the 1951 Convention. Together, these instruments articulate an important set of standards regarding the treatment that refugees should expect to receive in exile.

The crisis facing refugees on the continent reflects rather a failure of implementation. A major weakness of the current international legal framework to protect refugees - one that was recognised during the ambitious UNHCR Global Consultations process - is the absence of any meaningful system of supervision, such as a court or treaty body, to ensure that States abide by the letter and spirit of international refugee conventions. International and regional human rights mechanisms - and in particular the African human rights system - may go some way towards making up for this lacuna by providing advocates with a complementary means to help refugees and asylum seekers actually benefit from rights they have on paper.

The centrepiece of the African human rights system is the 1981 African Charter on Human and Peoples' Rights and its principal overseer the African Commission on Human and Peoples' Rights (ACHPR) which was established in 1987. Apart from Morocco all 53 African States have accepted the provisions of the Charter as formally binding. The legal framework established under the Charter offers refugees and asylum seekers (as well as the NGOs that represent them) the possibility of individually petitioning the ACHPR to seek protection of violated rights. This includes specific rights by virtue of being refugees and asylum seekers as well as more general human rights guarantees set out in the Charter. In fulfilling its central oversight role, the ACHPR takes into account the UN and OAU Conventions as well as other regional arrangements in which refugees have freedom of movement and residence in regions such as ECOWAS under the Community of West African States.

Recourse to the ACHPR enables refugees and asylum seekers to bring claims against the host country where refugee law is deficient or inadequate, and opens up the prospect of claims against countries of origin on the basis of continuing violations of their rights based on the fact of persecution and flight to other States. Moreover African governments are required to ensure that the protection of the Charter is available to all persons within their jurisdiction, whether they are nationals or non-nationals. Governments are thus accountable before this system not only for how they treat refugees, but also IDPs and migrants generally.

The African Charter is the gateway to the ACHPR and understanding how the rights articulated in the Charter can be put to work for refugees is the starting point for any advocate. Two general guarantees - the principles of non-discrimination and equality in Articles 2 and 3 - can be used to protect any rights that refugees or other individuals are entitled to. Responding to a complaint brought by the Organisation Mondiale Contre La Torture and others against Rwanda, the ACHPR found that the expulsion of Burundian Hutu refugees from Rwanda was a breach of non-discrimination under the Charter. The guarantee of non-discrimination can thus be used to protect refugees from discrimination on a wide variety of grounds including their status as refugees, their race, ethnic group, colour or gender. The principle of equality and equal protection of the law offers refugees additional protection against mistreatment by the legal and institutional system of the State. When combined with the duty of States under Article 1 to take steps to implement the rights contained in the Charter, these provisions may provide advocates with an avenue by which to address problems commonly encountered by African refugees - the lack of national refugee legislation and appropriate documentation of their status- which in turn inhibit the enjoyment of many other Charter rights

Of the specific Charter rights that can be of use to refugees and asylum-seekers, the right to seek and obtain asylum has a number of elements that advocates can seek to assert and develop before the ACHPR. The first and most important is that of gaining entry and access to the territory of the host State, including its status determination procedures, for the purpose of seeking asylum. The OAU Convention strengthens this principle by prohibiting States from rejecting asylum seekers at the frontier or border. The 1951 Convention underlies the same principle under Article 31 by stating that asylum seekers should not be penalised for making direct illegal entry.

A second element of the right to seek and obtain asylum concerns lawful admission through obtaining or enjoying asylum in accordance with the laws of those countries and international conventions. This element depends on whether the asylum seeker meets the criteria for refuge as set out in domestic law and international conventions. One area of potential inquiry for advocates is whether state practice complies with both the Charter and international law on the issue of persecution. ACHPR decisions show that persecution is established by reference to violated rights and subsequent flight.

Implied in the right to seek and obtain asylum is an obligation on States parties to the African Charter to establish institutions and fair procedures for status determination. Although the ACHPR has yet to rule on whether the due process guarantees contained in Article 7 would extend to status determination procedures, one can speculate that this would indeed be the case. This conclusion is fortified by the provision of Article 26 that requires States parties to "allow the establishment and improvement of appropriate national institutions entrusted with the promotion and protection of the rights and freedoms guaranteed by the present Charter." Fair procedures in this context would include extending legal assistance to refugees in status determination processes.

Article 5 of the Charter, which notes that every individual shall have the right to "respect of the dignity inherent in a human being and to the recognition of his legal status" and which prohibits "all forms of exploitation and degradation ….particularly slavery, slave trade, torture, cruel, inhuman or degrading punishment and treatment", is also of particular importance to refugees. The Article prohibits States from expelling or returning anyone to a place where they are likely to be subjected to such treatment. Moreover, a violation of Article 5 (which clearly encompasses victims of rape and sexual abuse) also entitles the victim to the right to seek and obtain asylum.

Of particular note is the ACHPR's willingness to interpret Article 5 to include violations of social and economic rights. For instance, in the absence of an express guarantee of a right to housing in the Charter, ACHPR has based protection for such rights on the guarantee of human dignity, and the prohibition of torture, cruel, inhuman and degrading treatment.

Article 16 of the Charter articulates the right of every individual to enjoy the best attainable state of physical and mental health and the duty of States to take necessary measures to ensure this. Five related cases in Mauritania alleged that between 1986 and 1992 black Mauritanians were enslaved, arbitrarily detained and routinely evicted or displaced from lands that were then confiscated by the government. At issue (at least in part) were the conditions of detention which some of these individuals encountered. In finding violations of Article 16, the ACHPR noted the lack of food, blankets, adequate hygiene and medical attention, the latter having led to the deaths of a number of prisoners. The Charter may thus provide an important avenue through which to raise a host of social and economic rights questions including the issue of sub-standard camp conditions.

In conclusion, the African human rights system has much to offer those advocating better implementation of refugee rights. It is not, however, a panacea for all the ills facing Africa's refugees and asylum. The ACHPR should be seen as a complementary source of protection for refugees. Taking a case to the Commission can be a lengthy and time consuming process and can only be pursued when other domestic remedies have been exhausted. Success is not always guaranteed.

Prospects of success could be considerably enhanced where advocates work together nationally, regionally and internationally to research, compile and sustain a case before the ACHPR. Similar cooperation is necessary to maximise the advocacy impact of the eventual decision, whether positive or negative. Making use of institutions and mechanisms which African states have themselves established, and nurturing their ability to address the plight of refugees, would add an important weapon to the refugee advocacy arsenal in Africa.

The authors are finalising a step-by-step advocates' guide on how to access and use the African Commission on Human and Peoples' Rights. 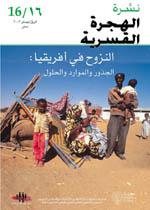