Palestinians in the aftermath of 11 September: wishing refugees out of existence?

While the international community expects that the population of Afghan refugees will eventually return home, the equally numerous Palestinian refugees see no prospect of return.

Israel, more than any other country, has jumped on the American bandwagon of 'anti-terrorism's global war' in the aftermath of the tragic events of 11 September. As Israel invades Palestinian self-governing areas and dismantles and destroys the institutions of the nascent Palestinian political entity agreed upon in the 1993 Oslo peace accords, Palestinian refugees find themselves, once again, at the receiving end of a simplistic and dangerous discourse that sweeps away their aspirations for justice, freedom and peace.

There is an international consensus that the cornerstone of a political settlement and resolution of the Palestinian refugee question is the establishment of a viable Palestinian state. Israel's refusal to withdraw from occupied territories and its continuing annexation of land and expansion of settlements have led to the current impasse in the peace process and a circle of violence that has led to innocent people being killed and needless suffering for both peoples.

Despite the Palestinians having agreed to a historical compromise based on a two state solution, the peace process, with its promise of statehood, is deadlocked. The national liberation struggle of the Palestinians against occupation is being portrayed by Israel as a form of terrorism which ought to be crushed. Refugee camps have become the main targets for the Israeli army, subjected to unprecedented levels of brutality, demolition and destruction while the services of UNRWA (the UN agency charged with aiding Palestinian refugees), the Red Cross/Red Crescent and other humanitarian agencies have been severely disrupted and blocked.

For Palestinians in the diaspora communities hopes of return to their homeland have been shattered. Like other immigrant communities they live in worry and fear in the midst of a less tolerant climate in the host countries, brought about by measures taken following 11 September.

Israel's establishment in British-mandated Palestine in 1948 and the annexation by Jordan of the West Bank led to Palestinians not only losing their homeland but also, for the majority, any claim to citizenship. Three legal instruments enacted by Israel in the early 1950s (the Absentee Property Law, the Law of Return and the Citizenship Law) classify dispossessed Palestinian refugees as 'absentees' (thus nullifying rights to property restitution, residence and citizenship) while stipulating the right of any Jew anywhere in the world to unrestricted immigration, settlement and automatic citizenship.

Israel regarded those Palestinians who remained within its 1948 borders as residents but not citizens. Only in the early 1980s did they all gain citizenship. When Jordan annexed the West Bank in the early 1950s it adopted similar policies. As a result, the remainder of the Palestinian population of former Palestine were doomed to live as stateless refugee holders of Travel Documents issued by the Arab host countries: Jordan, Lebanon, Syria, Egypt and Iraq. This is the situation of those resident in the West Bank and Gaza. Today more than half of the estimated total population of eight million Palestinians are refugees and stateless.

Since Israel occupied the rest of Palestine in 1967, it has pursued a policy of administrative ethnic cleansing, especially in occupied East Jerusalem.(1) It is estimated that over 250,000 of the population of the West Bank and Gaza who were outside the territories at the time of the occupation were not allowed back and so became refugees, some for the second time. The rest of the population in the occupied territories were again considered by Israel as residents and not citizens. Israeli laws applied to foreign residents were applied to Palestinians in these territories. Yet more Palestinians, estimated to be around 150,000, lost their ID cards and their residency rights because of further Israeli imposed measures.

Since Oslo, more Palestinians have left because of oppressive measures and the hard economic conditions caused by restriction on movement of people (and goods) other than those who have been permitted to return to reside in areas controlled by the Palestinian Authority. Successive Israeli governments have encouraged massive immigration to strengthen its grip on the occupied territories. In contradiction of the spirit of Oslo, the annual growth rate in the settler population in the last decade has been over 8%.(2)

Palestinians are excluded from the international protection regime for refugees and stateless persons because their displacement predates the creation of UNHCR. Article 1D of the 1951 Convention on the Status of Refugees and Paragraph 7(c) of the statutes of UNHCR stipulate that persons already in receipt of assistance from other UN agencies do not fall under the mandate of UNHCR. Unlike UNHCR, UNRWA offers only relief and assistance, and not protection. Its mandate is restricted to Palestinian refugees in Jordan, Gaza, the West Bank, Syria, Lebanon and Egypt, not to those who live in other Arab countries or in communities outside the Arab world.

Arab states have argued, and most continue to argue, that Palestinians should not be included within the international refugee regime lest this mute the voicing of their national rights. Although Arab states have agreed in principle to grant full citizenship rights equivalent to those of their citizens, they have stopped short of agreeing to naturalisation. Agreements and commitments made by Arab states have not been honoured. Full residency and social and economic rights for Palestinians are denied in most host Arab states, most particularly for the 400,000 Palestinian refugees in Lebanon.(3)

Takkenberg has noted that it is statelessness, the absence of the option of returning to their country, the denial of even the right to have rights, which is at the heart of the Palestinian refugee problem. Changing the status of Palestinians from refugees to citizens is key to the cessation of the Arab-Israeli conflict. The right of return and the right to compensation and full citizenship in the countries in which they reside are not only basic human rights but are also complementary rights which should not be seen to cancel out one another in any way.

The Palestinian refugee question could be resolved if and when a fully-fledged sovereign Palestinian state is established within the framework of a comprehensive regional peace settlement. Any settlement has to widen rather than limit the options for refugees. A settlement package must include either the right of repatriation in accordance with UN resolutions or compensation and full citizenship rights in host countries for those who choose not to return or who are not allowed to return to homes of origin in pre-1948 Palestine.

Until this happens, Palestinian refugees should no longer be excluded from the general international legal regime created for the protection of refugees and stateless persons. Recent events have shown that the 'passive protection' introduced by a restricted number of international observers is not the answer. They cannot offer the level of protection which is needed and, indeed, their presence obscures the need to go beyond the limited nature of UNRWA's mandate.

Abbas Shiblak, a writer and journalist, is one of the founders of SHAML - the Palestinian Refugee and Diaspora Centre - www.shaml.org. Email: shiblak@lineone.net 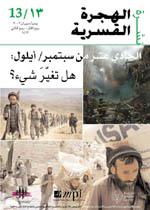