When I joined UNHCR I had lofty but imprecise ideas as to what my job would entail.

These were fundamentally borne of my academic grounding in UN law, international promotion and protection of human rights. I reminded myself of the basic principles of refugee protection in the 1951 Convention and read documents on UNHCR’s evolving mandate. I saw the challenge as being all the more exciting because I would be helping to protect refugees; people who had fled their countries due to gross violation of their human rights. I felt rich in theory, raw and ready to grapple with practical issues.

UNHCR's mandate is the protection of refugees, and I was going to serve in the Dadaab protection unit. Dadaab, in an isolated region regarded by many Kenyans as a ‘bandit zone’, was under a constitutional state of emergency until the early 1990s. It has three refugee camps housing approximately 127,000 refugees from Somalia, Ethiopia, Eritrea, Sudan, Uganda and Congo, the overwhelming majority being Somalis.

Protection work in Dadaab centres around listening to and addressing refugee grievances; screening and registration of asylum seekers; assisting refugees in securing the available durable solutions (resettlement and voluntary repatriation); helping the government administration to, as far as possible, ease movement of refugees in and out of the camps through expeditious issuance of travel documentation and, more generally, monitoring and assisting refugees to secure fundamental human rights. From the outset, my colleagues within the unit drummed into me the maxim of protection practice: strive to be proactive but be prepared to react when necessary.

The protection unit in Dadaab is the de facto confessional for every transgression, past, perceived or potential, that afflicts the refugee. Paradoxically, most complaints against the Sub Office were levelled against the protection unit. Yet if refugees were to be asked for the one unit that they would like to keep were all others to be scrapped, one could bet on their choosing protection. To the average refugee, having a complaint heard by the protection staff (especially the Protection Officer) meant they were halfway to getting it resolved. They imagine UNHCR to be a ‘super government’, operating above and autonomous of the government of Kenya. The refugees see protection staff as private counsel, people to represent them in just about any problem. Protection in Dadaab is thus about dealing with the conventional and the unconventional and taking the flak for everything that the UNHCR office has failed to deliver and or has delivered unsatisfactorily.

For UNHCR staff it is a most edifying feeling when one sees the transformation in a refugee after the successful resolution of a grievance. Getting there requires patience, listening and analytical skills, appreciation and accommodation of socio-cultural values, firmness on occasion and, for good measure, ability to deal with frustrations – time and time again.

The fact that Kenya has no legislation on refugees leaves almost every aspect of protection to UNHCR. Though a signatory to the relevant international conventions, Kenya is a dualist state in which treaties have to be incorporated into municipal law if they are to have domestic applicability. UNHCR thus finds itself walking the ‘thin red line’ between what is permitted under international agreement and what may be construed as treading on state sovereignty.

Another challenge is posed by the fact that the camp is situated in a region predominantly inhabited by ethnic Somali nationals of Kenya. Sensing the prospects of resettlement, locals seek registration as refugees. Differentiating the genuine asylum seekers from the locals is highly problematic for they are the same people, belong to the same clans and have even intermarried.

Craving for resettlement takes precedence over all else in the refugees’ daily lives. The majority see in it a gateway to some sort of paradise, the anticipation of which leads to anxiety. Almost every protection complaint ends with a request for a 'durable solution' – in other words, resettlement. Incredible and well-rehearsed tales of complaint are routinely made. To avoid the dangers of banding genuine cases with unfounded yarns, I often give the benefit of doubt to the refugees even when everything in me feels otherwise. Sometimes I have my doubts vindicated when some of the conspirators give themselves away during a later inquiry.

Cases of insecurity and conflict have intricate roots. Dealing with them requires great tact. For fear of revenge, some remain unreported. It is not uncommon for criminal transgressions within the camps to be resolved by the traditional maslaha system presided over by elders. In most criminal matters maslaha, with its emphasis on community rather than individual culpability, does not serve the cause of justice.

Women and children - especially the girl-child - suffer from negative customary and traditional values and practices. Male domination is manifested in cases of forced marriages, girls prevented from going to school and women excluded from community decision-making structures such as the maslaha courts. It is often the case that husbands sell part of the ration given to the family in order to purchase the recreational drug miraa (khat).

While female genital mutilation (FGM) is not reported by many refugees as being an issue of concern, the few isolated cases that come up are significant. Mostly a parent or parents protest against their child suffering the procedure and thus pit themselves against the rest of the community. The few reported cases are probably but the tip of the iceberg. The Somali community is a closed one as far as religion and customs are concerned and camp life only makes people more insular. While the National Council of Churches of Kenya, the CARE Refugee Assistance Programme, the UNHCR Community Services unit and the Legal Consultant try to stress the dangers of the practice and to initiate programmes to give FGM practitioners alternatives means of earning income, it is clear that much remains to be done. The protection challenge has to face the reality that FGM is a communally accepted practice. Efforts to provide special protection to the few who have chosen to dissent need to be handled in such a manner as not to create uproar and discord within the wider community.

UNHCR and implementation partners are making major efforts at affirmative action. At all levels some form of gender representation is in place. On many occasions ration cards are issued to women. Female income generation projects are being supported with funding from organisations such as the Ted Turner Foundation.

However, gender mainstreaming is a very distant dream. Inexcusably barbarous acts of sexual and gender violence continue to occur in Dadaab.(1) Measures to address gender disparity are perceived by men as disempowering. There have been acts of antagonism and retaliation from aggrieved men who perceive that women are getting preferential treatment. Accustomed to being regarded as the breadwinner, protector and head of the family, they feel disempowered. It is one thing to decree that structures should have female representatives/leaders and quite another for those so chosen to be effective or their efforts appreciated. Entrenched traditional values will not be modified or changed unless the people who hold the reins of community power and influence are on board.

What of the future?

There has been a surge of optimism that a government is reestablishing itself in Mogadishu but those that hold the guns are not in it. The root causes of clan conflict in Somalia have not been satisfactorily addressed. Some refugees may return but as long as repatriation is dependent on the voluntary will of the refugee, it is highly unlikely there will be a mass return from Dadaab.

Most of those in the Dadaab camps have been fully dependent for a decade. Some move, interact and trade, albeit illegally, with brethren in Somalia and use their refugee status as a safety net with which to gain provisions. A class of refugees has emerged with well-entrenched commercial operations within the camps, with the local community and across the Kenyan border – usually without the consent, or knowledge, of the Kenyan authorities or UNHCR. Adept at political machination, they have the means to destabilise camp life and post-repatriation settlement initiatives. They represent a security challenge.

For others, prolonged dependency is leading to lethargy. The many youngsters that have been born and schooled in Kenya may not want to go to the unknown - and their parents may be wary of taking them to a country where the prospect of stability seems like a mirage. Part of the protection challenge is to develop strategies to deal with the lassitude.

Developments within the UN and prevailing international politics will inevitably affect Dadaab. Since the bungled peacekeeping mission to Somalia in 1993, the world community has become increasingly indifferent to the Horn of Africa generally and Somalia in particular. With the UN strapped for resources and the US failing to pay its dues, resources are likely to dwindle further. Somali refugees in the Dadaab camps will remain forgotten.

For me, Dadaab has been a great but tough experience, a training period where theory and practice have met. For the refugees, living in a camp is itself of concern - but even worse are the conditions of the site in an arid region where most economic activity is not viable and the infrastructure shambolic. Of course it is true that provisions of food, education and health for the refugees qualitatively surpass those enjoyed by many Kenyans living nearby. The difference, however, is that the refugee community is almost wholly dependent on alms. The reality of life in Dadaab constantly reminds refugees that they are victims tugging at the end of a lifeline.

Jelvas Musau, an Advocate of the High Court of Kenya, works for the UNHCR Dadaab Sub Office. This article reflects his experience as Field Assistant (Protection), May-December 2000. Email: musau@unhcr.ch

Médecins Sans Frontières has recently drawn attention to looming food shortages in Dadaab unless donors strengthen the food pipeline provided by the World Food Programme. MSF nutritional data indicate that over the past six months food distribution to the camp population has diminished by 35%, resulting in a 172% increase in malnutrition among children under five. Traditional donors such as the EU, Japan and the UK have not pledged further assistance to this increasingly ignored ‘old case-load’. See www.msf.org 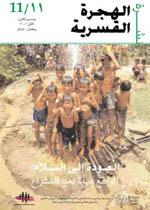