The breakdown of cultures in refugee camps

Viewed as both a way of preserving customs and of passing down tradition and values, interaction between older and younger generations is a vital component of life in Africa. In Angola, traditions which are most commonly handed down range from marriage ceremonies to the worship of gods to circumcision.

For many Angolan refugees, however, this is fast disappearing. The prolonged conflict in Angola and the consequent forced migration of millions have drastically reduced the level of interaction between older and younger people. The setting up of community schools, for example, has lessened the role played by the older members of society in the lives of the youth, as they are no longer perceived as the bearers of wisdom and advice. As in many other parts of the world, they are also often seen as old-fashioned and outdated, their views and principles conflicting with those being taught at school.

In addition, members of all ethnic groups are placed together in refugee camps. Mayukwayukwa camp in Zambia, for example, sees Mbundas, Kaluchazis and Lubales (to name but a few) living side by side. As youngsters from all groups mix together, it is virtually impossible for the older members of these various ethnic groups to pass on customs and values specific to them. Adding to these difficulties is the length of time refugees have spent in other countries; ; they begin to adopt the views and opinions of the people around them which contradict those of new arrivals from Angola.

Changes to customary practices include the following.

Marriage. Food and gifts often make up the dowry for brides in Angola. Due to harsh economic conditions, however, large sums of cash are often demanded by refugees before agreeing to marry. Whereas young girls would often live with their fiancés until they were old enough to get married, today shortages in food rations make this impossible.

Hunting, fishing and farming. Livelihoods which families practised in Angola cannot be followed by refugees in Zambia due to lack of access to land and strict regulations preventing refugees fishing from the waters of the Zambezi River.

Nzango. This meeting place where members of the community, young and old, would eat, tell stories, discuss important matters, pass on skills and settle disputes was crucial to community life in Angola. Refugees, however, have no such place to congregate and interaction between older and younger generations is limited to the nuclear family. Skills that would have been taught to boys are no longer relevant, negating the role of older male members of the family. Thus it often becomes the duty of the women to teach both girls and boys.

Leadership. Gender roles in Angola's patriarchal society are clear but for refugees this framework is lost. As people are appointed to lead refugee communities (it is important to note here that the method of selection is highly questionable) and NGOs focus largely on empowering women, the traditional male role soon disappears and men can start to feel worthless and insignificant. The loss of this established structure in which each member of society has a certain role to play can have many repercussions for refugees returning to Angola.

Circumcision. This tradition has survived better than any other as it is practised in other African countries, including Zambia. Nevertheless, there are differences in the way in which it is carried out. The minimum age in Angola is 12 whereas boys as young as 6 are circumcised in Zambia. As circumcision is perceived by Angolans as a boy's passage into manhood, they believe he should be at the age of puberty when it is done.

Worshipping gods. Refugees have largely been converted to Christianity, eradicating their former belief in and worship of various gods, such as the gods of rain and fortune.

Although Angolan customs and traditions amongst refugees have changed significantly or have been lost altogether, many young refugees appreciate and value their importance in understanding their roots and making them who they are. As one young woman from Mayukwyukwa camp says, "The past is always the key to the future". These youngsters are keen to regain what is lost and pass it on to future generations. For as long as the above factors apply, however, this would appear to be highly unlikely. 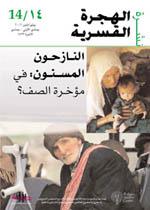