The term ‘internally displaced persons’ has become prominent in the humanitarian community. Debate about terminology has been heightened by the recent assertion of the US Ambassador to the UN, that the term ‘IDP’ is “odious terminology” and that the only distinctions between refugees and IDPs are bureaucratic and legal.(1)

The assumption that refugees and IDPs are the same is commonplace. At the height of the Chechnya conflict, the BBC repeatedly described the Chechens fleeing Grozny to Ingushetia as 'refugees’. For the general public these were people who had been forced to leave their homes; the fact that they had not crossed an internationally-recognized border was irrelevant. It could be argued that it is not important for the wider public to appreciate the legal and bureaucratic distinctions. It is essential, however, to those concerned with the protection of the internally displaced. An appreciation of the differences and similarities between refugees and IDPs is necessary to understand the limits on protection of the internally displaced. Comparing the two regimes also provides lessons that may better enable us to protect IDPs.

Within IDP circles there is still disagreement on who is and who is not an IDP. K C Saha’s article casts doubt on the prospect of achieving international consensus on who they are and how they should be helped, largely because of possible objections by states. While his conclusion may be pessimistic, his suggestion that the Guiding Principles be made more precise deserves examination.

Better use of terminology is not the only reason for greater precision. The Guiding Principles have, in the space of a few years, acquired a moral authority perhaps beyond the aspirations of its drafters. If the momentum is to be kept up and if the Principles are to be used to monitor treatment of IDPs, then states, non-state actors and international organizations may eventually need to be held accountable to a more concrete 'definition' of IDPs. The refugee protection regime in this regard can be instructive. Beyond existing examples where refugee law by analogy has been incorporated into the Principles - such as the internally displaced's protection equivalent of non-refoulement - examining some aspects of the refugee protection regime provides important examples why legal and bureaucratic distinctions are critical.

At the heart of the distinction between refugees and IDPs displaced is status. The Principles describe IDPs as those “forced or obliged to flee or to leave their homes or places of habitual residence, in particular as a result of, or in order to avoid the effects of armed conflict, situations of generalized violence, violations of human rights or natural or human-made disasters, and who have not crossed an internationally recognized State border”. Refugees are first defined by the 1951 Convention relating to the Status of Refugees as those who as a result of “a well-founded fear of being persecuted for reasons of race, religion, nationality, membership of a particular social group, or political opinion is outside the country of his nationality and is unable or, owing to such fear is unwilling, to avail himself of the protection of that country.” Individuals recognized as refugees are entitled to certain favourable treatment - by countries that are signatory to the Convention - such as access to education and the legal system and the right not to be expelled across a border to a place where his/her life may be threatened (non-refoulement).

Even though the team of international legal experts who prepared the Principles studiously avoided the use of the term ‘definition’, there is frequent ill-informed mention of the so-called ’IDP definition’. More accurate is Walter Kalin’s recent assertion that what the Principles give us is "a descriptive identification of the category of persons whose needs are the concern of the Guiding Principles".(2)

The differences between a ‘definition’ and a ‘description’ and between a refugee and an IDP are an example where differences in language are critical to any form of protection. The requirements to become a refugee according to the 1951 Convention are precise and limited: there has to be a "well-founded fear of persecution" and this fear must be linked to one of the grounds enumerated. Even the broader definition in the 1969 OAU Convention attempts to be as precise as possible. This is not the case with the Principles which deliberately use the phrase "in particular" so as to include other possible reasons for displacement that were not included in the description. It intentionally steers toward flexibility rather than legal precision.

Refugee status entitles individuals to certain rights and international protection. A refugee as a foreigner in another country is entitled to certain rights as a substitute for the protection s/he cannot claim from his/her own country. By contrast, an IDP may not claim any additional rights to those shared with his/her compatriots. The current purpose of identifying the internally displaced in the Principles is thus not to provide legal status but rather to recognise that they are vulnerable due to the fact they have been forced from their homes - often by the very government supposed to protect them - and that extra efforts should be made to ensure they are treated according to applicable human rights law and humanitarian law.

In light of the differences between the definition used for refugee and the description used for IDPs, the common accusation(3) that advocates of increased protection for IDPs are demanding an extension of the refugee protection regime is shown to be groundless. What in fact they are seeking is a higher quality of protection through an improvement in the application of existing human rights law and humanitarian law.

The Guiding Principles are beginning to acquire a significant level of international authority. One reason for this is that, while the Principles do not imply additional rights, they do provide a possible means for holding states and international organizations accountable for their treatment of individuals judged by the world to be internally displaced. K C Saha's example of the Kashmiri Pandits demonstrates that while the Kashmiri Pandits, like those internally displaced elsewhere, do not have any more rights than other citizens, their hopes of drawing greater attention to their plight would be closer to being realized if they could be recognized as IDPs.

Evolution of the Principles

As the Principles reach a wider audience, some advocates of the IDP protection regime are looking again at the dilemmas of definition versus description and precision versus flexibility. The kind of open surgery and major alterations to obtain greater precision from the Principles as suggested by K C Saha would be counterproductive and regrettable. In particular the prevention section that Saha suggests removing is one area where the broad character of the Principles has to be applauded. The inclusion of large-scale development projects in Principle 6 responds to real concerns expressed earlier this year during a conference on the Guiding Principles held in Bangkok. Participants noted how misconceived or badly implemented development projects contribute to, or exacerbate, existing conflicts and how land expropriation may be used as another tool for ethnic discrimination.

Another route to increasing precision is in the so-called 'description’. As recognition of the Guiding Principles leads to expectations of improved protection, deciding who is internally displaced becomes a matter of hotly contested debate - as K C Saha's case study demonstrates. Equally, as the Guiding Principles become a useful tool for monitoring state behaviour and ultimately for holding both states and the general international community more accountable, the need to describe IDPs more definitively could be advantageous. This is a challenge now faced by the Global IDP Project. A precise definition can be vital to monitoring and accountability for it is impossible to effectively monitor a category if everybody has different conceptions of who is to be included. It is also theoretically easier to maintain accountability if the identity of the internally displaced is clear.

What may be of benefit at a later and more mature stage in the evolution of the Principles is greater precision, operational clarity and predictability in determining who is internally displaced. The challenge will be how to make the description - or definition - more precise, predictable and clear, while not excluding potential vulnerable groups and not sacrificing the gains that have been made.

Once again the refugee protection regime may provide some guidance. The 1951 Convention provides an illustration of the use of a precise definition aimed at holding states accountable for their treatment of refugees. Many claim that the 1951 Convention is too rigid, hence the necessity for broadening the definition under the OAU Convention and the Cartegena Declaration. As we approach the 50th anniversary of the 1951 Convention, IDP advocates will be closely watching the debate to see what pointers emerge to clarify the dilemmas of definition versus description and precision versus flexibility.

Marc Vincent is the Coordinator of the Global IDP Project (www.idpproject.org). Email: marc.vincent@nrc.ch

For a wide-ranging discussion of recent developments in the IDP debate see the latest issue (vol. 21 no 6) of Refugee Reports (US Committee for Refugees, www.refugees.org). 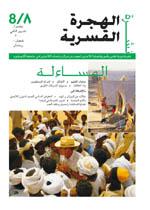