Recognition of women as agricultural producers, including their role in the conservation of genetic diversity, is crucial for understanding the impact of disasters and disaster-induced displacement on the agricultural sector, for accurately assessing losses and hence for effective relief and rehabilitation programmes.

When Hurricane Mitch struck Central America in October 1998, it took the lives of nearly 10,000 people and left over 11,000 missing. It was a ‘super disaster’ causing severe and structural damage to homes, buildings, water and sanitation infrastructure, schools, clinics, hospitals, bridges and roads. The vast majority of those affected in the region, an estimated total of 6.5 million people, lost almost everything they possessed.

Missions representing almost every international humanitarian agency were sent to the region, particularly to the most devastated countries of Honduras and Nicaragua, to assess the damage and identify humanitarian needs. The FAO/WFP Special Report for Honduras(1) estimated that one-third of cereal and bean crops (considered the ‘major food crops’ in the country), had been lost and identified major losses in cash crops such as coffee, sugarcane and melons. Such assessments directly inform the programmes for agricultural relief and rehabilitation of the two lead UN food agencies and, by extension, those of national governments with which they closely cooperate. Eleven project proposals for a total amount of over US$8.5 million were prepared by FAO to support primarily the rehabilitation of basic grain production and the restoration of dairy livestock production in Honduras. Yet, while such efforts undoubtedly helped thousands of small farmers to recover their livelihoods, the response was only partial. Hurricane Mitch destroyed up to 50 per cent of all agricultural land and the destruction was indiscriminate. Flood waters swept away almost everything in its path, including all those food crops which form an intrinsic part of the complex farming systems that characterize rural livelihoods in the region.

Throughout Central America, communal plots and home gardens cultivate legumes, tubers, vegetables, fruits and herbs in combinations that vary by country or locality. The FAO/WFP Special Report had reported on losses in cattle but had not considered other livestock crucial to rural livelihoods, such as chickens, pigs, goats and other small animals. Why were losses in these crops and livestock not calculated as part of the assessment? Is it a coincidence that these forms of agricultural and livestock production are largely the responsibility of women? These questions are relevant for most disaster scenarios and for humanitarian and rehabilitation practices generally. Agricultural relief and rehabilitation policies are often guided by the assumption that humanity depends on a handful of commodity crops, most of which are defined as ‘main’ cereal and cash crops. Coincidentally, these are often associated with commercial farming, where production and income are often controlled by male farmers although women contribute their labour.

Most livelihoods of the poor are based on multiple activities and sources of food, income and security. Home gardens, communal plots, pastures, agro-forestry and cash crop production are some of the common features of small-scale, semi-subsistence agriculture which include the collection and cultivation of the roughly 3,000 wild and domesticated plant species regularly exploited for consumption and sale.(2) More specifically, about 30 crops actually ‘feed the world’, providing 95 per cent of people’s dietary energy (calories) or protein.(3) Although women market their surplus to generate additional family income, their farming system is commonly defined as subsistence because it prioritizes production for family consumption, providing the food which is crucial for the nutritional well-being and health of rural families.

In many regions, including Central America, women are also responsible for the management and reproduction of small livestock. Chickens and pigs are a common sight in most rural homes, and may be reared for home consumption or for sale, or may be used as ‘insurance’ against times of stress, including disasters.

Wars and natural disasters, and subsequent displacement, are indiscriminate in their impact on rural livelihoods. Yet few, if any, calculations are made of losses in the host of ‘female’ crops. There is therefore little understanding of the impact such losses have on livelihoods, on income and food security. Agricultural recovery from disasters is a responsibility that women are left to shoulder largely on their own. Just how they are able to manage to restore their losses, over what period of time and at what cost, remain questions requiring research.

For 30 years the world has known that women play a critical and central role in world food production. In 1970, feminist economist Ester Boserup conducted a pioneering study that presented the first comprehensive, empirically based analysis of women's participation in agriculture in many parts of Africa, Asia and Latin America.(4) Boserup unveiled to the world the extent of women's labour in agriculture and, in the process, deconstructed the widespread notion that farmers worldwide were men.

Three decades of research have largely supported Boserup's findings. FAO now estimates that, on average, women produce between 60 and 80 per cent of the food in the developing world, making up 51 per cent of the agricultural labour force worldwide and 63 per cent in developing countries. Yet, in spite of pioneering studies, available research and global statistics, humanitarian and rehabilitation programmes continue to favour men in their allocation of agricultural resources. The example of Hurricane Mitch reveals that women still find it more difficult than men to gain access to valuable resources such as land, credit and agricultural inputs, technology, training and services that would help them recover from disasters or enhance their production capacity.

The last few years have seen some positive changes with programmes paying greater attention to female farming systems. FAO's proposed emergency intervention (2000 to 2002) for internally displaced families in Colombia targets women for horticultural projects, primarily for the cultivation of vegetables and fruits, and the rearing of small animals such as chickens and pigs.(5) Such programmes are a welcome change indeed. Other agencies (particularly NGOs) are also introducing gender-sensitive agricultural projects, yet these remain marginal efforts in the greater scale of humanitarian and rehabilitation practice. In FAO’s proposed programme for Colombia, roughly US$170,000 will be invested in seeds and animals for the women's projects, while over US$1,000,000 is directed at seed inputs for maize and bean production alone.(6)

One critical element of female farming systems that requires research and analysis within the context of disasters and disaster-induced displacement relates to their role in the conservation and management of plant genetic resources. The vast majority of the available literature on women and plant biodiversity is found within ‘development’ discourse and the link with emergencies and displacement is still at a preliminary stage.

A key concern is loss of diversity of agricultural crops. Although the causes of genetic erosion are multiple, with the spread of commercial agriculture being the principal cause, studies are also beginning to assess the impact of disasters on genetic resources, including the potential loss of local crop variety, their resilience to crisis and how strengthening this can reduce the negative impact of disasters. Natural disasters in particular can have a devastating effect as flood waters, hurricanes, mudslides and volcanic eruptions wash away or bury gene banks. Farmer gene banks may also be lost as a result of displacement, especially when long in duration. The war in Zimbabwe during the 1970s disrupted local patterns of seed distribution and caused a substantial depletion of seed stocks and varieties, as farmers lost access and control over their crop varieties as a result of curfews or forced displacement into ‘protected villages’. Restrictions on their movement meant that they were unable to guard their crops against pests and raids, and could not save their granaries and seed stocks during relocation.(7) More recently, displacements caused by intense conflict in the Uraba region of Colombia is eroding the rich biodiversity once found in communities along the Riosucio river. One study found losses in 48 varieties of rice, 17 of maize, 16 of beans and 15 of yucca (cassava).(8)

Among the richest remaining repositories of genetic diversity are home gardens. Over generations, women have been collecting, preserving and experimenting with indigenous seeds from staple and secondary crops, as well as with local wild plants that may have nutritional or medicinal value. One study in Thailand found a total of 230 different plant species growing in the gardens of one village alone, with individual garden diversity ranging from 15 to 60.(9) In Sub-Saharan Africa, women have been found to cultivate as many as 120 different plants alongside men's cash crops, while in the Andean countries of Bolivia, Colombia and Peru, women develop and maintain the seed banks on which food production depends.(10)

Women manage the selection of wild genetic resources for home planting, of seeds for conservation into the next planting season, and of plant mixtures for inter-cropping in fields and gardens. These are sophisticated processes requiring extensive and detailed knowledge of genetic characteristics and traits. Continual in situ research and experimentation make possible the conservation, use and further development of local genetic diversity. Not surprisingly, home gardens are often referred to as ‘informal experimental stations’, providing a home to a large pool of biodiversity. FAO notes that in Southeast Asia, the Pacific and Latin America women's home gardens represent "some of the most complex agricultural systems".

It is now recognised that the maintenance of genetic diversity is essential for local farming systems and the long-term sustainability of agricultural production in complex and changing environments. Knowledge of farming seed systems, including crop varieties, genetic resources, seed management and livelihood strategies under normal and stress conditions is necessary to determine needs as well as effective forms of assistance.

The recent episode of Hurricane Mitch in Honduras reminds us that there is continued need to make women visible in spite of three decades of gender research and analysis. Disasters and disaster-induced displacement can have an devastating effect on agricultural production, on family health and on global genetic resources. Recognition of the role of women in these areas is crucial for understanding the impact of disasters and displacement on the agricultural sector, for accurately assessing losses and, hence, for effective relief and rehabilitation programmes

Monica Trujillo is currently an independent researcher and consultant, specializing in humanitarian and social-gender concerns. Over the past 12 years she has worked in international cooperation and, more specifically, on humanitarian programmes in South Asia and Latin America. She is co-author of the Oxfam publication Risk-Mapping and Local Capacities: Lessons from Mexico and Central America (published 2000). Email: mptrujillo@yahoo.com 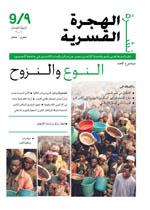