There are no official statistics, but there may be more than 40,000 Iraqi refugees in Lebanon. Lebanon already hosts some 400,000 Palestinians for whom no durable solution is in sight. In the absence of a policy response, there is a danger of the Iraqi refugees becoming ‘Palestinised’ – left in limbo in the Levant?

Most Iraqis have entered Lebanon via Syria. They include large numbers of Iraqi Christians who believe they will find safety among Lebanon’s Christian communities. Iraqi refugees find it next to impossible to obtain an entry visa to Lebanon so have entered the country illegally, often assisted by smugglers. They are thus at threat of arrest and conviction for ‘illegal entry’, regardless of their status with UNHCR. Lebanon is not a signatory to the 1951 Refugee Convention and lacks effective legislation regulating asylum. Lebanon has also repeatedly stated that it is not a country of asylum due to its demographic and social composition and to the fact that it already hosts more than 400,000 Palestinian refugees. To make matters worse, the Arab World – unlike Latin America and Africa – lacks regional instruments to provide protection for refugees fleeing from generalised violence and civil strife.

As a result, protection of refugees lies entirely in the hand of UNHCR. In March 2003 the agency called for all Iraqi refugees (including rejected cases) to be included under ‘temporary protection’ – a regime elaborated by the international community in order to respond to situations of large-scale displacement and to the limitations of the 1951 Refugee Convention and the refugee definition. It is based around four principles: admission to safety, respect for basic human rights, protection against refoulement and safe return to the country of origin when conditions permit. The rationale of the temporary protection regime is to avoid the overwhelming of refugee status procedures and to maintain the possibility of return once there is a political settlement of the conflict in the country of origin. It is premised on the belief that the conflict which has caused the mass displacement is soon to be resolved and it focuses on return as the most appropriate solution.[1]

The implementation of the temporary protection regime for Iraqis was based on the belief that the US-led invasion would overthrow Saddam Hussein’s regime and speedily restore stability and democracy to Iraq. As a result, Iraqis were left in a state of limbo and legal uncertainty: neither refugees nor non-refugees, faced with voluntary repatriation as the only possible durable solution and denied the chance of settlement in the country of asylum or in a third country. Temporary protection as conceived by UNHCR is not limited in time, in contrast to the European Union which sets a three-year limit for the implementation of this procedure. The absence of a time-frame increases the uncertainty of this temporary status and risks politicisation of the protection of massively displaced persons. As a result, the temporary protection regime of Iraqi refugees that was initially planned for a period of three months was maintained until the end of 2006.

During the UNHCR Pre-Excom NGOs Consultation Meeting in October 2006, Frontiers Ruwad Association participated in the drafting of an NGO Statement which expressed concern for the indefinite use of temporary protection and called for the recognition of Iraqi refugees on a prima facie basis in order to end the state of limbo and ensure an effective protection for Iraqi refugees in the Middle East. In December 2006, UNHCR issued an advisory return for Iraqis[2] in which it recommended that states and UNHCR should declare Iraqis as refugees on a prima facie basis except for those who were residing in Iraqi Kurdistan and those who fall under the exclusions clauses of the 1951 Convention.

Like the temporary protection regime, prima facie refugee status determination is based on the idea that a group of people – who share common criteria such as country of origin or date of flight – should be provided with international protection. However, group determination on a prima facie basis grants refugee status to all members of the group. Therefore, a refugee recognised on a prima facie basis should benefit from the rights enshrined in the 1951 Convention unlike a refugee under temporary protection.

The news of prima facie implementation came as a long-awaited Christmas present for Iraqi refugees. UNHCR offices in Beirut – and in Damascus and Amman – were flooded with refugees asking to receive the refugee certificate which they believed would protect them from arrest in Lebanon and would be their ticket to travel to another country as part  of resettlement programmes – the only durable solution for refugees in Lebanon. Around 1,800 Iraqis registered with UNHCR between January and May 2007, 50% more than for the whole of 2006. UNHCR’s target by December 2007 is to assist and/or register around 10,000 Iraqis.

The Iraqis’ illusions were soon dashed as it became clear that third-country resettlement would not be available. Few Iraqis can hope to be resettled. The US has announced plans to resettle only 7,000 of the approximately two million Iraqi refugees in the region and the European Union has declared opposition to resettlement of refugees in the EU – but has agreed to donate up to 11 million Euros for humanitarian aid in the region.

Disillusionment set in after Iraqis realised that their prima facie refugee status has not changed government policies regarding their presence in the country. The temporary protection regime and the recognition on prima facie basis were not formally acknowledged by the Lebanese authorities although Lebanon is a member of the UNHCR Executive Committee and is supposed to be bound by its conclusions. As they were under the Saddam regime, Iraqi refugees continue to be treated as illegal migrants by the Lebanese authorities, at constant risk of being arrested for illegal entry and stay in Lebanon and sentenced to imprisonment and deportation.

The Lebanese government has often ignored UNHCR protection guidelines regarding Iraqi refugees and injunctions again non-refoulement and non-repatriation. Before 2003, hundreds of Iraqi asylum seekers and at time even recognised refugees were deported back to Iraq. After 2003, voluntary repatriation convoys were organised with the assistance of the International Organization for Migration (IOM). Most of these returnees were arbitrarily detained for months after the expiry of their sentence. Prolonged arbitrary detention continues to be an effective coercive policy to force the Iraqi detainees to agree to repatriation. Most Iraqi detainees faced with the choice of remaining indefinitely in Lebanese prisons or returning to Iraq chose to return to Iraq with the intention of re-entering Lebanon illegally. Returns to Iraq from the Lebanese detention centres are financed and coordinated by the Iraqi Embassy in Lebanon and IOM. UNHCR’s role is limited to ensuring the repatriations are ‘voluntary’. An interview with the Iraqi Ambassador to Lebanon in February leads us to estimate that around 40 to 60 persons are returned to Iraq each week.

The illegal status of the Iraqi refugees denies them any form of protection. As they have no adequate assistance, they are forced to work illegally and can readily be exploited – forced to work long hours, denied social security and if their wages are not paid have no recourse to law out of fear of being arrested for lack of papers. Access to education and health care are extremely limited. Many Iraqi teenagers are forced to abandon their studies in order to work illegally in harsh conditions to provide for their families.

There are a few NGOs trying to cover the basic health needs of the most vulnerable Iraqis but their ability to assist is limited: “My wife had complications when she gave birth to our son but we were sent to a hospital that didn’t have an intensive care unit. I had to take her to another hospital but I didn’t have enough money to pay for it and there were no ambulances to transport her and the baby and give them oxygen. I had to go to a friend and borrow money and then transport my wife in a taxi. By the time I reached the second hospital, my new-born son had died in the taxi”, explained Hani. Another Iraqi woman who could not afford to deliver her child in Lebanon was smuggled to Syria where access to health care is cheaper. On her way back to Lebanon, she was arrested and detained by the Lebanese authorities along with her new-born child and an older child.

Single men are greatly neglected. As one told us: “I have not seen a doctor for the last seven years. I cannot afford to pay for a consultation. When I go to the different UNHCR implementing partners for medical assistance, they send me back and forth between them explaining either that I am not an emergency case or that I do not fall under their programme. At the end, I still have not got a medical examination.”

No protection regime – whether it is individual status determination, temporary protection or prima facie recognition – can be effective when it is solely implemented by UNHCR without the involvement of the Lebanese authorities and in the absence of any national legal framework for refugee protection which would guarantee the right of every individual to seek asylum and to be protected against forced expulsion to a country where his life would be threatened.

The magnitude of the Iraqi refugee influx in the region raises fears of ‘Palestinisation’ of their plight for the international community is focusing almost solely on humanitarian assistance, rather than the search for durable solutions. Lebanon – like other Arab states – is understandably reluctant to improve the legal status and living conditions of Iraqi refugees for fear they will once again have to carry a hosting burden which will carry on for decade after decade.

Samira Trad (samiratrad@fastmail.fm) is the director and Ghida Frangieh a trainee legal advisor at the Frontiers (Ruwad) Association (frontierscenter@cyberia.net.lb) (www.frontiersassociation.org), a Beirut-based NGO promoting the human rights of refugees and migrants in Lebanon.

[1] Note on International Protection, submitted by the UN High Commissioner for Refugees to the UN General Assembly, 7 September 1994 www.unhcr.org/excom/EXCOM/3f0a935f2.pdf 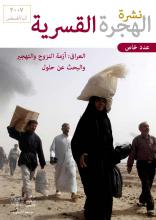