Conflict, climate change and the shrinking mobility space in the Central Sahel

The Central Sahel is one of the most conflict-affected regions in Africa, and one of the most vulnerable regions to climate risks globally.[1] It is characterised by porous borders, seasonal and international migration, communities that share border areas, and large areas and peripheries governed by non-State actors. The region has a long tradition of internal and cross-border mobility. In the Central Sahel, mobility in the form of seasonal migration and transhumance has historically been a key strategy to cope with a harsh natural environment, enabling people to diversify livelihoods and be more resilient.

Local populations have limited capacities to cope with temperature increases exceeding global averages, extreme rainfall variation, catastrophic cycles of drought and floods, and an estimated degradation of 65% of cultivatable land across the region.[2] Their livelihoods depend largely on direct access to water, pastures and other natural resources, as well as rainfed agriculture. Conflict and insecurity have further diminished local capacities to resort to traditional resilience strategies (including mobility) and have triggered large-scale displacement. This is especially visible in Burkina Faso, where the number of internally displaced persons (IDPs) has increased more than ten-fold between 2018 and 2021 to over a million, making its displacement crisis one of the fastest-growing in the world. People relying on mobility, such as IDPs, refugees, migrants in transit and transhumant pastoralists, have been directly affected or targeted by violence and attacks. The risks of kidnapping, extortion, looting and physical and sexual violence have rendered migration routes and transhumant corridors often too dangerous.

Mobility-based resilience strategies may no longer be possible for communities affected by climate risks and armed conflict. For example, conflict and militarisation of borders may limit mobility choices along transhumance routes or to traditional areas of seasonal or labour migration, and land degradation and poor natural resources management may hinder access to traditional forms of livelihoods. In these cases, mobility is no longer the cornerstone of local communities’ resilience but a reactive mechanism to preserve their short-term functioning. In the most extreme cases, forced displacement becomes the main form of mobility.

In addition, mobility-based resilience strategies depend to a significant extent on the possibility to maintain, reinforce or establish social capital bonds in hosting sites and destination areas. As such, policy narratives that reinforce securitisation, scarcity of natural resources, the stigmatisation of mobile population groups and containment of movements inevitably contribute to weakening social capital and increase tension in host communities. Social cohesion is an important part of these bonds. This explains why, whenever possible, IDPs and migrants in the Central Sahel tend to group together by community of origin. When social and inter-communal relationships break down, displaced persons and migrants will not be able to access services and opportunities in destination/hosting areas, may be forced to live in peri-urban ‘ghettos’, and tensions may emerge over natural resources, land and other assets and services. Specific groups may be discriminated or targeted. In the worst cases, mobility options may all but shrink or disappear, as inter-communal relations may deteriorate to the extent that moving would be too risky.

The policy framework in the Central Sahel has often oscillated between the promotion of mobility rights and the protection of borders and sedentary agriculture. Over the past decade the region has shifted towards stricter border management practices to curb irregular migration and securitise border regions. These tendencies create fractures that make it difficult for global commitments on climate displacement to materialise. The securitisation policies introduced, for example, hinder the application of the Freedom of Movement frameworks established under the Economic Community of West African States (ECOWAS), including their ability to provide limited forms of protection in situations of cross-border disaster displacement.

In the Central Sahel, climate and mobility frameworks are still poorly integrated and leave large numbers of displaced populations and migrants without protections beyond those afforded by human rights law. For instance, in the context of the UN Framework Convention on Climate Change, only Burkina Faso and Mali have included a discussion of mobility in their National Adaptation Programmes of Action (NAPA). In addition, although there is growing convergence between internal displacement and disaster risk reduction frameworks, there is room for this to be strengthened further. The Kampala Convention mandates States to “take measures to protect and assist persons who have been internally displaced due to natural or human made disasters, including climate change”; it also makes specific provisions for early warning mechanisms and reparations and covers situations of preventive displacement. However, the Central Sahel States are proving slow to implement their obligations after ratification, leaving protection gaps unaddressed.[3]

In general, there seems to be a disconnect between the progressive rights-based approaches emerging at the continental and regional level, especially following the 2009 African Union Resolution on Climate Change and Human Rights, and the domestic policies adopted by individual States, with the latter tending to prioritise the need to reassert State control over porous borders. These fractures make it complex for domestic policy frameworks to operationalise the emerging objectives and principles on climate-related mobility established by new instruments, such as the two Global Compacts.[4]

The Liptako-Gourma border region: from transhumance to displacement

The Liptako-Gourma triangle extends across the borders of Mali, Burkina Faso and Niger. In this region, transhumant mobility has been visibly impacted by the combined effects of conflict and climate change, and by an unfavourable policy framework. Herders’ movements are constrained by high levels of insecurity, encroachments on transhumant corridors and pastoral land, environmental degradation and a policy bias favouring sedentary communities.

As herders move longer distances to access increasingly scarce water and pastures, they come into contact with sedentary populations with which they have no past history of mediation and exchange, triggering tensions over access to natural resources. In addition, transhumant routes are also becoming more dangerous due to conflict and militarisation of borders. Security has now become the main, if not the only, criterion informing the choice of transhumant routes. Therefore, transhumant mobility – the main resilience strategy in the Central Sahel harsh environment – may no longer be viable. A report by the International Committee of the Red Cross (ICRC) showed how insecurity forced Malian pastoralists to assemble around few water points, where they had to compete with other groups for access to resources and thereby entered a spiral of vulnerability that led them to undersell their livestock and eventually end up displaced in urban areas.[5]

Pastoralist transhumance is also threatened by an unfavourable policy environment. In Burkina Faso, Mali and Niger, legal protection for pastoralists has been eroded by decentralisation processes and state fragility, triggering inter-communal tensions between mobile pastoralist and settled farmers. These tensions are generally resolved in favour of sedentary communities, as statutory laws, customary authorities and local governance structures (such as village development councils) are biased in favour of agricultural interests and tend to perceive pastoralists as outsiders.

Even when legal frameworks protect pastoralists’ access to natural resources, this is usually subject to agricultural requirements. For example, in Burkina Faso, transhumant pastoralism was regulated by Law 2009-034 and enshrined as a fundamental right for the first time in the country’s history. However, implementation challenges, the introduction of compulsory transhumance certificates and the confinement of herds’ movement to predetermined spaces have constrained the mobility of pastoralists. In Mali, the Pastoralist Charter (2001) gave priority rights to sedentary communities over pastoralists from other areas when it comes to accessing natural resources and water, making it difficult for mobile herders to sustain their livelihoods. Niger has adopted decidedly more favourable policies, protecting pastoral mobility as a fundamental right and granting pastoralists priority access to resources in home areas (Ordinance No. 2010-029, 2010 Water Code and 1993 Rural Code). However, implementation has been slow and ineffective; the Ordinance is often contravened by local authorities and private actors, and institutional capacities are weak.

In the current context, it is essential to support the ability of persons and communities to resort to mobility as a means to cope with the combined impacts of conflict and climate change. To this end, we draw the following conclusions, with recommendations.

The current disconnect within the policy framework affecting the mobility space in the Central Sahel makes it difficult for States and regional institutions to operationalise global commitments. The example of transhumant mobility shows how inconsistent policy commitments and practices can increase the vulnerabilities of mobile populations confronted with conflict and climate risks. States should take urgent measures to prevent the ongoing obstruction of existing mobility-based resilience and adaptation strategies.

As border securitisation and militarisation in the Central Sahel are increasingly shrinking the mobility space, populations that depend on cross-border mobility are exposed to protection risks and threats to their fundamental rights. It is therefore essential that States and other actors involved in border management integrate a rights-based approach and adopt more actionable practices, reflecting the realities of cross-border mobility within the region and ensuring that the mobility space is protected.

Considering the weak presence of States, especially in frontier areas, and existing challenges implementing policy objectives and global commitments, it is important for donors and implementing actors to reinforce community-based adaptation models in areas of natural resources management and traditional mechanisms governing access to natural resources and dispute resolutions.

Both authors have written in a personal capacity.

[1] For the purpose of this article, ‘Central Sahel’ encompasses Burkina Faso, Mali and Niger. These countries are all part of G5 Sahel and ECOWAS Member States.

[3] Weerasinghe S (2021) Bridging the Divide in Approaches to Conflict and Disaster Displacement: Norms, Institutions and Coordination in Afghanistan, Colombia, the Niger, the Philippines and Somalia, IOM/UNHCR www.globalprotectioncluster.org/wp-content/uploads/Bridging-the-Divide-SYNTHESIS-REPORT-with-ANNEXES-2021.pdf

[5] ICRC (2020) When Rain Turns to Dust: Understanding And Responding To The Combined Impact Of Armed Conflicts And The Climate And Environment Crisis On People’s Lives
https://shop.icrc.org/when-rain-turns-to-dust-pdf-en.html 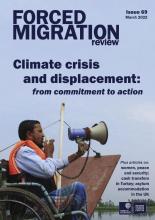