A recent study using mapping techniques to analyse vulnerability over the next 20-30 years highlights potential “hotspots” and offers insights for mitigating the effects.

Climate change appears to be taking place at a rate that outstrips many worst-case predictions. This has implications in terms of human costs that are difficult to fathom.

There is mounting evidence that climate-related disaster events are having an impact on more communities around the globe. ‘Bad development’, conflicts and poor governance weaken the resilience of communities and adversely affect their environment, making it difficult to withstand the impacts of hazards and slowing down the process of rebuilding livelihoods following a disaster. Humanitarian organisations are starting to realise that climate change does not mean ‘business as usual’. The nature and pattern of natural hazards and disasters has been changing and is very likely to continue to do so.

Global climate change is likely to affect everyone on Earth to some degree, whether in the form of social, psychological, economic or environmental change, or a combination of these.  Some people will invariably be more affected than others. Typically these will be the poorest people and the most vulnerable communities who may have little information about impending hazards and are often the least able to rebuild their lives and livelihoods after having suffered a setback.

The usual response to disasters by UN agencies, international and national NGOs and governments has traditionally been just that – to respond. Insufficient attention is given to addressing impacts of a disaster ahead of time and even less to actually doing something about it. A recent study commissioned by CARE International and the UN Office for Humanitarian Affairs (OCHA) has attempted to identify regions and communities most likely at risk of specific climate-related disasters.[1]

The intensity, frequency, duration and extent of weather-related hazards are expected to increase in many parts of the world during the next 20 to 30 years. Many of the countries and regions that currently suffer weather-related disasters should thus expect conditions to worsen in the short term.

The map below[3] shows hotspots of humanitarian risk for floods, cyclones and drought (combined) overlaying a population density gradient. Blue areas with striped overlay represent areas of high population density that are also at-at - hotspots. These areas could be interpreted to be at higher risk of future population displacement as a result of climate hazards. 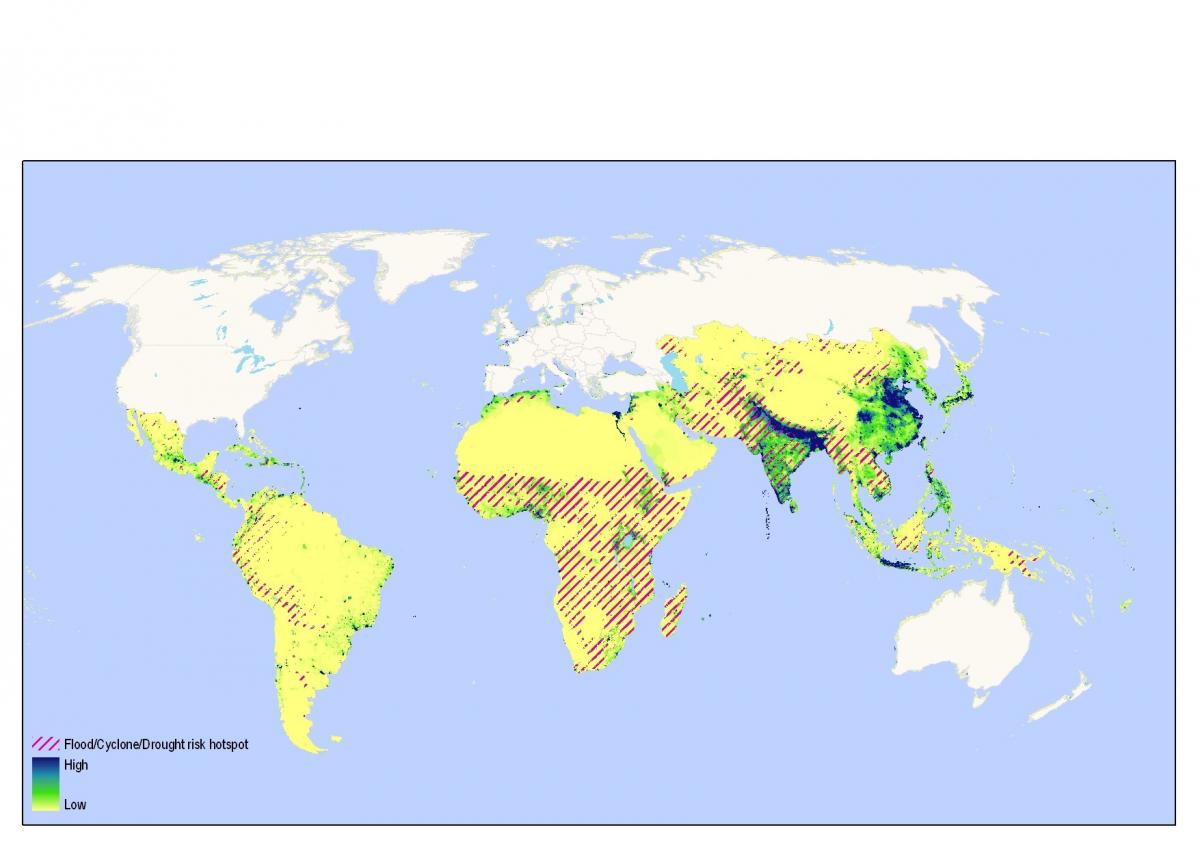 Areas at risk from more than one climate-related hazard warrant special concern. These areas include much of sub-Saharan Africa, especially the east coast, and much of South Asia. In addition, some areas are at-risk hotspots for all three of the above-mentioned hazards. These include South-east Africa and parts of South and South-east Asia.

The same approach can be used to produce maps giving a more detailed view of predicted human vulnerability, based on a number of natural, human, social, financial and physical variables. High levels of vulnerability, for example, often reflect national indicators for governance and risk of conflict while lower vulnerability can reflect greater availability of water and fertile land.  A clear message emerging from this study, however, is that high incidences of hazards need not necessarily result in similarly high levels of human vulnerability.

For more information on this study visit www.careclimatechange.org

[2] Given the complexity of climate change science and measurements of human vulnerability, the results should be interpreted as indicative only. Additional more detailed research  is required at both regional and local levels to improve reliability.

[3] This map, and others referenced in this article, were developed with support from the Policy and Development Studies Branch of OCHA. The views expressed, however, are those of the authors and do not necessarily represent the official position of the UN.