Theatre for development: a dynamic tool for change

A group of actors stands in a frozen image of a community whose members do not communicate. A man comes from the audience and moves the actors around to create an image of everyone standing in reconciliation. Then a man and a woman create an image of ‘transition’, where the actors show a willingness to communicate by sitting in a circle drinking the local brew. The actors then show the three images in succession and the audience applauds.

These images originate from training in Participatory Learning Appraisal (PLA) techniques and participatory theatre for members of seven theatre companies across Zambezia Province, Mozambique. The programme was funded by UNDP (United Nations Development Programme) and took place in November and December 1996.

Mozambique suffered a civil war between 1975 and 1992 as a result of which approximately one third of the country's population was internally displaced.(1) Today, most refugees have returned and the situation has more or less stabilised. In the fairly isolated community of Nawagene in Zambezia Province, much of the population is comprised of displaced people who, for one reason or another, have decided to remain; there is an uneasy mix between those from different areas with little mutual help shown between them.

Traditionally, the use of theatre in a development environment has involved performing plays with a strong social message with little or no audience participation or discussion. More and more, the potential of theatre as a means of discussion and of exploring pertinent issues within a particular community is being realised, particularly in a country like Mozambique where there is a strong theatrical, dance and oral tradition. Theatre for Development (TfD) is an excellent means of creating a richer picture out of the issues presented. The distance which an enactment provides allows for discussion even of sensitive issues without community members feeling personally implicated.

Theatre for Development in Nawagene

Two weeks before this training, the people of Nawagene met at the start of a participatory social survey, using PLA techniques. The women are nowhere to be seen; they are sitting under a huge mango tree where they can listen without appearing to participate. Three days later they are sitting with the men, listening to the results gathered from the three days and admitting that they had started by not giving their real names.

A discussion ensues about the problems of the area. They decide to try to create a market together: a symbol of coming together and the trust needed to construct one. The market can be seen as the community seeking to re-establish the social and economic bases of their lives after the upheaval of war. After the play, one of the men said: "Before the war there was unity and trust between us but the war destroyed that and we still have not built it up."

The concerns that most people raised in Nawagene during the social survey were to do with their lack of local services (need for clean water, more accessible health centre, etc) whereas the issues which surfaced during the theatre presentation and which were discussed and acted out were to do with social relationships and the social causes inhibiting development. Ideally, those working with the community should stay in the area throughout the process, involving the local community in all stages, including the play-making. This also ensures more effective follow-up.

There are many ideas and techniques in TfD, one of the most popular coming from the Brazilian theatre practitioner Augusto Boal and his Image and Forum methods.(2) In Image theatre, actors use their bodies to create a frozen image of a situation. This is done through modelling each other to create ever more complex, silent tableaux which can then be animated and analysed in different ways. In Forum Theatre, a play is enacted and all or part of it is replayed and the audience can intervene to change the action. One of the actors takes the part of a ‘Joker’, or facilitator, who helps to generate debate and encourage audience participation throughout the process. However, it should not be too prescriptive in the sense that the exercises should be adapted to the given situation.

Thus, in the play which took place in Nawagene, there were two key scenes offering opportunities for discussion about Nawagene's past and present. At the end, the Joker asked people to choose a scene to be repeated so that a spectator (or spectactors) could change places with a character in order to try to resolve the dilemma.

One of the theatre groups involved in the training was attached to a Dutch development agency, Zoa Refugee Care, which saw the drama experience as a tool to discover the social issues which lie beneath the surface.

This group created a play with community workers near Milange, on the border with Malawi, a country which had received more than a million refugees from Mozambique during the war. The area is now economically completely dependent on Malawi. It was particularly interesting to see how the theatre tools were adapted. Instead of one image, there was an image for each chapter of the community's history: from the war to present problems of border police stealing produce (at the end of which a man from the audience commented "the war is not over") and the short initiation ceremony for girls compared to the two-month long one of the past.

The play generated heated discussions, with one woman mentioning incest as a reason many women wanted to leave home. The drama created the forum for this taboo subject to be mentioned. Even though the subject was not pursued, it gave an opportunity for women to acknowledge it and to learn that they are not alone.

Instead of replaying the play, three spectators chose to improvise different aspects of domestic life in the past showing the mutual respect among family members which contrasted with the disharmony which was evident in the play. Afterwards, a group of women said: “But we don't want to return to the past; we just want respect, unity and patience within the home.” These were the qualities, it was agreed, which were needed within the community as a prerequisite to meeting their economic needs.

Theatre is a potent tool as a forum for discussion of problems arising out of the war. It can also determine whether traditional coping mechanisms and resources (such as initiation and burial rites) or traditional social practices (for example, mutual agricultural help or local markets) have been disrupted and to facilitate discussion as to how and whether they should be revived. As the psychiatrist Dr Patrick Bracken said in 1998: "Different societies and different cultural groups have their own ways of coping with suffering and the arrival of Western experts can have the effect of undermining ... both the position of local healers and the cultural institutions essential for communities to rebuild their way of life."(3)

Because the line between reality and fiction is perilously thin at times, theatre which deals directly with conflict should be used with caution and perhaps only when a certain period has passed. During the conflict itself care should be taken to find a unifying theme which is distanced from the community.

It is essential that the differences of experience between men and women in times of conflict and the resultant displacement be taken into account. For instance rape is often used as a weapon of war but, because of the stigma attached, the stories may remain hidden and untold even to close female relatives. It is unreasonable, therefore, to expect these stories to emerge during the theatre in development process. Eventually, the latter may create the conditions whereby they are alluded to, thus enabling women to feel that they are not alone.

Other examples of Theatre for Development

In Forum theatre, the audience needs to have the same experience as the subject of the play in order to replace the protagonist in their search for a different outcome. A play about asylum seekers which took place in Oxford in 1997 was created in two parts, the first part giving the asylum seeker's story, the second the story about a person representing ‘concerned of Oxford’. This gave the audience the chance to replace the protagonists. The ex-detainees, who helped to create the material for the first part of the play, through Boal's Image Theatre, found telling their stories “surprisingly therapeutic”(4) and as a result the theatre company continues to visit the Campsfield detention centre to play drama games to aid communication.

The RISE project (Rural people’s Institute for Social Empowerment) in Namibia used an exercise from psychodrama while working with a group experiencing internal conflicts which threatened the continuation of their garden project. The group members had to position themselves around the garden tools to symbolize their relationship with each other as well as the group as a whole. Through the discussion which followed, "hidden attitudes had been uncovered and explored. Reflection had laid the way for new action."(5) This project was supported by OXFAM, who called it Listening Theatre.

In cases where a self-monitoring procedure would be useful, the example from Milange, Mozambique, where community workers were attached to a development agency could be replicated. Another example occurred in Mali, where the development agency SOS Sahel set up a drama unit using local people as a way "to listen to the village performers and monitor the mood and views of the community. Theatre for Development provided an ongoing feedback system." (5)

In situations where there is profound distrust, fear and anger, theatre is a useful medium to bring people together to share stories and trigger emotional responses. The model of using participatory learning methods to explore a group's main concerns and then creating a play in order to debate the issues could be used in many situations. Theatre is a liberating and unifying experience as well as being fun. Follow-up is essential, however, in order to turn the community's reflection into action. 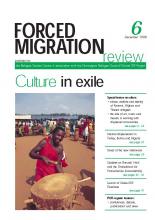