Interventions aiming to assist IDPs and refugees returning home in fragile states would do well to take note of the local political and economic contexts in the aftermath of war, because these deeply affect the reintegration of war-affected populations.

Land disputes among returning war-affected population groups endanger peace efforts in many fragile post-conflict settings. During Liberia’s 15-year civil war, around one million people fled as IDPs or refugees, abandoning their houses and land. When some of them returned to their properties in the post-conflict reconstruction phase, many found them occupied by others. This generated rising tensions, land disputes and a latent risk for outbreaks of violence.

The civil wars in Liberia ran from 1989 to 1996 and again from 1999 to 2003. Since 2003 Liberia has been the target of international efforts to build the capacity of the state and to reintegrate war-affected populations. Refugees, IDPs and ex-combatants – all of whom are perceived as groups who are disconnected from their communities of origin and therefore in need of support – face similar challenges. The interventions that aim to promote their sustainable reintegration into society are also strikingly similar. However, on the ground there might be opposing interests and even contradictory outcomes between the reintegration of ex-fighters and the reintegration of forced migrants in the context of state re-building. Therefore understanding local post-war politics is crucial to the success or failure of reintegration efforts of both ex-combatants and returnees.

Ganta city in northeastern Liberia is a main transit and commercial hub, attractive to traders and merchants, but the war altered access to and control over land and in the aftermath of war disputes have arisen between different groupings, in particular between ex-combatants and returning refugees. The dispute is exacerbated by the fact that ex-combatants and returning refugees belong to different ethnic groups, have different religions and supported rival factions during the war.

When the disarmament process began, a majority of ex-combatants opted for permanent settlement in Ganta due to their perception of enhanced security and better livelihood possibilities in the city, as well as the existing social infrastructure. They used the first instalment of the Transitional Safety Net Allowance (paid as part of disarmament, demobilisation and resettlement – DDR – programmes to provide ex-combatants with financial means during the period prior to reintegration) to reduce their dependence on former commanders and to start small informal businesses. There was an interest in taking over properties in the central parts of town because proximity to the market area and the town’s main street were considered to be of crucial importance to the success of the informal businesses.

In 2004, under repatriation and reintegration programmes for the many refugees and IDPs, thousands returned from camps inside Liberia or from neighbouring Guinea to their abandoned homes in Ganta. UNHCR has undertaken extensive community-based reintegration projects throughout the areas of IDP return in Liberia and in almost all cases refugees have also returned to the same areas. There is therefore a strong degree of cohesion between the dual processes of refugee and IDP reintegration.

Local politics and the absence of the state

When the war ended in 2003, local elders in Ganta and commanders from particular militias appointed a Mayor and re-established the City Council, thus setting up the political structure of civilian authority in Ganta. Several commanders took control over the local government apparatus as de facto power holders locally and continued as patrons and protectors for former combatants, while the international community engaged in the process of constructing functional state institutions, mostly in the capital Monrovia.

In several areas  there are overlapping roles and functions between local and national government in Liberia. One of these is the authority to lease out public land and grant ‘squatters’ rights’. It is generally agreed that the local city administration can grant such rights for land that is publicly owned. In Ganta after 2003 the Mayor and the City Council granted squatters’ rights to people settled on privately owned land. From 2003 to 2006 the central Liberian state was more or less completely absent in the locality and intervened only sporadically in local affairs. It was not until 2008 – and after direct orders from the Minister of Internal Affairs – that the Mayor had to retract and revoke all squatters’ rights granted, at least on paper. However, in spite of their squatters’ rights being revoked, the ex-combatants were still squatting in central Ganta in 2010.

In the post-war nation-building process, land disputes are one of the most significant issues threatening national peace and security in the country. In 2006 a Land Commission was established by the president with the main task of investigating the various land disputes causing continued ethnic tension. The Commission carried out consultations and public hearings across the country with the intention of giving all parties an opportunity to express their grievances and concerns. Because of its economic importance, Ganta was one of the most disputed areas.

For Ganta, the Commission’s recommendations led to the construction of new streets in order to attract or create more avenues for businesses, since most of the disputes were centred on the main street. However this did not solve the problem, nor did a late 2008 follow-up Commission. To this day a series of land disputes has yet to be resolved.

The disputes and social struggle over land in post-conflict Liberia are not only about land per se but about authority and legitimacy more generally. Returnees base their claims to land and property on pre-war ownership and a right to return to the way things ‘used to be’ prior to the war. The ex-combatant squatters ground their claims in their physical presence and de facto occupation of the land, threats of violence and moral claims to the land as a ‘reward’ for heroism and for defending it during the war. As things stand now, the return of refugees and IDPs and the reintegration of ex-combatants appear to be mutually exclusive processes. The result is a profound reshaping of social, political and economic relations between local populations and a delay in  processes of genuine reconciliation. The international community has to date sought to stabilise the Liberian state centrally in Monrovia, only timidly addressing issues of, land access and political power at the local level.

The findings above indicate a need for the international community to:

Jairo Munive jari@diis.dk is postdoctoral researcher in the Peace, Risk and Violence unit  at the Danish Institute for International Studies https://www.diis.dk/en 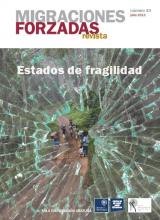