Protecting the dignity of displaced Syrians

What does dignity mean to Syrian refugees and practitioners? And what can humanitarian organisations do – or abstain from doing – to help Syrians preserve and protect their dignity?

As a Syrian with a background in humanitarian analysis, research and writing, for a long time I have been eager to write about the importance of dignity to Syrians at this particular moment in time. It has repeatedly struck me how I lose my ability to explain even the simplest thing whenever someone asks how I am or how my family back in Syria are doing. Such questions – mostly asked with the best of intentions – reawaken, yet again, the extreme humiliation felt when, within just a few weeks, months or years, you lose control over everything held dear. From the very onset of the popular uprising in Syria, dignity has played a role at both the individual and the collective level. One of the earliest and most prominent slogans during the Syrian uprising and the subsequent conflict was “The Syrian people will not be humiliated”. The notion of dignity has been repeatedly emphasised in subsequent Syrian narratives, mottos, artwork and political and social discourse. It should therefore come as no surprise how, after the outbreak of conflict and the subsequent massive forced displacement, many Syrians have expressed their dismay at experiencing humiliation not only by those who hold power in Syria but also by those who now control their lives in displacement.

Interpretations of dignity vary widely. A journalist interviewed for this research[1] explained how, for her, “dignity is simply to be treated as a human being. It means that I have rights, I have access to information without being humiliated, and my personal space is respected and not violated.” For one female doctor and aid practitioner, “Dignity is how much you reject humiliation and how strongly you react to it.”

International humanitarian organisations and their staff have rarely been systematically questioned or scrutinised as to how their behaviour and actions impact – willingly or unwillingly – on the dignity of displaced Syrians. Several Syrian female practitioners said that when Syrian refugees receive aid from international organisations they are shouted at and even cursed by the staff. They explained how men send their wives to receive aid as they assume women will accept and tolerate humiliation more. One Syrian male refugee in Lebanon observed that: “We feel like lab rats. International organisations come to us with countless needs assessments and questionnaires; they leave and we never receive assistance from them. They think we do not have anything else to do in our lives except filling in their forms and answering their questions. This is disrespectful to us. We have dignity too.”

With respect to funds distributed by non-governmental organisations (NGOs), one recipient said: “Humanitarian and development funding offered to us by international organisations is very humiliating. It seems as if we are begging for funds… literally begging.” A Syrian volunteer working in Lebanon said of the international organisations he volunteered for: “As Syrian volunteers, they pay us very little, almost nothing, to do lengthy and demanding tasks on their behalf … I need to survive in dignity too.” These experiences are examples of the imbalance in power relations that are in place between Syrian refugees and practitioners on the one hand and international humanitarian actors on the other.

The corresponding representation of refugees as helpless, desperate and passive victims is rarely addressed candidly, let alone at policy- and decision-making levels. In their publicity and fundraising materials relating to the Syrian humanitarian crisis, humanitarian organisations have – with a few notable exceptions – depicted Syrians as helpless victims. Several use images of a miserable Syrian child, usually in a refugee camp. This is, depressingly, despite years of campaigning in the 1980s and 90s to encourage more respectful use of images. When asked in informal discussions about the use of such images, some international humanitarian workers expressed their disagreement with their organisation’s policy, while others argued that humanitarian organisations’ success in raising funds arguably remains significantly dependent on portraying refugees in situations of despair and destitution and as being greatly in need of international assistance.

How we as Syrians in displacement (including those who are also humanitarian practitioners) try to preserve dignity is highly complex and antagonising. I have found myself ignored by decision makers in situations where I am there in my capacity as a consultant or expert and should be in a position of equality. One Syrian woman, a founder of a Syrian organisation for education, aid and development, expressed a similar view: “I, like all Syrians attending meetings with international humanitarian agencies, feel so humiliated. The way they look and speak to us as if we are kids, idiots or simply worthless … We nominated three candidates when we were asked by one of the UN agencies to elect a representative to represent Syrian organisations. In the end, they decided to elect a non-Syrian to represent us. This is very disrespectful to us.” In such instances, I, and others alongside me, may seek to preserve our dignity by retreating into self-imposed isolation.

These complex and challenging issues are clearly not exclusive to Syria; they are probably in some form applicable to almost every humanitarian response. However, I hope this article encourages international humanitarian actors to debate and to (re-)assess their understanding of dignity and how they conduct themselves in humanitarian responses worldwide. Syrian refugees and practitioners need to be able to engage directly and meaningfully in these debates and in making policies that affect their lives.

[1] The author is indebted to Local to Global Protection (L2GP) for supporting this research. www.local2global.info 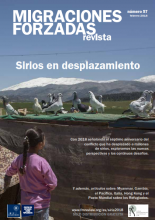