The work of community-based organisations led by and in support of lesbian, gay, bisexual, trans*, intersex and queer (LGBTIQ) refugees in Nairobi, Kenya, provides important insights into how humanitarian agencies can form effective partnerships that help to ensure access to services for all.

Refugee-led community-based organisations (CBOs) have emerged across countries of asylum to address various issues affecting refugee populations. In Nairobi, organisations led by and working on behalf of lesbian, gay, bisexual, trans*, intersex and queer (LGBTIQ)[1] refugees are proving to be resourceful and promising providers of community-based protection. Their contributions complement the broader work of humanitarian agencies and, at a time of financial uncertainty for UNHCR, the UN Refugee Agency, they are also avenues of alternative, private sector-funded assistance for refugee communities. By emphasising overall community development, these CBOs combine economic activities with pertinent legal, psychosocial and medical issues, thereby promoting the overall well-being of refugee communities and ensuring a holistic response to the question of self-reliance.

Humanitarian agencies can encourage and support CBOs’ development through external advocacy, building their capacity by developing and guiding their organisational strategies and the strengthening of financial accountability mechanisms, and cultivating networks and connections with potential partner organisations (including other refugee-led CBOs). At the same time, agencies should remain conscious of the need to encourage a broad network of CBOs that takes account of the diversity of refugee communities. Failure to pay attention to divisions that already exist between different communities could result in agencies reinforcing negative power structures, and pushing already marginalised voices further away. The nature and extent of any agency’s partnership with a refugee-led CBO must also be clearly defined. Will it, for example, involve the CBO becoming an implementing partner, or will it mean working together to achieve mutual strategic goals? Precedence, transparency and sustainability – all key to establishing and maintaining healthy relationships – must all be taken into sufficient consideration.

LGBTIQ refugee-led CBOs in Nairobi run multiple diverse programmes to address the specific needs of LGBTIQ people. These programmes include:

Community health: One CBO has harnessed the pre-existing medical skills and training of community members to provide refugee-led health training to groups of LGBTIQ clients, whose access to health services can be limited because of discrimination. Refugee community health workers subsequently lead targeted outreach to sections of the wider refugee community on various issues such as sexual health awareness (for persons at risk of or engaging in survival sex work); information about communicable diseases (for those living in communal housing); and prenatal and maternal health care (for lesbian, bisexual and queer – LBQ – women). Leaders of these programmes also identify appropriate health-care partners and establish and strengthen referral systems.

Psychosocial support: One CBO in Nairobi runs a monthly group counselling session for refugees who are living with HIV. The CBO has created partnerships with national counsellors who have experience of working with LGBTIQ individuals. These counsellors both facilitate sessions and train members of the CBO in order to promote programme sustainability. Individual counselling is also available through a referral system established between the CBO and the counsellors. Another CBO seeks to mitigate the negative effects of social isolation among LGBTIQ refugees and encourage community development through a coaching programme that cultivates their sporting and artistic skills.

Legal protection: Given that physical security is an important issue for all LGBTIQ refugees, one CBO has partnered with a local community-based paralegal organisation that offers legal assistance to refugees in the form of accompaniment to police stations, paralegal training and emergency shelter and relocation.

Crucially, these initiatives draw upon LGBTIQ refugees’ pre-existing skills and talents, sending a potent message to refugees that they are able to engage with agencies on their own terms, and take ownership of their issues. One refugee spoke of the effect: “If you build the capacity of the community to engage in these projects, they won’t worry [as much] because they are receiving services from places other than humanitarian agencies.”

One leader of a refugee-led LGBTIQ organisation suggested how agencies can better support these organisations:

“The first step is acknowledging we are here. Why doesn’t UNHCR act as a bridge between all CBOs – not only sexual orientation and gender identity [SOGI] groups but non-SOGI groups also? We expect more from agencies, in terms of support for our projects. Right now, what we want from UNHCR is not money but guidance. What we need is networks.”

The leader went on to suggest that UNHCR needs to formulate a long-term support strategy which should facilitate avenues between refugee communities and third parties – such as donor organisations – who support LGBTIQ initiatives. UNHCR’s eventual role would be one of capacity building and overall mentorship of emerging CBOs.

In response to a survey about outstanding needs, three refugee-led LGBTIQ CBOs in Nairobi noted the need to develop longer-term strategies, including succession plans to ensure continuity of leadership. They also stated a need to develop overarching financial frameworks to guide programmes, business initiatives and projects, as well as to develop financial management procedures. Other needs were identified, including for: the development of monitoring and evaluation procedures for projects (procedures that are consistent with standards applied by other professional organisations); connecting and sharing best practices with other CBOs and humanitarian agencies; and guidance on reporting and grant writing.

Including refugee-led CBOs in professional networks is key for the development of these internal capacities. By drawing on and learning from the experiences of other established organisations, refugee-led CBOs can grow, be supported and potentially emerge as partners in the provision of services to refugee communities. UNHCR should balance the positive outcomes of this development with the need to preserve refugees’ autonomy over their own initiatives. It should also consider carefully the question of financial support – particularly the potentially divisive effects of supporting some CBOs over others. The selection process for such financial support must be accessible and transparent, and take into account refugee communities’ particular vulnerabilities. CBO leaders also require non-financial support, such as training and mentorship, to develop their potential.

Some LGBTIQ refugees believe that CBOs could also act as a bridge between their own marginalised communities and the wider refugee community: “Why don’t we interact with other groups? I don’t want to stay [working with my own CBO], all about sexual orientation and gender identity (SOGI). We need to be refugees as a whole community.” In developing professional networks, the CBO leaders liaise with a broad group of non-LGBTIQ refugees, including other CBO leaders. As well as potentially providing avenues for employment of LGBTIQ refugees, there is scope for such professional networks to become forums for social dialogue, and potent tools for advancing LGBTIQ rights.

In Nairobi, many LGBTIQ CBO leadership structures are dominated by men who have sex with men (MSM). LBQ women refugees have expressed concern at not being represented in these organisations or in forums where decision making that affects their communities takes place: “If you’re not masculine, you can’t talk. Even in meetings, the boys dominate. We need to empower the lesbians.”

As CBO structures grow in influence, space for members of marginalised communities to assert themselves in decision making can decrease. Further, as CBOs increasingly become interlocutors between UNHCR and other refugees, risks arise that include the monopolisation of leadership structures, missed identification of vulnerable cases, mistrust between community members, and questions surrounding the presence and extent of agencies’ support. Refugee communities can become polarised – and politicised – by power dynamics inherent in the relations between humanitarian agencies, private sector partners and CBOs, particularly where financial support is involved. To counter this, agencies (including private sector actors) must remain aware of the potentially divisive effects of their engagement with CBOs, and seek to promote diverse refugee leadership structures, as well as remain sensitive of the intricate social dynamics of refugee communities. It must be acknowledged that MSM are proportionately greater in number than other communities (including LBQ, trans* and intersex), are empowered by a strong network of organisations working with MSM, and are generally more vocal than members from other communities.

These issues also raise more probing questions surrounding how far humanitarian agencies are willing to extend partnerships with refugee-led CBOs. The social effects of the funding of community-based initiatives by humanitarian agencies have not yet been comprehensively researched. These effects could be felt in relationships, power dynamics and risks of gender-based violence, including sexual exploitation linked to the unequal distribution of financial capital among refugee communities. Agencies should consider carefully the effects of providing financial and other support to CBOs and in particular the potential effects upon already marginalised individuals and groups. How will that support affect relationships between refugees, and between refugees and service providers? And is that support likely to increase the overall self-reliance of a community, or will it instead promote unrepresentative leadership structures, hindering the empowerment of marginalised groups?

The growth of CBOs and the increasing roles they are playing in refugee protection make greater interaction between key actors – which include the CBOs themselves – necessary. Agencies must assess how best to harness the positive efforts of CBOs, while avoiding potentially negative effects of partnership. Private sector partners and donors must remain aware of their influence, strive to understand issues and facilitate access to funding for marginalised groups. The opportunity to work more closely with refugees carries a duty of care to ensure that support does not polarise vulnerable communities, nor promote some issues over others that are equally as important.

[1] ‘Trans*’/‘trans asterisk’ is a term used to denote all transgender, non-binary and gender non-conforming identities.

[2] This article is based on ‘Disaggregating LGBTIQ protection concerns: experiences of displaced communities in Nairobi’, written for RefugePoint by the same author. 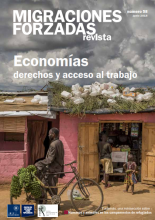