Community strategies for diversification in Ethiopia

The 2015–17 drought in the Horn of Africa displaced more than 300,000 pastoralists in the eastern part of the Somali region of Ethiopia. Many who lost their livestock have instead engaged in grassroots action to improve livelihoods recovery and to build resilience.

For the pastoral communities in the Dollo zone of Ethiopia’s Somali region, the 2015–17 drought was the worst in living memory. “We have never experienced a drought of this kind. … Around nine years ago, we suffered one, but it was not as severe as this one because we kept a considerable number of animals alive. In the [2015–17] drought, two consecutive rainy seasons failed … and we lost all our animals,” explained a 40-year-old pastoralist who, since 2017, has been living with her husband and seven children in a temporary shelter at the Koracle site for internally displaced people (IDPs).[1]

Pastoralism is the main livelihood of communities in the drylands of southern Ethiopia, and  families are very vulnerable to displacement associated with climate change. As at the end of July 2019, 425,000 people were living in displacement associated with drought.[2] Nearly 94% of households in Gafow and Koracle IDP sites defined their lifestyle before displacement as nomadic pastoralism but during the latest drought, households lost up to 80% of their livestock. As a result of the repeated shocks, local authorities in Dollo zone estimate that the proportion of pastoralists in the area has decreased from around 80% to 20%.

Alongside movement of people has also come huge and early movement of livestock, as pastoralists move their animals from areas with low rainfall to areas of higher rainfall. Districts with higher rainfall levels are experiencing high grazing pressure, leading to fears of pasture and water depletion. Many pastoralists face challenges because of the high vulnerability of prevailing livelihoods, low productivity, and limited market links, diversification opportunities and social and economic services. Loss of livestock is forcing people to adapt.

Both camps in the case-study, Gafow and Koracle, were opened in January 2017, and IDPs displaced by drought are now living in protracted displacement, with scarce opportunities for self-reliance and local integration. “It is a feeling of hopelessness. You have no means of livelihood. You don’t have any other support and you are the responsible person in your family. We came with nothing,” explained a male pastoralist in Gafow. Food insecurity and lack of access to drinking water and health care are the main challenges. Displaced pastoralists live in temporary settlements in relatively underdeveloped and marginalised settings where their peri-urban host communities also experience precarious socio-economic situations – including chronic malnutrition, limited access to basic social services and economic infrastructure, poor livelihood opportunities and a diminishing natural resource base. Consecutive years of drought and profound food insecurity have severely depleted communities’ coping mechanisms and resilience at a time when they are most needed.

In the Somali region, where communities affected by displacement are highly dependent on aid, resilience building is one of the main priorities of local actors, where committees of IDPs and host community grassroots organisations are keen to develop diversified and sustainable livelihoods. During interviews, IDPs and host community representatives proposed the creation of a diversification framework to support a livelihoods resilience approach. This framework would be designed to identify gaps related to skills and economic activities, and then to support households to find individual and community-focused solutions which are appropriate to the local context. The focus would be on providing training in vocational skills and capacity building, plus start-up capital, for IDPs displaced by drought and especially for groups such as women and youth. “If we could get some initial capital, we could work in the market, build some berkas [wells] to sell water or build a small tea shop,” said a female pastoralist in Koracle. Displaced communities also suggested that small cooperative groups and savings associations should be set up to support the development of income-generation activities.

IDPs in Gafow and Koracle said that, because of the severity of the last drought, they had developed new coping strategies: “We can do two things if another drought comes. First, we can sell the animals and make money before we run out of pasture and water and, after the drought, buy animals again. Second, in small towns like Warder, there are more services and infrastructure. We can come here to the animal feeding centres during the drought,” reflected a male pastoralist.

An important debate about the option of restocking and how it fits into a livelihoods resilience strategy is currently taking place in Ethiopia. Most IDPs prefer to be locally integrated but opinion is divided as to whether having animals again would be beneficial if it meant returning them to a pastoral and semi-nomadic way of life. Some people felt the best option was that some members of the family, particularly women and children, should stay close to the peri-urban areas such as Warder to learn new skills and to have better access to water and to services such as education and health care – while the men would return to rural areas to raise livestock. “If we have livestock again, we are not taking our children out of the school,” said a male pastoralist in Koracle.

The community-based disaster risk management strategy, developed in zones such as Dollo by the government’s Disaster Risk Management Bureau together with the support of international NGOs, has proved successful. The whole community, including women, youth and elders, participate in disaster risk reduction committees. They are given an initial cash grant to discuss the current situation and produce weather forecasts for the next season based on their experience of previous droughts and as traditional pastoral communities.

The current disaster risk reduction committees comprise the host community, IDPs and local authorities as key partners in decision-making processes. The objective of this structure is to involve the population in planning processes and to generate agency and ownership in building durable solutions. Throughout this process, any grassroots responses need to include a sensitive approach to gender, age, disability and marginalisation, and should (i) integrate gender perspectives into programming, ensuring that interventions have a positive impact on enabling – in particular – women’s rights, voice and participation, and (ii) include an analysis of social exclusion (the elderly and people with disabilities) and how this arises in particular communities, to ensure that programming benefits every member of the community.

Additional committees were created in 2017 in each IDP camp; these comprised both male and female local elders, who represented IDPs in conversations with the government and NGOs.. However, in the absence of government support, many of these committees are no longer functioning.

Identifying durable solutions that emerge from and are appropriate to the communities themselves is one of the challenges facing the development of and support for durable solutions in the region and in the country. A stronger commitment to local counterparts, starting with committees of IDPs and host community grassroots organisations, would enable greater acceptance, ownership and sustainability.

[1] IDMC undertook a research programme in December 2018 to investigate internal displacement associated with slow-onset environmental change focusing on Gafow and Koracle, two of the 252 sites for IDPs displaced by drought in Ethiopia. IDMC (2018) No Matter of Choice: Displacement in a Changing Climate
https://www.internal-displacement.org/publications/no-matter-of-choice-displacement-in-a-changing-climate 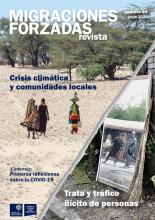