Syrian refugees’ aspirations to move contradict the notion that those refugees who are ‘stuck’ in displacement are passive victims without agency. Rather, in the absence of viable options for physical mobility, refugees may still engage in aspirations to ‘move on’ even when they are not able to do so physically.

Sustaining local, regional and transnational family networks is a strategy that displaced persons use in order to cope in conditions of protracted displacement. These networks can help provide access to humanitarian aid, socio-economic resources, psychosocial support, and opportunities for mobility. But not always. In this article, we examine the protracted displacement of Syrian refugees in Jordan as they remain restricted from onward mobility yet use family networks to dream of moving outside the country, to move next to, to be among, or to reunite with family networks ‘elsewhere’. However, these aspirations are almost always unrealised and remain idealised futures, ‘imaginaries’ of a life that is likely never to come to pass. Instead, they are practices that reinforce key family networks and assert the agency of the refugees in the context of being ‘stuck’ rather than serving as a realistic pathway to a durable solution.[1]

For the nearly one million Syrian refugees in Jordan, their stay has become increasingly protracted, with durable solutions – return in safety and dignity, local integration or third-country resettlement – remaining out of reach for nearly all. Fewer than 35,000 Syrians have returned from Jordan; Jordan continues to offer support to Syrians as ‘guests’ rather than long-term or permanent residents; and Syrian resettlement rates are very low, with only 176,000 having been resettled worldwide and only a small fraction of them coming from Jordan[2]. Our research indicates that only 16% had applied for asylum and resettlement outside Jordan.[3] Despite these odds many Syrians in Jordan continue to actively discuss their aspirations for onward mobility, despite it being extremely unlikely to become a reality.

I really want to move to Canada, or Britain, or America. They say the youth have abundant job opportunities available for them. And they have health insurance if they become sick. My sister is in America now; she has been there for four years. She says that life there is beautiful, except that being a foreigner is hard because she misses the family and her loved ones. Living there is great, especially when it comes to medical care. It’s not like the hardships and sufferings people face here in Jordan. (Syrian refugee woman in Jordan)

Mobility aspirations reveal individuals’ agency. They express desires for their own future, with a life with their family, in decent work, with educational opportunities and accessible, affordable healthcare. They articulate a vision for ‘the good life’ in which they can create a fulfilled and contented life in a country where the rule of law is the norm, rather than under an authoritarian regime. It is a future that contrasts strongly with the present, making aspiring towards such a markedly different future particularly challenging.

The United States of America, Canada, Europe (including the UK and Nordic countries) and Australia were the most popular relocation destinations chosen by those whom we interviewed. Ninety percent said that they desired to connect with and rekindle family networks outside Jordan. Comments such as this were relatively common: “We are thinking of moving, but we cannot afford it. We have no single country in mind, but we would choose Britain if we could.” Another said, “Britain is my favourite, but if I had the chance to move to another country such as Canada or Germany, I would.” These ill-defined, even interchangeable, North American and European destinations were described to us with vague and idealised images of a better life and lifestyles, with gardens and parks, better work opportunities and pay, and good educational opportunities. One woman said, “I want my kids to go back to school. I cannot afford to send them to private schools in Jordan… I wish I could move to the West to get better education for my children.” These kinds of sentiments were common among the Syrians we surveyed and interviewed.

These ideas often came from family members who were already living in these locations. Interviewees’ comments were often prefaced with “My relatives already in Britain [or whichever country] tell us…” Through social media, phone calls and family networks, family members shared a picture of a life abroad that was perhaps painted in an overly positive light and which hid some of the disadvantages and challenges. For example, one said, “My cousin is in Denmark. She does not pay house rent. The government supports them with everything.” This family member appears to have neglected to say that the Danish government has been particularly tough on Syrians, even threatening to forcibly return some.

These kinds of statements reveal little about migration intentions, but much about the transnationally embedded nature of these family networks. Such statements also reveal the ways in which refugees can and do exist in multiple places simultaneously: they reside physically in Jordan but imagine being closer to a much beloved family member, being taken care of, and receiving relief from the grinding nature of life in protracted displacement in Jordan. As one said, “I wish I could make it to Canada… My sister in Canada has got citizenship after four years, and she says that life there is different. Her kids are all in schools; they are doing very well. Here in Jordan, it seems that I am losing my sons.”

The case of Umm-Baha reveals the agent-centric nature of mobility aspirations, and the ways in which such practices reinforce family networks.

Umm-Baha is a married woman from Daraa, in southern Syria. She is in her late forties, has nine children and is a stay-at-home mother. When conflict began, she and her family considered going to Jordan, assuming they would return after two or three months. Jordan was the first choice because Umm-Baha’s husband knew the country well from frequent travel there and it was the closest option. Umm-Baha’s husband and four oldest sons began preparing for the journey to Jordan; she and the rest of the children would follow later.

Umm-Baha’s decisions about mobility were dictated by fear for her children’s safety: she was afraid to stay in Syria with them, afraid to make the journey and endanger them, and afraid to be somewhere new where she would be unable to help them as they needed. As a result, she did not want to leave Syria. However, she changed her mind when one of her daughters was sexually assaulted, and several of her sons were arrested by the Assad regime. After their release, Umm-Baha’s sons became more determined to leave for Jordan.

Initially Umm-Baha and five of her children settled near Irbid in northern Jordan, their rent paid for by the Norwegian Refugee Council. They would have liked to live closer to the city centre but the rent, water and electricity were too expensive; on the recommendations of relatives, they moved to the nearby city of Ramtha. Eight of the nine children now live in Ramtha, and Umm-Baha’s husband, parents and siblings are there, all within a five-minute walk from each other.

Despite the close presence of a large extended family in Jordan, Umm-Baha dreams regularly about a better life outside Jordan. Economic conditions in Jordan are hard, and the family must work together to make ends meet. Her sister, brother-in-law and their children were resettled in the US, and they keep in touch. This prompts her to think about possibilities for improving her own life as well. When asked if she intends to stay in Jordan, she said, “No. There is not a good life for my boys here. I am thinking of a country other than Syria with a better place for my boys.” However, any real possibilities for onward migration are thwarted because her oldest married son refuses to travel to Europe, and her grandchildren would not be eligible to go with her due to family reunification restrictions. Umm-Baha is worried that any onward migration would split the family apart.

At one point, Umm-Baha collected information from family and friends who are in the US, attempting to make her mobility aspirations a reality. They advised her to join them, and so she asked her family members in those countries to submit the paperwork for family reunification. But then, as she says, “I noticed that they apologised and deferred and said ‘it’s too long and complicated’. Our relationships have grown distant. I keep asking UNHCR about it. But they said our request in the queue.”

As the story of Umm-Baha demonstrates, mobility is not a straightforward and linear trajectory shaped merely by the presence of family. Rather, mobilities are anchored in past experiences, subject to present realities, and informed by future hopes and imagined scenarios. People’s mobilities are shaped also by which type of family network they wish to cultivate, and their perceptions of the role of knowledge sharing and trust within those family networks.

Discussions about protracted displacement, mobility and durable solutions often pay little attention to the desires, imaginations and aspirations of the refugees themselves. However, “migration imaginaries”[4] merit attention because they are widely participated in by all refugees and reveal much about ways of being and belonging, especially with regard to family networks. They also reveal the ways in which individuals become active protagonists in the context of protracted displacement, where their agency might otherwise be constrained or stifled.

Resettlement is a durable option but it is available to very few. In the absence of a viable durable option, mobility may exist in multiple places and spaces at the same time. Mobility aspirations enable the actor to contract or expand their family networks at will, without financial costs. Additional research is needed to establish to what extent mobility aspirations have positive outcomes that extend beyond the refugee or family networks in areas that may include improved mental health or physical well-being.

[1] Some of the arguments made in this article are further explored in Tobin S A, Etzold B, Momani F, Al Yakoub T A, AlMassad R F and Shdefat A G (forthcoming) ‘Ambivalent entanglements: Syrian refugees’ network relations and (im)mobilities in protracted displacement’ in Ahrens J and King R (Eds) Onward Migration and Multi-sited Transnationalism: Complex Trajectories, Practices and Ties, Cham: Springer.

[2] Resettlement at a Glance: January-December 2019 www.unhcr.org/protection/resettlement/5e31448a4/reset­tlement-fact-sheet-2019.html

[3] Tobin S A et al (2020) ‘Figurations of Displacement in Jordan and beyond: Empirical findings and reflections on protracted displacement and translocal connec­tions of Syrian refugees’, TRAFIG Working Paper No 6,BICC https://trafig.eu/output/working-papers/trafig-working-paper-no-6/D056-TWP-Figurations-of%20Displacement-in-and-beyond-Jordan-Tobin-et-al.-2021-v01p-2021-4-20.pdf 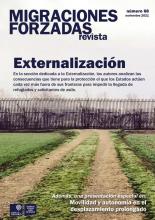