Refugee camps not really reconsidered: a reply to Crisp and Jacobsen

Jeff Crisp and Karen Jacobsen’s thoughtful response to the August issue of Forced Migration Review is helpful in setting out further the terms of the current debate on refugee camps. However, I am moved to respond briefly; for although Jeff Crisp writes in his personal capacity and Karen Jacobson has no direct connection to UNHCR, what they have written reflects quite accurately the views expressed by many UNHCR and other international agency personnel. This might be summed up in three propositions.

Argument 1: It is host governments, not international agencies, who insist on camps.

On this point, I do not disagree – indeed, much of the thrust of my own article was to stress the interest of governments in establishing camps. But far from implying that it was also international agency policy to promote camps, my aim was to highlight how, in spite of being formally opposed to camps, the actions of these agencies on the ground so often fail to defend alternatives. Part of the reason undoubtedly lies in Crisp and Jacobsen’s second argument.

Argument 2: There is insufficient evidence that self-settlement is better than camps.

Certainly it seems to me that many international agency personnel are blissfully unaware of any evidence, even though evidence does exist of 'successful’ self-settlement. For example, Art Hansen’s work in northwest Zambia and Walter Kok’s work in eastern Sudan are both explicitly comparative of camp and non-camp populations. Perhaps more research is needed, though, to provide the arguments to support the policy of avoiding camps?

In practice, though, I suspect it is not so much the lack of evidence as the way this evidence is viewed. My own work in Guinea also examines a largely successful experience of self-settlement; yet I have lost count of the number of times this example has been dismissed by agency personnel working elsewhere as 'unique’ and 'unrepresentative’, because the refugees moved into an area inhabited by their 'kinsmen’. This of course ignores the fact that most refugees in Africa move over short distances and remain within areas inhabited by related ethnic groups; and that the first waves of refugees to Guinea (who established the current settlement pattern) were far from ethnically homogenous.

Argument 3: Camps are inevitable, so research needs to focus on how to make them better.

I would not deny that research on improving conditions in camps is vital. But this is no more the “real question” than my suggestion for more research on the benefits of self- settlement. Rather, there is a need to explore real and potential outcomes for refugees and their hosts whether or not camps are established, and in specific contexts. Such research would, implicitly, challenge the assumption that refugee camps are inevitable outcomes of policy (as they appear too often to be), and provide arguments for concerned individuals and groups to challenge government or international policy where it is iniquitous. In contrast, research that limits itself to making camps work may already have conceded the most important battle. 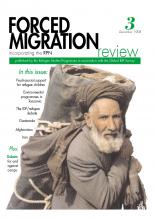