“These people are as if lost in time and space.” Still displaced after 20 years, residents of collective centres in Bosnia and Herzegovina share their frustration. They need to be listened to.

The Bosnian war ended in 1995 but many of those displaced during the war still live in a situation of protracted displacement, neither adequately protected by the state nor fully able to access the basic rights of their citizenship. As of 2014, around 8,500 internally displaced people still live in about 100 collective centres in Bosnia and Herzegovina (BiH).[1]

“If you would have asked me 15 years ago, I would not have believed that we would end up … still having such problems.”

I visited Mihatovici Collective Centre which is the largest in the country, with several hundred residents, located about 10km from the city of Tuzla and built in 1993 with Norwegian aid. Mainly displaced women and children from Srebrenica and eastern BiH reside there, by now including second- and third-generation IDPs. The second centre I visited, Hrasnica, was established in 1998 and is located outside Sarajevo in a former hotel. Since many families resettled, there are only 32 people still living there. Conversations with centre residents reflect how poverty and work are the main concerns of daily life.

“I don’t have anything. Do you know what that means? Absolutely nothing.”

“We don’t have any salaries, we don’t have any financial help. […] I am just managing as well as I can. I have some cattle. I do whatever work I can, that’s how I earn some money.”

The IDPs in BiH have been dependent on aid for up to twenty years. Humanitarian aid provided essential support for IDPs who found themselves poverty-stricken after they fled their homes. However, donors and organisations have since shifted their focus, and programmes were terminated after the end of the emergency phase. Nonetheless, many IDPs are still dependent on assistance today.

As many IDPs are elderly, some of them receive pensions. However, pensions usually do not suffice for even basic needs. This is an issue particularly for women, due to their longer life expectancy and lower number of years worked in formal employment.

The housing conditions are appalling. The buildings are old and fragile; some residents do not have heating or water; the space is inadequate for families; and other facilities such as telephones are often lacking.

“These houses that we live in, you have to come and see them. They are completely destroyed….”

Education is another major concern. Mihatovici has an elementary school, funded by NGOs and providing school materials, meals and afternoon projects for the children. A senior staff member made it clear to me that, in his view, educating children sufficiently so that they could “get out of here” was the only effective way to assist them. However, in order to go on to middle and high school, the children have to attend schools in nearby towns, and many parents are unable to pay for public transport.

In addition to the physical health problems many displaced people face (due to malnutrition, violence during the war, etc), many also suffer from mental health problems. Clearly, the violence experienced during the war and their displacement often have serious repercussions, such as depression, post-traumatic stress disorder, drug abuse and violent behaviour. I encountered alcoholism, depression, neurosis and the regular taking of sedatives. Furthermore, residents told of frequent conflicts in the centre:

“They fight a lot. They hit each other like in the Wild West.”

“As a displaced women, you're not just displaced, you carry [an] additional [burden].”

Women took responsibility for the survival of and provision for their families under the worst conditions during the war. Displaced after the war, they faced poverty and powerlessness, often left wondering about the fate of husbands or children. Many women are now the sole head of a household. During the war, women were pushed into new positions of influence and leadership, as well as income provision and decision making in the household. Several respondents confirmed these changes in gender roles and indicated that when the war ended, men took over leading positions in communities and politics again, and women were pushed back into the domestic space.

In a country where jobs are scarce in general, it is very difficult for displaced women to compete for jobs, in part due to the priority placed on the recruitment of demobilised soldiers or family members of deceased soldiers and injured veterans. I found that although a few women residents of collective centres find agricultural work, most have no such opportunities. Lack of access to land is a common problem. Also, many women displaced from rural parts of BiH are not sufficiently educated to compete in other sectors.

“There should be crafts, workshops, things like that for women. Something should be organised so that we can contribute and produce things and sell them. We need jobs. We need ways to earn money.”

Income-generating programmes (not only in BiH but globally) tend to put an emphasis on activities such as handicrafts and sewing, because they are traditionally viewed as female activities. This might mean independence for some women; however, these are often marginal economic activities. A better approach would be a more holistic one, which would support displaced women with skills training to access new markets and with opportunities such as micro-credit loans but which would also address their needs in other areas, such as psychosocial support. Catholic Relief Services, for example, provides individual help depending on the needs of a family, such as livelihood opportunities, kitchen gardens, scholarships, agricultural machinery, housing and psychological support. Meanwhile, a positive example of providing an opportunity for self-employment is BH Crafts.[2] However, more skills training projects are needed.

Many IDPs feel hopeless in the face of a government that gives the impression that it has turned its back on them. The lack of tangible success in assisting IDPs to find a solution over the past two decades has left them disillusioned and resentful, feeling ignored and forgotten:

“These people are as if lost in time and space.”

“Whenever someone comes, they visit the manager. We don’t know who came, for what reason; we are never informed about anything, and we are not really asked.”

“This is the first meeting that we have been invited to.”

Yet giving displaced people a chance to be heard and to participate in decisions affecting them is crucial for building effective support programmes and finding a sustainable solution for them. In addition, it would do more than just give them a voice. It would strengthen their sense of personal worth, and their sense of community and of belonging in their own country.

[1] In 2014, while studying for an MA in Intercultural Conflict Management I undertook qualitative research into the current challenges facing IDPs in BiH (in cooperation with CESI, the Centre for Refugee and IDP Studies in Sarajevo) and conducted 20 in-depth interviews with IDPs and local and international actors. All quotes in this article come from these interviews.

[2] BH Crafts provides women with tools and material for knitting clothes, which the company then sells. The programme is now open to all women seeking additional income but was started as a project for residents of the Mihatovici Collective Centre and many of the beneficiaries are displaced women. 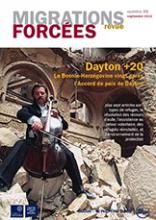