Intersection of disability and HIV/AIDS

People with disabilities, and especially women with disabilities, are largely ignored by the mainstream HIV/AIDS community even though they are at a heightened risk of contracting HIV/AIDS. All of the risk factors associated with HIV are increased for individuals with disability: poverty, severely limited access to education and health care, lack of information and resources to ensure ‘safer sex’, lack of legal protection, increased risk of violence and rape, vulnerability to substance abuse, and stigma. With little support from mainstream relief organisations, some disability groups are starting to address AIDS out of necessity, in spite of limited resources and the additional stigma it may bring.

Despite an overall decreasing national HIV prevalence rate, conflict-affected parts of Northern Uganda continue to see HIV infection rates that are significantly higher than the national average. These increased rates can be attributed to several factors all intimately connected to the 20-year conflict and IDP situation in northern districts: disruption of the cultural and social systems, leaving children without proper parental instruction; increased sexual activity due to over-crowding in camps; and rape, sexual abuse and exploitation of girls and young women.[i]

In post-conflict Northern Uganda, most major international relief organisations incorporate HIV/AIDS services into their programmes and initiatives. However, to date, none of them are implementing programmes specifically aimed at integrating people with disabilities and disability rights issues into HIV/AIDS programming. One national NGO, TASO Uganda,[ii] is working with the National Union of Persons with Disabilities to train several persons with disabilities as HIV/AIDS counsellors and trainers. The international NGOs working in conflict zones, who often have more resources and influence at their disposal, continue to lag behind in the integration of AIDS and disability issues. The high rates of both HIV/AIDS and disability within conflict and post-conflict regions demonstrate a clear need for attention to the intersection of these issues.

A small and courageous group of women with disabilities have come together to form the Gulu District Association of Women with Disabilities, supporting women with disabilities who are living with HIV/AIDS and integrating AIDS issues into the overall activities of the organisation. The women, who are themselves HIV-positive, have spoken out publicly about their status and encouraged other women with disabilities to do the same. Many in their group have lost their jobs or livelihoods because of their HIV-related illness, and many are no longer supported by their partners because of the stigma surrounding their HIV-status and/or their disability. The group has been able to offer social support to each other and create a forum for resolving domestic disputes connected to their HIV-positive status. They are currently seeking funding to support their members in sustainable income-generating projects to assist them with their daily needs. 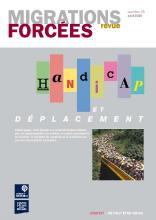