The Guiding Principles and the Responsibility to Protect

At the GP10 conference, several speakers invoked the ‘responsibility to protect’ and recommended closely linking it to the Guiding Principles and with the fate and situation of the millions of IDPs. What might making this connection bring, conceptually and concretely, to the protection of IDPs?

The Responsibility to Protect (R2P) asserts that sovereign states have a responsibility to protect their populations from genocide and other mass atrocities but that when they are unable or unwilling to do so, a responsibility of the broader community of states also comes into play. Coined in 2001, the concept of R2P emerged from the International Commission on Intervention and State Sovereignty (ICISS). This was convened to forge international consensus on humanitarian intervention after the experience of the 1990s, when intervention had proven intensely controversial, “both when it has happened – as in Somalia, Bosnia and Kosovo – and when it has failed to happen, as in Rwanda.”[1] ICISS re-framed the language and tone of debate by no longer speaking of a right of outsiders to intervene but a responsibility – in the first instance, of the state concerned – to protect its own population. R2P prescribed a broad package of measures, including not only the responsibility to react to protect populations from grievous harm but also the responsibility to prevent such situations and to rebuild in their aftermath.

Heads of state who assembled at the 2005 World Summit unanimously endorsed the concept of R2P, agreeing to its relevance to address genocide, war crimes, ethnic cleansing and crimes against humanity, and specified that: (1) each individual state has the responsibility to protect its population from these crimes; and (2) the international community, acting through the UN, has the responsibility to do so when “national authorities are manifestly failing to protect their populations” from these crimes, if necessary by taking collective action, including the use of military force.[2] UN Security Council Resolution 1674 (2006) subsequently reaffirmed this commitment and the concept of R2P.

The duty to prevent and respond to genocide, war crimes and crimes against humanity of course predates R2P by more than half a century. Even so, R2P represents a breakthrough in that it breathes new life into these long-standing commitments, in particular by buttressing accountability among states and the international community to fulfil these protection obligations in practice.

The relevance to IDPs

Situations of genocide, war crimes, crimes against humanity and ethnic cleansing inevitably force people into displacement. The link between R2P and IDPs, however, extends beyond causal factors.

In fact, the intellectual roots of R2P run deep, extending to and very much inspired by international approaches to IDP protection introduced a decade earlier. In particular, the concept of ‘sovereignty as responsibility’, which is at the core of R2P, has a pedigree traceable to the earliest days of IDP protection advocacy. A principal architect of R2P recently credited Roberta Cohen, working on IDPs with the Refugee Policy Group in 1991, as the first to spell out that “sovereignty carries with it a responsibility on the part of governments to protect their citizens.”[3] When the advocacy campaign she spearheaded succeeded with Francis Deng’s appointment in 1992 as Representative of the UN Secretary-General on Internally Displaced Persons, Deng continued in this vein, asserting in his first report:

“No Government can legitimately invoke sovereignty for the deliberate purpose of starving its population to death or otherwise denying them access to protection and resources vital to their survival and well-being. […] if a Government is incapable of providing protection and assistance then the international community should act, either on the invitation of the host country or with international consensus, to fill the vacuum.”[4]

Coining the phrase ‘sovereignty as responsibility’,[5] Deng then made this concept his signature calling card in carrying out all aspects of his mandate. He used it to particular advantage in opening channels for constructive dialogue with governments the world over on what fundamentally is an internal, and therefore politically highly sensitive, matter. Much more than a diplomatic nuance and tactic, sovereignty as responsibility also simply made sense. For IDPs and other people still within their own country, protection ultimately entails securing access to effective national protection.

The concept of sovereignty as responsibility at the core of R2P also informed and underpins the Principles. As a general principle, “national authorities have the primary duty and responsibility to provide protection and humanitarian assistance to internally displaced persons within their jurisdiction” (Principle 3). The Principles then proceed to spell out what this responsibility requires in all phases of displacement: from prevention, to protecting populations against atrocities and abuse of rights, to ensuring durable solutions – a comprehensive approach which calls to mind and could help guide implementation of R2P’s three-fold responsibility to prevent, to react and to rebuild.

At the same time the Principles make it clear that protecting IDPs is the responsibility not only of authorities in-country but also of the international community, especially when national authorities are unable or unwilling to fulfill their role. The Principles reaffirm that “all authorities and international actors shall respect and ensure respect for their obligations under international law, including human rights and humanitarian law” (Principle 5). It is incumbent upon states to accept international assistance if they are unable or unwilling to provide the assistance that IDPs require (Principle 25).  Further, international humanitarian organisations and other appropriate actors providing assistance are to “give due regard to the protection needs and human rights of IDPs and take appropriate measures in this regard” (Principle 27).

Genocide, ethnic cleansing and acts constituting war crimes and crimes against humanity – the four trigger scenarios for R2P – are all expressly prohibited in the Principles, based on obligations under international law. However, unlike R2P as endorsed by the World Summit, the protection prescribed by the Principles is by no means limited to these same circumstances. The Principles unequivocally recognise that people become IDPs due to a range of causes including armed conflict, generalised violence, violations of human rights, natural or human-made disasters, and large-scale development projects. With R2P, as the experience in the aftermath of Burma’s Cyclone Nargis made evident, there is no consensus even among the chief architects of R2P as to whether it can be applied in the case of overwhelming natural or environmental catastrophes, where the state concerned is either unwilling or unable to cope, or call for assistance, and there is or might be significant loss of life.[6] Moreover, the Principles define protection in terms not only of physical safety but also of the broad range of civil, political, economic, social and cultural rights.

A further key difference lies in their fundamental purpose. The Principles were drafted in response to a request from states, voiced in resolutions adopted by the UN General Assembly and Commission on Human Rights, for a normative framework for the protection of IDPs.  Their express purpose is to provide guidance on the rights of IDPs and the responsibilities of states and other authorities towards them. Recognised by the 2005 World Summit as the authoritative statement on the rights of IDPs, the Principles have also been incorporated into national laws and policies in numerous countries. In addition to clarifying the relevant legal norms, the Principles also specify some of the concrete actions that realisation of these norms requires, such as issuing replacement personal documentation for IDPs, incorporating women’s views and concerns into the design and delivery of assistance, making education and training facilities available in IDP camps, and helping IDPs recover or receive compensation for lost or damaged property.

Anchored in the same bodies of international humanitarian law as the Principles, R2P was developed for a different purpose: to break through a political impasse, specifically on the basic questions of principle and process as to when, how and under whose authority international intervention should occur. That R2P has gained international acceptance and traction is a testament to its contribution towards re-opening dialogue and re-affirming commitments on this critical issue.

Even so, the practical implications of R2P have yet to be developed and remain controversial. The Secretary-General’s Special Adviser on R2P points out: “UN member states are united in their support for the goals of R2P but less so on how to achieve them.”[7] UN Secretary-General Ban Ki-Moon, an active advocate of R2P, acknowledges that it is “a concept, not yet a policy; an aspiration, not yet a reality. […] There is no blueprint for getting the job done.”[8] In the absence of such a blueprint, misconceptions abound; most significantly, the mistaken impression of R2P as “nothing more than military intervention cloaked in political rhetoric remains a road block for many.”[9] As a result, a number of governments, fearing international intrusion, remain prickly about the concept. Under these circumstances, explicitly linking R2P to internal displacement and the Principles could risk confounding the latter with intervention in internal affairs and undermine the wide acceptance of the Principles that has been so carefully cultivated over the past decade.

To be sure, R2P’s proponents have worked hard to explain the broad range of measures that it encompasses, with particular emphasis on preventive measures and building state capacity. Both of these aims also find strong reflection in the Principles, which could thus provide a useful tool and guidance for implementing these aspects of R2P in cases of real or threatened internal displacement. Increasing focus by R2P advocates on prevention and the ‘softer’ measures such as diplomatic persuasion were used to address the post-election violence in Kenya – the first successful application of R2P. However, it is essential to the aim and legitimacy of the R2P concept to not shy away from confronting cases, such as Darfur, DRC, Zimbabwe and Somalia, where mass atrocities and abuses remain unchecked and a meaningful international protection response is long overdue.

Clearer understanding of R2P’s purpose and scope is key to deepening the political buy-in for its application which, in turn, will require the development of practical tools and implementation strategies (the UN Secretary-General has promised to unveil proposals for operationalising R2P before the end of 2008). Once these elements are put in place, R2P holds tremendous promise as a mobilising tool to reinforce and support realisation of those parts of the Principles concerned with the protection of IDPs from the most serious crimes. In the meantime, whether states and the international community will fulfil their responsibilities – new and old – to protect people in grave peril remains a question urgently on the mind of millions of IDPs.

Erin Mooney (erindmooney@hotmail.com) is a Senior Protection Officer with UN ProCap. From 1995-2006 she worked for successive Representatives of the Secretary-General on IDPs.

[3] Gareth Evans, The Responsibility to Protect:Ending Mass Atrocity Crimes Once and For All (Brookings, 2008), p36. http://www.brookings.edu/press/Books/2008/responsibilitytoprotect.aspx

[9] Brian Barbour and Brian Gorlick, ‘Embracing the “Responsibility to Protect”: A Repertoire of Measures Including Asylum for Potential Victims,” International Journal of Refugee Law (2008), p.536. http://ijrl.oxfordjournals.org/ 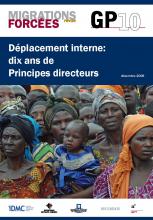