Established in the mid 1980s and funded primarily by Germany and UNHCR, BEFARe runs formal and non-formal educational (NE/NFE) activities for both the local population and Afghan refugees. It has been involved in operating over 300 schools and over a thousand non-formal education courses – funded mainly by the World Bank – for some 20,000 participants. It has developed and produced more than 100 textbooks and teachers’ guides and has an extensive teacher-training programme complemented by regular monitoring and supervision of teachers. Local communities have been mobilised to provide support via school management committees. BEFARe promotes peace, health, female education and women’s rights.

In Peshawar and the North-West Frontier Province, where over three quarters of Afghan refugees in camps/villages are to be found, the quality of the services provided has been consistently good. BEFARe has facilitated the highest primary school enrolment of refugee children in Pakistan. Figures are rarely accurate, especially not at the time of repatriation, but BEFARe estimates the enrolment rate to be 50-60% of school-age children. The percentage of girls enrolled in school peaked at 35%, yet is still impressive considering the extent of earlier resistance to girls’ education and restrictions over how it should be provided. The percentage of female teachers, however, has been lower (25%), and the percentage of female managers lower still.

NFE is a cornerstone of any early response, and also forms part of the long-term response to a refugee crisis and early reconstruction. BEFARe’s NFE programme started in 1989. Over the years, the programme has expanded in the number of learners, range of activities, and quality and quantity of teacher training courses and teaching materials. It includes a wide range of activities, such as basic literacy, civics education, mother and child health care, home schools for girls and boys, vocational and skills training, teacher training courses and community development activities for adolescents and adults. More recently, special attention has been given to psychosocial aspects, human rights, peace education, democratisation and conflict resolution. However, due to low priority by donors, by the end of 2005, the NFE Programme had been reduced to a side-activity with a small budget and vastly reduced number of learners.

BEFARe (formerly GTZ-BEFARe) is now a registered Pakistani NGO with a board of trustees.[1] It remains an implementing partner for UNHCR but has been badly affected by the agency’s recent budget cuts. In spring 2005 BEFARe was running schools for about 100,000 pupils with 2,500 teachers; by autumn, due to budget constraints, numbers had fallen to 80,000 pupils and 1,700 teachers. Further cuts in 2006 have brought down the numbers of students and teachers to 70,000 and 1,400 respectively. This clearly shows that BEFARe alone has lost an alarming number of 45,000 students over the past year. It is obviously a matter of great concern for all those involved in refugee education, and needs immediate attention of the international community. Although large numbers of refugees have repatriated – including some three million from Pakistan – Pakistan is still host to some 2.55 million Afghan refugees out of which around 1.8 million reside in NWFP. Pakistan has been a generous host, but cannot meet the needs of the large number who remain without international assistance. Assisted by UNHCR, the government plans an assessment of all refugees in late 2006 in order to decide on various durable solutions.

The Afghan refugee situation, one of the world’s largest and longest lasting, now has the dubious honour of celebrating its quarter century. BEFARe is a treasure chest for educationalists interested in refugee education. The history, achievements and lessons learned from emergency education projects are, unfortunately, rarely documented.

BEFARe’s experience has demonstrated that education is a key throughout the ‘refugee cycle’ – from exodus to refugee life to repatriation, resettlement or integration. It is vital that donors do not close down assistance for refugee education in Pakistan at this crucial point but instead continue to provide bridging assistance to returnees. While it is important to give large amounts of aid to Afghanistan, it should not be given at the expense of aid to the Afghan refugees who need to be prepared to return home in dignity, with skills, knowledge and prospects for livelihoods and further education.

Shakir Ishaq is BEFARe’s Chief Executive. Email: shakir@befare.org. Atle Hetland is an international consultant, currently based in Islamabad, with experience in refugee and development education and research. He is the author of a history of BEFARe, Learning Away from Home, published by Alhamra Publishing, Islamabad. ISBN 969-516-165-0. Email: ahetland@yahoo.com 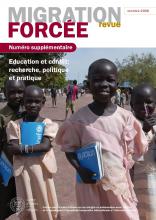