The future of the Guiding Principles on Internal Displacement

As a document originally prepared by a team of experts in close consultation with the concerned agencies and organisations and then submitted to the Human Rights Commission[1] but never negotiated by governments, the Guiding Principles are, in strict legal terms, not binding upon states. When the Principles were presented to the then UN Commission on Human Rights, governments were reluctant to do more than simply take note of them. Despite states’ reluctance to endorse them, it was always clear that the Guiding Principles have an authoritative character as they are based upon, and reflect or restate, guarantees contained in international human rights and humanitarian law that respond to the specific needs of IDPs. Thus, they draw their authority not from the process of elaboration but from the fact that their content is solidly grounded in existing international law. In fact, it is possible to cite for almost every principle a multitude of legal provisions which provided the drafters with strong normative guidance.[2] Even where language was used that was not to be found in existing treaty law, no new law in the strict sense of the word was created in most cases but existing norms were restated in more specific language.

A bottom-up process of consensus-building

How did it come about that states were able to overcome their initial reluctance to endorse the Guiding Principles? The answer to this question lies in the bottom-up process of consensus building during the past eight years.

The ultimate foundation of international law is consensus. This not only lies at the heart of treaty law but is also the hallmark of international customary law with its two constitutive elements of uniform state practice and opinio iuris – the conviction that the custom rests on a legal obligation. Consensus is also the foundation of so-called soft law, to which the Guiding Principles belong, i.e. provisions that are not binding in a strict legal sense but which, nevertheless, provide authoritative guidance on the obligations of states in a specific area.

Evidence for the acceptance of the Guiding Principles can be found at all levels of the international community. Several governments – in particular Angola, Burundi, Liberia, Uganda, Peru and Turkey – have made explicit references to the Guiding Principles in their strategies, policies or even laws on internal displacement.[3] Others are following their lead and are in the process of developing or revising their displacement-related laws and policies.

Regional intergovernmental organisations have rallied behind the Guiding Principles:

·        The Organisation of African Unity (now the African Union) has formally acknowledged the principles.

·        The Economic Community of West African States (ECOWAS) has called on its member states to disseminate and apply them.

·        A ministerial declaration of the Intergovernmental Authority on Development (IGAD) has called the principles a “useful tool” in development of national policies on internal displacement.

·        The Organisation for Security and Cooperation in Europe (OSCE) has recognised the principles as “a useful framework” in addressing internal displacement.

·        The Parliamentary Assembly of the Council of Europe has urged member states to incorporate the principles into their domestic laws, and the Committee of Ministers of the Council of Europe recently stressed its “commitment to the spirit and provisions of the UN guiding principles and its willingness to implement them in the member states’ national legislation and policy.”

At the universal level, not only some of the Special Procedures of the former UN Human Rights Commission (now the Human Rights Council) but in recent times also the treaty bodies – the expert committees monitoring the implementation of the Covenant on Civil and Political Rights or the Convention on the Rights of the Child and other UN human rights conventions – have called on states to respect the Guiding Principles.

All these developments culminated in September 2005 when heads of state assembled in New York for the World Summit unanimously adopted language according to which they “recognise the Guiding Principles on Internal Displacement as an important international framework for the protection of internally displaced persons and resolve to take effective measures to increase the protection of internally displaced persons.”[4]

Should we advocate for a binding UN treaty?

The standing of the Guiding Principles is firmly established. However, more must be done to strengthen the normative framework for the protection of the human rights of the displaced. Some have suggested that a way to do so is to enshrine the Guiding Principles in a UN treaty. I doubt that this would be the best way to proceed. Such an endeavour would only be successful if there were a worldwide consensus that the Principles should be made legally binding at the universal level. Negotiations on the 2005 World Summit Outcome document have shown that while the Guiding Principles are welcomed by all governments, many among them were not ready to explicitly recognize their legal character. The idea that internal displacement is essentially an ‘internal affair’ remains strong in many parts of the world. In this political environment it is better to continue to build consensus from the bottom up.

First and foremost, it is essential to continue, as Secretary-General Kofi Annan stressed in 2005, to promote the adoption of principles through national legislation and thus to incorporate them at the domestic level. In order  to support governments to do so, I am currently preparing a manual for national law- and policy-makers which will be largely based on good practices from throughout the world and should be published in late 2007 or early 2008.

At the regional level the time may have come to move from mere declarations to binding treaty law. Africa has taken the lead here. The draft Great Lakes Protocol on the Protection and Assistance to Internally Displaced Persons – which would establish standards for the better protection of IDPs and oblige states to incorporate the Guiding Principles into their domestic law – is ready for adoption. Similarly, the African Union is in the process of drafting a binding instrument on internal displacement which would provide a unique chance to reinforce the legal protection of IDPs in line with the Guiding Principles.

Another interesting perspective would be the elaboration of additional protocols to regional human rights conventions that would focus on incorporating those principles into the regional human rights law that are not, or only implicitly, covered by the African, Inter-American and European human rights charters and conventions. Such principles include, inter alia, Principle 1(1), stating that internally displaced persons “shall not be discriminated against in the enjoyment of any rights or freedoms on the ground that they are internally displaced”, Principle 6 on the prohibition of arbitrary displacement, Principle 7 on the modalities of (lawful) displacement, Principle 9 on the protection of indigenous peoples, minorities peasants, pastoralists and other groups with a special dependency on or attachment to their lands, Principle 12(2) on confinement in camps, Principle 16 on missing persons, Principle 15 on the right to seek safety in another part of the country or abroad and to be protected against forcible return to situations of danger, Principle 20(2) on documents, and Principles 28 on the right to freely choose between voluntary return in safety and with dignity, local integration or resettlement in another part of the country. The added value of such protocols would lie in the fact that IDPs could access the individual complaints procedures more easily and allow the regional human rights courts to develop an IDP-specific body of jurisprudence.

At the universal level, the UN special procedures and treaty bodies should enhance the use of the Guiding Principles by more regularly invoking them when addressing situations of internal displacement in countries scrutinised by them.

All these efforts may ultimately lead to the recognition that the Guiding Principles should be transformed into a universal convention on the protection of IDPs or even that they should be recognised as an expression of international customary law. This would be binding upon all countries regardless of whether they have incorporated the Principles into domestic law or ratified regional instruments that might be adopted in the future.

Walter Kälin is the Representative of the UN Secretary-General on the Human Rights of Internally Displaced Persons, Co-Director of the Brookings-Bern Project on Internal Displacement and professor of constitutional and international law at Bern University, Switzerland. Email: walter.kalin@oefre.unibe.ch

[1] For the drafting history of the Guiding Principles see e.g., Roberta Cohen, The Guiding Principles on Internal Displacement: An Innovation in International Standard Setting, Global Governance 10 (2004), 459–480, at 460 – 465; Simon Bagshaw, Developing a Normative Framework for the Protection of Internally Displaced Persons, New York 2005;; and Thomas G. Weiss/David A. Korn, Internal Displacement – Conceptualization and its consequences, London and New York 2006, at 55 – 70.

[2] See Walter Kälin, Guiding Principles on Internal Displacement, Annotations, Washington D.C. 2000, highlighting in detail the legal basis for each of the Principles.

[3]  For more information about recent progress, see www.brook.edu/fp/projects/idp/idp_policies.htm and http://refugeelaw.qeh.ox.ac.uk/pdfs/chaloka-beyani-working-paper-april-… 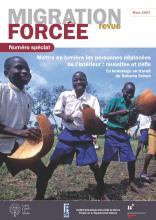