In the Algerian hammada, a hot and harsh region of the Sahara, more than half the Sahrawi people has been waiting for 31 years to go home.

The Sahrawis hail from neighbouring Western Sahara, a country invaded and occupied by Morocco in 1975. Western Sahara is on the UN list of Non-Self-Governing Territories and still considered a colony. Repeated attempts to get Morocco to live up to numerous UN Security Council resolutions – and its own earlier commitments to allow the Sahrawis to return safely to vote in an independence referendum – have come to nothing.

Another generation of young Sahrawis is now growing up as refugees but with dwindling provisions of humanitarian aid and few prospects of a lasting solution. Their parents and grandparents left their homeland for the bleak refugee camps of the Algerian Sahara in 1975, hoping to return soon to a liberated homeland. Today, some 165,000 Sahrawi refugees are still living in camps around the isolated Algerian town of Tindouf, wondering why the world has abandoned them.

Following a 1991 ceasefire between Morocco and the Frente Polisario independence movement, the UN set up a Mission for the Referendum in Western Sahara (MINURSO).1 MINURSO’s mandate to allow the Sahrawis a free and democratic choice on their future has been consistently sabotaged. Morocco has reneged on agreements and created a charade that has now cost the UN close to $700 million, kept the Maghreb region in a constant state of tension and forced the Sahrawi refugees to remain in the camps for another fifteen years. Morocco has massively invested in the berm – a barrier of earth, rock and sand, reinforced with anti-personnel and anti-tank mines, trenches and radar detectors – which stretches for 2,500 kilometres from the Mauritanian border to south-eastern Morocco, protecting the Moroccan garrisons which prevent refugees from returning to their homeland.

Morocco has stationed some 130,000 troops in Western Sahara and encouragement of settlement has resulted in the Moroccan civilian settler population now outnumbering the resident indigenous population by a factor of four. According to human rights agencies and the UN Office of the High Commissioner for Human Rights, life in the occupied territories is characterised by grave and systematic violations of human rights. International focus on providing relief to inhabitants of the Tindouf camps has diverted attention from the needs of vulnerable Sahrawi populations within the occupied territory or of desperate self-settled refugees who have left to join relatives in third countries such as Mauritania and Spain.

Based on a participatory and democratic model of organising camp life, the Sahrawi government and popular movements in the refugee camps ensure the most efficient use of the limited resources allocated by the international community. In 2006 their already precarious situation worsened. Donor fatigue and an intense campaign by Morocco to lobby donor governments has led to cuts in food aid. Repeated appeals by the World Food Programme (WFP) and UNHCR for greater humanitarian aid have largely fallen on deaf ears. In November 2006 WFP warned of the refugees’ critical food insecurity and pointed out that almost two thirds of Sahrawi women in the camps suffer from anaemia and one in three children under five years of age from chronic malnutrition. There are now reports that even emergency buffer stocks are being depleted.

The Norwegian Refugee Council believes the time has come for a vigorous international campaign for the rights of the Sahrawi refugees to an honourable, durable and sustainable return to their homeland. Neglect of the needs and rights of the Sahrawi people by the UN and the international community risks destabilisation of the entire region, further war, displacement and migration. First, however, there needs to be an increased and predictable provision of humanitarian aid to the Sahrawi refugees in Algeria.

NRC calls for a concerted effort to create the conditions for a sustainable repatriation of the Sahrawi refugees once it becomes politically possible. If left unchecked, widespread human rights violations in the occupied territories will force even more people to leave the country to become refugees. Under present conditions, there is little chance that any significant number of Sahrawi refugees would want to return to their occupied homeland. 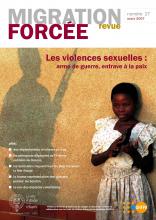