In the absence of mechanisms to protect the population of the OPT, and the reluctance or impotence of the ‘international community’, global civil society activists and human rights campaigners – working with Palestinian and Israeli actors – have stepped into the breach.

The Fourth Geneva Convention, which came into effect in October 1951,[1] represented the post-World War II aspirations of the international community to offer permanent protection to civilians living under military occupation. The breadth of Israel’s derogation in relation to Palestinians living under occupation is comprehensive, with most key Convention articles sporadically or systemically breached. Arguing that the land it calls Judea and Samaria is ‘disputed’ and not ‘occupied’, Israel does not consider the Fourth Geneva Convention as a legal impediment to implementation of policies which have transformed the areas’ physical and demographic landscape.

The Israeli government violates international humanitarian law, the Universal Declaration of Human Rights, the Fourth Geneva Convention and decisions of the International Court of Justice with the passive acceptance of much of the ‘international community’. While the UN and its members clearly view the West Bank, East Jerusalem and Gaza as ‘occupied’, the UN Security Council has barely urged Israel to uphold its human rights obligations. The UN General Assembly has been more vocal, expressing world opinion when it overwhelmingly endorsed the International Court of Justice’s ruling on the Wall – only Israel, the US, Australia and three micro Pacific states voted against. However, the General Assembly is unable to compel Israel to uphold its responsibilities as an occupying force since Assembly resolutions only have moral and symbolic weight and are not legally binding. As noted in earlier articles, UNRWA is not mandated to work with non-refugee victims of occupation.

Since 2002 NGOs and individual activists have taken an increasingly prominent role in trying to redress the lack of official international protection given to Palestinians in the OPT. The deaths of two members of the International Solidarity Movement (ISM)[2] – Rachel Corrie killed by an armoured Caterpillar bulldozer in Gaza in March 2003 and Tom Hurndall shot in the head by an Israeli Defence Force (IDF) sniper in April 2003 – drew global attention to international non-state intervention to protect Palestinians.

The ISM is but one of a host of local and national civil society groups using non-violent action to address the human rights of Palestinians living under occupation. The presence of Israeli and international activists alongside Palestinians undoubtedly constrains the Israeli army and police in the degree of violence they use against legitimate political protest.

Stung by negative publicity, Israel is now acting to restrict access of external civil society actors. The deaths of Rachel Corrie and Tom Hurndall show the willingness of the Israeli state to use lethal force against direct non-violent action but have also brought closer the realisation that Israeli soldiers should not remain immune from prosecution for violations of international humanitarian law. While the Israeli Arab soldier responsible for Hurndall’s death has been convicted, it remains significant that more senior commanding Israeli soldiers have escaped prosecution.

These new forms of solidarity face other difficulties. Outsiders can act in ways in which Palestinians find inappropriate or presumptuous. Getting an unregulated group of activists to work with affected Palestinian communities struggling with the daily realities of occupation to jointly plan non-violent actions can be a delicate process. Nevertheless, non-violent global/local civil society networks have provided vital protective functions in a situation where official protection has been devastatingly threadbare.

Vivienne Jackson, a postgraduate student at the University of Bristol, is a member of Jews for Justice for Palestinians (www.jfjfp.org). For several months she lived as an international volunteer trying to assist inhabitants of the West Bank village of Yanoun to reclaim homes abandoned under threat from extremists from the Jewish settlement of Itamar. Email: vj6002@bristol.ac.uk 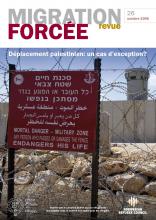