Psychological harm and the case for alternatives

Studies in countries around the world have consistently found high levels of psychiatric symptoms among imprisoned asylum seekers, both adults and children.

Yet, in Canada, as in many other countries, immigration detention centres are prisons in all but name. Detainees are under constant surveillance by cameras and uniformed guards, subject to repeated searches, in a facility with centrally controlled locked doors surrounded by fences topped with razor wire. Men and women are held in separate wings, with a special section for children detained with their mothers. There is no family section, so fathers are separated from their children, although they can see them daily. Personal effects are confiscated. Movement from one area to another within the centre is prohibited unless escorted by a guard.

All aspects of daily life are controlled by rigid rules, and failure to respect rules may be punished by brief solitary confinement or withdrawal of privileges (such as visits). There are virtually no activities except watching television. Primary medical care is provided, but no mental health services. All detainees except pregnant women and minors are handcuffed during transportation. Detainees in need of hospital care are handcuffed, sometimes shackled, while in the public waiting room, and may be chained to the hospital bed. Additionally, close to 30% of detained asylum seekers and refused claimants are held in ordinary provincial jails or remand centres alongside the criminal population, primarily due to lack of space in dedicated immigration detention centres.

Yet in Canada, fewer than 6% of these detainees are suspected of criminality or viewed as a security risk. Asylum seekers (i.e., people whose refugee claim has not yet been heard) and refused claimants are an almost entirely non-criminal and low-risk population. Imprisoning individuals who are not even suspected of criminality is a serious breach of their fundamental right to liberty and fair treatment – rights possessed by all human beings, not just citizens.

Research on impacts on mental health

These findings are in line with those reported by other researchers but are particularly striking because in this case detention was comparatively brief. Also, although conditions in Canadian immigration detention centres certainly could be considerably improved (e.g. with internet access, more activities, elimination of handcuffs), they are better than in many other countries. Nonetheless, imprisonment was a highly distressing experience for most of the detained asylum seekers interviewed in our study.

Imprisonment inherently involves disempowerment and loss of agency – in other words, loss of the ability to make personal decisions, exercise control over one’s daily life and take actions to achieve desired goals. This loss of agency is one of the major predictors of depression as well as one of its core characteristics. Feeling powerless is also an important dimension of post-traumatic stress as traumatic events such as torture and rape typically involve inability to escape or retaliate. Regaining a sense of agency and mastery over one’s life is central to recovery from both depression and post-traumatic stress disorder.

Detained asylum seekers are deprived of liberty and agency not only by confinement but also by rigid rules, constant surveillance and the use of restraints. When immigration agents first decide to detain an asylum seeker, the latter is handcuffed and transported to the detention centre in a locked van. This is generally experienced as degrading and humiliating, and typically described as “being treated like a criminal”. At the detention centre there are multiple restrictions. For example, when a newly detained asylum seeker refused to get up at the compulsory 6am wake-up call, he was placed in 24-hour segregation for insubordination. Similarly, in one detention centre, men were not allowed to go back to their rooms during the day nor to take naps in the common room, with no recognition that many of them suffered from insomnia, often trauma-related, compounded by the disturbances of night rounds.

This kind of tight control over the most minute details of daily life, normally reserved for dangerous criminals, is experienced as a loss of dignity and agency. More fundamentally, detained asylum seekers cannot take steps to achieve security and start rebuilding their lives. They can do little but wait and worry: wait for their identity papers to arrive, wait for their detention review hearing, wait for their immigration agent or lawyer to return their calls, worry that their detention will be prolonged, worry that they will be deported, worry about their families back home.

Such conditions would be difficult for anybody but are particularly distressing for asylum seekers, most of whom have experienced violence and mistreatment in their country of origin. Asylum seekers are often amazingly resilient and able to recover even from severe trauma when placed in favourable conditions, including quick access to secure status, employment and basic services and rapid reunion with close family. On the other hand, stressors such as immigration detention can be the final straw that will tip the balance towards mental health problems. Certain people are particularly vulnerable, including children, pregnant women and persons who have experienced severe trauma such as torture or rape, but asylum seekers in general are a potentially vulnerable population because of high rates of exposure to traumatic events. They are in need of respect, support and fair treatment, not imprisonment.

Janet Cleveland janet.cleveland@mail.mcgill.ca is a psychologist and researcher at the CSSS de la Montagne Research Centre. 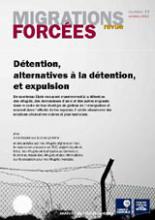