Mini-feature on Humans and animals in refugee camps - introduction

The seven articles in this FMR mini-feature explore the roles that animals play in the lives of people who have been displaced. Evidence from animal–human interactions in refugee camps across the world demonstrates the challenges that face both human and animal populations. Better understanding of their needs and greater cooperation between humanitarian and animal welfare organisations can inform how space is organised, risks are mitigated and relations with host communities are managed.

All articles in the mini-feature are also available individually online in all three languages in HTML, PDF and (English only) audio format.

This mini-feature has been published as part of FMR issue 58 which is available in English, Arabic, Spanish and French free of charge. (Note that the French edition does not include the mini-feature.) If you would like print copies of the full issue in any language, please email the Editors at fmr@qeh.ox.ac.uk.

This mini-feature emerges from the ‘Humans and animals in refugee camps’ project, which is supported by a Wellcome Trust Seed Award in Humanities and Social Science 2016 [award reference 205708/Z/16/Z]. The mini-feature aims to highlight for practitioners and policymakers the variety and importance of human–animal interactions in camps, drawing on the experiences of an international team of contributors, and to spur further research on the topic.

The authors welcome responses to this initial stage of the project from practitioners and researchers engaged in any of the many relevant fields. An email address, at which authors may be contacted, is included with each article. For more general queries about the project, please email the project coordinator, Benjamin Thomas White, at BenjaminThomas.White@glasgow.ac.uk 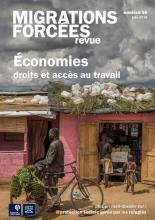