If you were designing a thought-provoking case study for a workshop on humanitarian dilemmas Darfur has it all: IDPs living in both camp and host community settings; returnees and refugees; a complex emergency already being considered ‘post-conflict’; tension between the principle of ‘assistance according to need’ and donor interests; a mass of agencies on the ground with resultant coordination challenges; linkages with conflicts elsewhere and attempts at their resolution;  decreasing funding; considerable media attention; the fear of assistance prolonging conflict and the question of how best to maintain neutrality in a conflict. In the midst of these issues many programme decisions involve dilemmas, one of which is whether to expand assistance beyond camp settings.

Humanitarian agencies in Darfur seem to be moving away from an emergency response model, with the majority of assistance provided in camps, towards a ‘post-conflict’ or ‘development’ model, with more projects implemented in areas of origin. This shift is strongly endorsed by the government but is arguably premature, and certainly ambitious, before a peace agreement is in place. Expanding their area of operation makes it more difficult for NGOs to maintain neutrality and hold fast to the principle of providing assistance according to need.

There are good reasons for implementing activities beyond the camps. Major attacks on civilian communities appear to have ceased. Concentrating assistance within camps reduces freedom of movement at a time when families are trying to cultivate. The needs of war-affected communities living outside the camps must be taken into account as NGO access becomes easier.

But the promise of assistance should not be used to draw people out of the camps and into villages, perhaps against their better judgment. NGOs recognise that leaving people no option but to go to camps in order to access assistance is undesirable but they are hesitant to provide aid in villages of origin for several reasons. They fear that any assistance provided will be used by the government or other actors to encourage premature return for political rather than humanitarian reasons. Some NGOs feel that they have not yet achieved ‘minimum standards’ in their current programmes and so are hesitant to expand. Some face donor conditions stipulating that programmes only assist IDPs, making assistance in villages of return to non-IDPs problematic. For those agencies with more flexibility vis-à-vis target groups, providing assistance on the basis of need requires that the relative needs of farmers and pastoralists also be assessed. NGOs fear that providing assistance to the so-called ‘Arab nomad’ groups will alienate the IDPs. Not providing assistance, on the other hand, may make the international community appear partisan, at least to the nomads.

The principle of providing assistance according to need dictates that the status of a beneficiary – whether or not, for example, he or she is an IDP – should not determine entitlement to assistance. This leads to a presumption that assistance should be made available as widely as possible, while the ‘Do No Harm’ principle requires that the risk of humanitarian activities having negative consequences, such as exacerbating tension between communities, is always considered. Evaluating the potential negative repercussions of providing assistance is further complicated in the case of return movements which may be the result of ‘undue inducements’. It is not surprising, given the complexity of the situation, that NGOs may decide to avoid taking risks and concentrate instead on implementing activities within their current areas of operation. This strategy has been criticised as a policy of ‘humanitarian containment, not humanitarian action’.[1] Others argue that it is simply the most prudent response when operating in an ongoing political crisis.

To facilitate humanitarian action rather than containment, a Letter of Understanding (LoU) was signed in January 2005 by UNHCR and the Sudanese government outlining the responsibilities of each party and emphasising principles such as humanitarian access and the right to return. It is based on a standard Tri-Partite Agreement for the repatriation of refugees made between a host country, the country of origin and UNHCR. For IDPs, however, it is not as effective a tool for protection as might have been hoped. While the LoU states that the government shall ensure that IDPs “are able to decide freely whether or not to return without coercion, pressure or undue inducements” the consequences, if any, of employing ‘undue inducements’ are not spelled out. Nor is it explained what a legitimate inducement might involve.

In repatriation operations UNHCR can cite the concerns of the country of origin in its advocacy with the host country and, in many cases, can choose to cease facilitating voluntary return. In Darfur, however, UNHCR is not facilitating return and cannot play the role of honest broker. The LoU relates only to West Darfur and does not apply to either of the states of North or South Darfur. Relief agencies are left to decide for themselves what action to take when they suspect a return movement has been ‘unduly induced’. Withholding assistance will compound any problems being faced by the unwilling returnees, while providing assistance may be seen as condoning involuntary return.

Seeing the wood for the trees

Certain major donors are concerned that ‘the bigger picture’ – deciding what will constitute achievement of long-term objectives – appears to be lacking. The Darfur situation has been dubbed a crisis of protection and its resolution will be judged in terms of protection. There seems to be consensus that, for the international community, the objective is not ‘everybody home’ (whatever ‘home’ may mean) but conditions in which people feel free to ‘stay or go’, that is, freedom of movement. To demonstrate freedom of movement, some people have to return, and if people are returning, many argue that assistance should be provided to facilitate that process. However, a strategy must be adopted which clearly distinguishes the objective of enhancing freedom of movement from possible indicators of success, such as return.

It follows that the LoU between UNHCR (charged with the protection of IDPs) and the government (accused by many of being the cause of their displacement) should be carefully explained to all stakeholders, in particular to NGOs and IDPs. It should be made clear that while there is agreement on the desirability of promoting conditions conducive to voluntary return, success will be gauged according to the benchmark of freedom of movement, and not numbers of returnees.

All protection objectives and tools, not only the LoU, need to be carefully and consistently explained to stakeholders. This is threatened, however, by ‘creative’ use of language in discussions about IDP movements, in which the term ‘enticed return’ (or even ‘incentivised return’) is increasingly being used in place of ‘induced return’. If ‘induced return’ implies the continued violation of rights, ‘voluntary return’ signals the end of the conflict in sight. The wordsmiths appear to be seeking a middle way, using ‘enticed return’ to reflect the hard political or practical motivations of those wishing to see rapid return, combined with comparatively ‘soft’ methods for instigating it.

NGOs and others are concerned that all ‘enticed’ returns are being considered voluntary. Is this because the UN is unsure of what action to take if a return – which has already taken place – is classified as involuntary? In July 2005, the UN Mission in Sudan reported a movement of IDPs in West Darfur which took place with government ‘incentives’, implying disapproval but not classifying the movement as involuntary, inappropriate or induced.[2] The report does not use the language of the LoU which contrasts ‘coercion, pressure or undue inducements’ with the ‘voluntary character of return’. Does this indicate a desire, perhaps for good reason, to avoid addressing issues head on?

Another cause of confusion is that, according to some, almost all movement of IDPs out of camps, even secondary displacement, is being classified as ‘return’. The LoU seems to allow this interpretation by referring to ‘regions and villages of origin, or choice of return’. While reasonable in the context of repatriation, it seems anomalous to talk of ‘return’ when it is IDPs moving to new areas. The classification of various types of movement as return may be because UNHCR is keen to ensure that its protection mandate is engaged in every possible situation. It is confusing, however, for practitioners on the ground, who may suspect that the motive relates instead to a general desire to see more returns, because return is equated with ‘success’.

UNHCR treads a careful line with the government and NGOs, as illustrated by its response to a government plan for the rehabilitation of 76 war-affected villages. UNHCR welcomed the plan in principle but limited its support to just seven of the proposed villages. It adopted a position of ‘de-linking’ assistance from return, partly to reassure NGOs and IDPs that the objective was not to promote return, not even to rehabilitated villages. UNHCR prioritised for assistance, however, villages where return had already taken place, arguing that the presence of returnees indicated favourable security conditions. This can appear contrary to the aim of ‘de-linking’ assistance from return, especially because many actors are conscious that UNHCR's mandate focuses on IDPs and returnees and not on assistance per se. There is a danger that anything UNHCR does will be viewed in the light of promoting return in an environment in which return is an extremely sensitive issue.

Many NGOs view UNHCR’s support for government plans, if only in principle, as allowing the agenda to be driven by the government rather than proactively advocating on behalf of the displaced. UNHCR wants to be seen to be taking concrete action to improve conditions but can only do so with the assistance of the NGO community. Meanwhile, the NGOs are frustrated because what they want from UNHCR is not, for example, a list of villages in which to work, but strong advocacy for IDP protection in order to fulfil a function they have difficulty discharging themselves. It is not enough for UNHCR to be using its good offices to advocate forcefully with the government if they are not seen to be doing so by the NGOs and the IDPs.

Why has UNHCR failed to win over the various stakeholders? Many actors on the ground describe coordination in West Darfur as ‘unusually good’. Nevertheless, there is significant misunderstanding between agencies and this is what lies at the heart of UNHCR’s difficulties. Coordination of relief activities may be good but communication of protection strategies and forward planning is not. If communication is lacking, so too is leadership. Getting agency representatives together in a room is no substitute for intervention with potential and real abusers, and will not necessarily provide a clear statement of objectives and a strategy to achieve them. What is needed is leadership, particularly in an environment in which NGOs feel vulnerable in the face of government pressure and would appreciate the cover which can be provided by a UN agency.

OCHA’s mandate to coordinate will not in itself lead to effective protection delivery. Of the two mandated ‘protection agencies’, UNHCR is struggling with the challenge of leadership, hamstrung by inter-agency bickering, confusion over its mandate and limited funding. ICRC, in its largest operation worldwide, appears characteristically disengaged from the activities of other agencies.

Leadership in a highly political environment requires intense communication. While the confusion inherent in the Collaborative Response makes effective communication more difficult to achieve, it also makes it more essential. Objectives must be carefully explained to all stakeholders and sufficient time and resources dedicated to doing so. It is not enough for an agency such as UNHCR to have a strategy. That strategy must be shared with other actors and the agency must be given, or must mobilise, the means necessary to implement it. 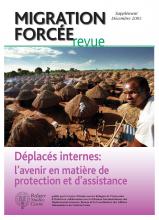