Can the UK develop accommodation centres in a trauma-informed way?

Medical assessments provide evidence of the negative impact of the UK’s accommodation centres on the health of asylum seekers. A trauma-informed approach should underpin the government’s future strategy in this area.

Although there was a drop in the number of new asylum claims in 2020 and 2021 in the UK, since 2020 there has been a rise in the use of institutional forms of contingency asylum accommodation. This is due to backlogs in decision-making, the suspension of evictions from asylum housing during the pandemic, and resource issues with securing accommodation for asylum seekers being ‘dispersed’ to other parts of the country. The number of asylum seekers housed in hotels reached approximately 10,000 in mid-2020, and in September 2020 the government approved the use of two disused army barracks, Penally Camp and Napier Barracks, as accommodation for hundreds of male asylum seekers.

The use of and conditions within these disused military barracks have been severely criticised by the UK courts, inspectorates, the Welsh Assembly, medical organisations and the British Red Cross.[1] An outbreak of COVID-19 at Napier barracks in January 2021 saw at least 197 confirmed cases among a population of 380. Napier and Penally (the latter having since been shut down) are situated in relatively remote locations. While residents were permitted to go outside the camps (subject to Covid restrictions), for the most part they did not have the means to do so.

In March 2021, the government’s New Plan for Immigration included a proposal to end the use of hotels as asylum accommodation, claiming that these are a ‘pull factor’ for migrants, and instead creating “reception centres to provide basic accommodation and process claims” as part of a tougher approach that will “discourage asylum claims via illegal routes”.

In 2020–21, clinicians from the Helen Bamber Foundation undertook medical assessments[3] of six people accommodated in Penally Camp and two accommodated at Napier Barracks, who had been referred due to concerns about their welfare.[4] All of the people assessed showed evidence of worsening mental health. Five were experiencing a worsening in Post-Traumatic Stress Disorder symptoms and all presented with clinical symptoms of depression. Those assessed included a domestic abuse survivor who was experiencing suicidal thoughts for the first time in his life, and a Syrian war survivor who had no history of mental illness prior to being placed in the camps. Those who were assessed said the accommodation sites were like prisons; in some cases this triggered a trauma response, particularly from those with a related history of torture in a military camp. Sleeplessness, lack of privacy, and uncertainty about how to access medical care or being denied medical care (including being triaged by non-clinically qualified staff) were frequently reported. Uncertainty about how long the people assessed would be on the site was also documented as decreasing their ability to cope with the accommodation conditions.

These findings are consistent with the medical assessments of 15 people accommodated at Napier Barracks undertaken by clinicians from Doctors of the World in 2020 and early 2021. Doctors of the World recorded significant barriers to accessing health care, with one nurse provided for 390 people and mental health referrals being rejected by mainstream mental health services. Forrest Medico-Legal Report Services, which assessed 17 people in Penally Camp, reported similar findings.

The findings of a literature review of the impact of this kind of institutional accommodation on health[5] indicated that, even after accounting for pre-existing health vulnerabilities, this kind of institutional accommodation “is itself associated with poorer mental health outcomes”. The review highlighted factors such as those emerging from the assessments, mentioned above, plus others such as isolation, lack of freedoms, lack of access to cooking facilities, and reduced access to legal, professional and specialist assistance.

People seeking asylum have often experienced traumatic life events. Trauma symptoms can be severe and long-term and can have a substantial impact on people’s ability to participate effectively and safely in an asylum determination process.

In the UK, people who are identified as potential victims of modern slavery can access the NGO-operated ‘safe house’ system run through the National Referral Mechanism. Safe house accommodation is provided as part of an individualised Recovery Needs Assessment where a support worker creates and updates a person-centred recovery plan, informed by a trauma-informed Code of Conduct.[6] We are also aware of examples of good practice in some asylum accommodation, but this depends on arrangements between local doctors’ surgeries and local authorities rather than reflecting a national standard.

Refugee populations will have needs that are to some extent distinct from those of victims of modern slavery. However, a trauma-informed service for asylum seekers and refugees could embed a focus on ‘recovery’, trauma-informed training, early identification mechanisms and wrap-around support to prioritise recovery needs, moving away from a focus on destitution management where only the most basic shelter, food and hygiene needs are addressed. This alternative model of an accommodation centre has not yet been fully tested in the UK but was explored by the UK Refugee Council in 2002. In 2022 these issues were looked at in a UNHCR-evaluated pilot on alternatives to detention, which emphasised the importance of ‘connectedness’ in asylum recovery services,[7] and we understand that a similar model is currently being developed in Ireland.

If the UK government follows the model of Penally Camp and Napier Barracks, the new accommodation centres risk becoming sites of social exclusion with a preoccupation with limiting destitution rather than restoring dignity. Generalised standards designed only to manage destitution levels are unlikely to meet the needs of particularly vulnerable people or allow for identification of groups of particularly vulnerable people.

Penally Camp and Napier Barracks were opened in haste, without proper planning or consultation with the local authorities and bodies whose support and services would have been key to the successful running of such large-scale asylum accommodation sites. This was to the detriment of the residents and to the protection of their rights, compounded by poor communication about why they were allocated to this accommodation and how long they would have to stay. To avoid a repetition of these issues with any new accommodation centres, the UK government must ensure that: plans have been thoroughly tested with all relevant parties, in particular with local health and specialist services; the operation of the centres is closely monitored; and residents’ individual needs are met, including in terms of information regarding progress on their asylum claims and access to legal support.

Furthermore, it is important that the people affected are consulted and involved in each stage of the process. People being housed in asylum accommodation may already have survived human rights abuses linked to accommodation, such as unlawful appropriation of property, involuntary resettlement and deprivations of liberty. There are several human rights standards relevant to the provision of accommodation in general but no international consensus on the standards that should be applied to reception centres. From a human rights perspective, any minimum standards relating to institutional asylum accommodation may need to focus on establishing safeguards to prevent serious breaches of fundamental rights. The UN has formulated Standard Minimum Rules for the Treatment of Prisoners (known as the Nelson Mandela Rules), while the UN Bangkok Rules provide similar measures specifically addressing the treatment of women offenders and prisoners. The risks that these rules address – including abuses of power, mistreatment between prisoners (such as bullying, assault or exploitation), and public health and welfare risks – can arise in asylum accommodation and particularly in those reception centres which may be more like, or experienced as more like, imprisonment.

Given the unpopularity of such accommodation centres (among civil society as well as those housed within them), and the serious challenges the centres present in relation to human rights and access to legal and welfare services, a new approach is called for. It is important that evidence that arises through research, litigation, inspections and individual and professional testimony is presented to elected representatives and that international connections are built in order to share information and good practice.

[1] NB and others v the Secretary of State for the Home Department, with Liberty and JWCI intervening [2021] EWHC 1489(Admin); HMIP and ICIBI (2021) An inspection of contingency asylum accommodation: HMIP report on Penally Camp and Napier Barracks (November 2020 – March 2021) https://assets.publishing.service.gov.uk/government/uploads/system/uploads/attachment_data/file/1005065/An_inspection_of_contingency_asylum_accommodation_HMIP_report_on_Penally_Camp_and_Napier_Barracks.pdf

[3] These assessments took place via digital forms of communication due to the pandemic.

[6] See Witkin R and Robjant K (2022) Trauma-Informed Code of Conduct For all Professionals working with Survivors of Human Trafficking and Slavery
https://www.helenbamber.org/sites/default/files/2022-01/HBF%20Trauma%20Informed%20Code%20of%20Conduct%202nd%20Edition.pdf 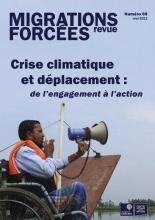