Nearly a refugee: thoughts from Cairo

Turbulence in North Africa and the Middle East has forced many to flee their homes and countries. One woman in Cairo, on the brink of flight, considers her options.

As I packed my bags, and threw in a few toys for my two young boys, I was struck by a pang of anxiety and fear. What if this move to seek safety during these turbulent days in Cairo ended up being longer than we expected it to be? What if we ended up being unable to go home?

And as my mind raced to figure out where we could go and what we would do if the worst case scenario unfolded, I remembered my first days of working with UNHCR in 1998. Reading the Handbook on Procedures and Criteria for Determining Refugee Status as part of the orientation for my new job as Protection Assistant in UNHCR’s Cairo office had struck a chord. I had always had the sense that having to leave one’s country and seek asylum elsewhere was not such an alien prospect to many in the Middle East, as things were so unstable and mechanisms to address deep-seated grievances unreliable, to say the least. I felt a strong affinity and sense of empathy for asylum seekers in Egypt. And this was not because I had ever been put in that kind of situation. Quite simply, it was because I lived in the Middle East, and I knew that it could happen to any one of us living there, at any time.

When the revolution of 25 January 2011 erupted in Cairo and across many other Egyptian cities, it was extremely difficult to predict where it would lead. Demonstrations and public protests had increased significantly in number and size in recent years, yet never had the country witnessed popular mobilisation on this scale. It was stunning, inspiring, energising. Then, just as the country was starting to ride the wave of exhilaration that came with the release of so much pent-up repression and the opportunity to finally have a voice, tragedy struck on 28 January. The police fired live ammunition at peaceful demonstrators, killing over 300 people and injuring more than 6,000 others. There then followed a series of events which led to complete lawlessness. Prison cells were raided and an estimated 23,000 inmates were set free. Police stations were abandoned by their officers and stockpiles of weapons and ammunition were stolen. The police disappeared from the streets of Cairo, and fear ran through the country as thugs and criminals were reportedly vandalising and destroying public and private property. Popular Defence Committees appeared out of nowhere to patrol neighbourhoods all night to keep homes and families safe after curfews were imposed.

Our neighbourhood was expected to be one of the prime targets for vandalism and violence due to the large number of government officials and businessmen who lived in it. It was thus during this time that my family decided to move to a safer location, in a busier neighbourhood where we would be less visible as part of a larger crowd. Which brings us back to my packing…

As I packed, I felt my heart race and my head become flooded with worries over the safety of our two young children. Should we perhaps leave the country? And if we did, where would we go? Where did we have valid visas for? And how could I leave my parents here alone? How would we secure our home once we left? How long could we stay away? Where would we get the resources to live while we were away? And finally, the big question, if things really blew up and we couldn’t go back, would we apply for refugee status?

I paused for a second, then quietly went to the bookshelf and picked up my old, tattered copy of the Handbook – just in case, I thought to myself. It had guided me so many times in my case assessments for asylum seekers I had interviewed from war-ravaged countries such as Sudan, Somalia, Ethiopia, Eritrea and Iraq. And now, I thought, it might very well apply to me and my family.

The security and political situation remained unstable and extremely unpredictable until the President finally stepped down on 11 February. Following the scenes of euphoria and jubilation in Tahrir Square, a relative degree of order and some sense of normalcy started to be restored, despite the shockwaves which had swept throughout the world with the fall of the Egyptian regime. Thankfully, my fear of total breakdown did not materialise and I did not need my Handbook. But in Libya, where the popular uprising is being met with violent resistance, thousands are fleeing in fear of their lives into Egypt and Tunisia. These two countries of asylum, which helped inspire the Libyan movement, are themselves still reeling from their own revolutions and widespread social upheaval, yet are keeping their borders open.

So, in the end, I didn’t need the Handbook but this experience was, if nothing else, a lesson in humility. What we experienced, while very real, can in no way be compared to the experiences of people caught in the middle of wars, who lose family members, who are personally attacked, or who  travel for days on end to reach safety – and perhaps never do. Put yourselves in the shoes of a refugee for a day, a week, a minute. And I can assure you, you will never again take your safety, rights and future prospects for granted.

Shaden Khallaf (skhallaf@aucegypt.edu) is currently teaching at the Center for Migration and Refugee Studies at the American University in Cairo (http://www.aucegypt.edu/GAPP/cmrs/).

This article is written in a personal capacity and does not reflect the views of the UN or the AUC. 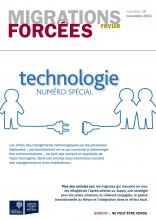