This article explores how attempts by UNHCR and others to empower women in refugee camps are reinterpreted and given new meaning by the refugees themselves.

Women’s issues have become increasingly central in UNHCR’s policies over the past 15 years. Often lumped together with children in surveys, they are perceived as vulnerable victims of war:

“Among the people hit hardest by the violence and uncertainty of displacement are girls, elderly widows, single mothers – women. As a rule of thumb, some 75 per cent of these destitute displaced people are women and their dependent children.”(1)

Evoking the picture of women and children, NGOs and UNHCR are able to appeal to our humanitarian sympathy. As Liisa Malkki(2) has pointed out, children and female refugees epitomise bare humanity. Women are construed as more ‘true’ refugees, being the victims rather than the perpetrators of war and violence. However, this picture also reduces a refugee woman to the level of an infant and leaves her without agency and responsibility.

UNHCR is very concerned with the question of agency, and empowering women and getting them to participate in camp activities have become central aspects in the policies of UNHCR and other relief agencies. In Lukole Refugee Camp in Tanzania where I did over a year’s fieldwork(3), they were not only concerned with helping women – protection from rape, access to food and medical help, etc – but were also very concerned with helping women to help themselves. This ‘help to self-help’ or empowerment of refugees in general and of women in particular was not merely meant as a means for attaining certain (material) goals. Empowerment was also a means of combating apathy and dependency among refugees, and of giving them a certain amount of self-esteem. To quote UNHCR’s guidelines on the protection of refugee women:

“Participation itself promotes protection. Internal protection problems are often due as much to people’s feelings of isolation, frustration, lack of belonging to a structured society and lack of control over their own future... Refugee participation helps build the values and sense of community that contribute to reducing protection problems.”(4)

In other words, women refugees are to be given back the agency that they allegedly lost as victims of war. This whole idea of empowerment and participation is based on a modern ideal of (democratic) citizenship and (equal) rights.(5)

So how do refugees react to this ideal of equal rights? How do they interpret the changes in the camp and the ways in which relief agencies administer food and other resources?

When I asked Burundian refugees in Lukole Refugee Camp(6) about changes in gender relations after coming to the camp, men and women alike were all very keen to give their opinion. The general impression I received – from the many qualitative group interviews as well as a survey of 464 refugees – was that of moral decay. Things were no longer as they used to be, they would say. Women were becoming prostitutes, men were polygamists, divorce rates were going up and young men were marrying old women. A general theme in most interviews was that women no longer respected their husbands. If I enquired more about this, the answer was quite clear: “Women find UNHCR a better husband.” By this they meant that men ideally should provide for their wives and children, while women and children should obey and respect the men. But in the camp, according to the refugees, UNHCR (or merely the white man) would provide food for everybody, irrespective of age, gender or status. So, according to this reasoning, the women only respect and obey UNHCR.

In a paradoxical manner, the ideal of everyone being equal before UNHCR has been reinterpreted in terms of UNHCR or the white man taking the place of the husband and the father. In other words, the men in the camp felt that their position as breadwinners and figures of authority was under pressure. UNHCR was taking their authority and their women from them. A consequence of this was to be reduced to becoming equal with helpless women or children, which was certainly not a desirable state. As a young man said upon being asked whether he could see any changes in the camp: “There is a change. People are not taking care of their own life. They are just like babies in UNHCR’s arms.”

The general feeling of loss and of social and moral decay that follow flight and arrival in a refugee camp is often interpreted in terms of gender relations, and men’s feeling of powerlessness is projected onto UNHCR and its policy of empowering women. UNHCR has simply taken their women and their masculinity.

When I first went to Lukole, I was surprised to find that a large group of young men in the camp were extremely successful. The first surprise was the number of very young male street/village leaders in the camp. I interviewed leaders who were only 21 years old and who had been leaders for several years. This conflicted with my assumptions about Burundi society where age gives status and one is not considered a real man worth listening to until much older. The refugees themselves provide some plausible explanations for the phenomenon. They explained that one has to be very mobile to be a leader: constantly moving from the UNHCR office to the food distribution centre, to the police post and back to the village/street. Furthermore, a leader in the camp preferably has to know languages, with English and Swahili being more useful than French and Kirundi (the official languages in Burundi). Finally, one has to be adaptable and not ‘be shy’. In other words, one must be able to learn the jargon of relief agencies and dare to approach them in the right way. These are all virtues where the youth have an advantage over the older men.

Similarly, I found that a large group of young men had found jobs with NGOs. They held many of the same qualifications as the leaders and held equally important posts in the camp. Being employed by an agency gave access to resources and power. Their position as intermediaries between NGOs (providing resources such as medical assistance, education, social services and security) and the beneficiary population enabled the individuals involved to build up horizontal networks with each other and vertical networks of patronage. Often these networks were intermeshed with the camp’s formal leadership structure and strongly linked to the two clandestine political parties in the camp.

Although political activity is banned in refugee camps in Tanzania, it is common knowledge that two rival (Hutu) opposition parties were very active in recruiting members in Lukole. Being a member of the right party would often help a young man in getting a job with an agency. It could also strengthen his position as a leader. More importantly, however, being a party member gave a sense of identity. Party leaders showed strength and were respected – even feared – in the camp. They had a purpose in life and had taken their future in their own hands, instead of hanging around the camp playing cards and getting drunk like other young men. Party members were even defying UNHCR and Tanzanian law, playing instead by their own rules. One could say that they were taking back what UNHCR had allegedly taken from them. They were reasserting their masculinity.

UNHCR and other relief agencies strongly emphasised gender equality and women’s participation in Lukole Refugee Camp. My findings in the camp show that, instead of empowering women, these policies had the paradoxical effect of providing upward mobility for a group of semi-educated young men. The ideology of gender equality was perceived as a threat to their masculinity with UNHCR taking their place as husbands and fathers, reducing them to siblings or helpless women. In their fight to regain their presumed lost place, they managed to out-manoeuvre the older generation of men, mainly due to their ability to adapt to the new surroundings and to approach relief agencies in the right manner. Thus, we see a change in relations between generations.

One might expect that the changes in the camp had also brought about new possibilities for a group of educated young women as well. However, men and women alike interpret changes in the camp according to a dominant gender ideology based on male superiority. Even young, educated women working for NGOs believe, on the whole, that men are supposed to be masters and that equality only creates problems; they may consequently give half of their wages to their husband in order not to antagonise him.

It has not been the purpose of this article to criticize UNHCR policy on gender in general, and I do not plead for a shift to a cultural relativist approach endorsing patriarchal or other oppressive structures in the name of cultural sensitivity. This article merely points out some of the unintended consequences at the local level of such general policies. These unintended consequences occur as a result of the refugees’ reinterpretations of well-intended relief programmes in the camp, in this particular case creating some quite unexpected effects on age and gender relations.

Simon Turner is currently a Ph.D Candidate at the Graduate School for International Development Studies, Roskilde University, Denmark. He lived in Ngara, Tanzania, from 1996 to 1998. Email: turner@ruc.dk 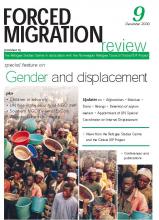