The Guiding Principles - How do they support IDP response strategies?

It is a great pleasure to be in Oslo again. I would like to thank the Norwegian Refugee Council and its Secretary-General Steinar Sørlie and the Global IDP Project led by Marc Vincent for the important work they are doing worldwide for IDPs.

I also thank them for the collaboration they have extended to the Representative of the UN Secretary-General on IDPs, Francis Deng, and for today’s programme which focuses on an aspect of internal displacement often overlooked – the response strategies of IDPs and how the international community can support them.

The Guiding Principles on Internal Displacement are an important tool for IDPs. Presented to the UN in 1998, they are the first international standards for IDPs. They consist of 30 principles which identify the rights of IDPs and the obligations of governments and insurgent groups toward these populations. They also provide guidance to all other actors engaged with IDPs – in particular international organisations and NGOs. They cover all phases of displacement – prior to displacement (the right not to be displaced), during displacement and during return or resettlement and reintegration. They are based on international human rights law, international humanitarian law and refugee law by analogy. They bring together into one document all the provisions of international human rights and humanitarian law relevant to IDPs. What is unique about the Principles is that in addition to restating provisions of existing law they tailor the provisions of the law to the specific needs of IDPs.

The Principles were developed by a team of international legal experts under the direction of the Representative of the Secretary-General and in consultation with a wide range of international organisations, NGOs and research institutions. Although they are not a legally binding document like a treaty, since their presentation to the UN Commission on Human Rights in 1998 they have fast acquired a good deal of international standing, moral authority and acceptance. One reason for this is that they are based on, and are consistent with, binding law. Another reason is the overriding need for a document relevant to IDPs. Prior to their preparation, there was no single document to turn to on internal displacement.

International organisations, regional bodies, non-governmental groups and a growing number of governments have acknowledged the Principles and are using them as a basis for policy and law. Indeed, a unanimously adopted resolution by 53 states during the April 2001 UN Commission on Human Rights recognised that an increasing number of states, UN agencies and regional and non-governmental organisations are making use of them. The resolution called for their further dissemination and application.

How can the Guiding Principles support the response strategies of IDPs? There are five principal ways.

First, the Guiding Principles provide a framework for understanding the problem. In many countries IDPs do not realise that they have certain rights or that local authorities have obligations toward them. They are not aware of internal displacement as a phenomenon or do not realise that people in other countries are suffering in the same way and that international approaches are being developed to address the issue. In Indonesia, for example, I found IDPs interested to learn about a document that explained their plight and showed them that internal displacement is a worldwide problem for which solutions are being sought and that there might even be an emerging international responsibility toward IDPs. In Macedonia, where I have been on two different occasions to lead discussions on internal displacement and the Principles, displaced persons were interested in learning more about their situation and how it compared with other situations in Europe. The Principles thus are a valuable framework for promoting a greater understanding of what is happening to people when they become forcibly displaced.

Second, the Guiding Principles are an empowerment tool. When displaced people learn that certain standards exist which bear on their plight it gives them ideas for empowering themselves. Just look at the language of the Guiding Principles. They assert, for example, that IDPs have the right to request and receive protection and humanitarian assistance from national authorities. They speak of participation of IDPs in planning and distributing supplies and in planning and managing their returns and reintegration. This is empowerment language. I saw this to be the case in Colombia when meeting with a group of internally displaced women from all parts of the country. Despite the security threats they faced and the material deprivation they suffered, they were heartened to learn that a document existed with articles specific to their particular needs. In particular, Principle 20 on the right of women to have documents in their own name resonated with these women. This is something they could use, they said. Right now, the Brookings-CUNY Project on Internal Displacement, which I co-direct, is working with NGOs in Colombia to develop an outreach campaign to displaced communities based on the Guiding Principles so that these communities can better use the Principles in support of their own response strategies.

Third, the Guiding Principles are a monitoring tool, a valuable benchmark for measuring conditions in a country. At present, a number of regional and non-governmental organisations are monitoring conditions in particular countries in terms of the Principles. Displaced communities can begin to undertake monitoring as well. One can see the beginnings of this in Colombia, Sri Lanka, Georgia and Macedonia, where the Principles have been translated into the local languages and outreach programmes are underway.

Fourth, the Guiding Principles can serve as an advocacy tool. Of course, this works best when IDPs are already in conditions of relative safety and can pursue advocacy vis-à-vis their local and national authorities. In the Southern Caucasus, for example, IDPs are working together with lawyers in Georgia, Azerbaijan and Armenia to examine the laws and regulations in their countries in terms of the Guiding Principles and to advocate for legislative reform. When discriminatory electoral laws were identified in Georgia, a group of IDPs made an appeal to the Supreme Court. When the court did not rule in their favour, IDPs together with NGOs appealed to the government which announced at the UN that it would explore bringing this particular law and other laws into line with the relevant provisions in the Guiding Principles.  Another compelling example can be found in Sri Lanka where an NGO consortium (the Consortium of Humanitarian Agencies) organised a meeting between IDP camp commanders and IDP representatives using the Guiding Principles as the framework. At the meeting, the representatives of the IDPs advocated for better conditions, in particular more ample food rations, more timely deliveries of food, clean water and more personal security in the camps. They found the Principles a valuable vehicle for making their concerns known.

Fifth, the Guiding Principles define ‘protection’ for IDPs and provide a framework for developing protection strategies. IDPs not only need food, medicine and shelter. They also require protection of their personal security and human rights. Indeed, IDPs often point out that protection against assault, rape and forced recruitment is as essential to them as material assistance. While there is no international consensus on who should undertake protection activities in support of the response strategies of the displaced, the Handbook for Applying the Guiding Principles, published by the UN and the Brookings Institution, does set forth the kinds of steps that can be taken to enhance protection for IDPs.  It contains sections on ‘What You Can Do’ which offers a framework for a protection strategy. The Handbook, for example, suggests that channels of communication should be opened between displaced communities and national or local authorities and it shows how international organisations and NGOs can assist in achieving this. It also calls for members of displaced communities to visit proposed relocation sites with a view to evaluating their safety. On a trip to Angola last year, the Representative of the Secretary-General recommended that NGOs and international organisations consult with displaced populations to develop protection strategies using the Guiding Principles and Handbook as the base.

The Handbook for Applying the Guiding Principles must also be translated and disseminated in the more than 40 countries affected by internal displacement.  Here, an even worse deficiency exists. The Handbook exists at the UN in published form in English only, even though the Handbook sets forth (and indeed is the only text that does set forth) what international organisations, NGOs and IDPs can do to reinforce response strategies. Unfortunately, the UN has not fully focused on the importance of empowering local displaced communities. It has not initiated translations of this booklet into the UN’s working languages or developed outreach strategies to use the booklet in these languages.

Strengthening the response strategies of IDPs is one of the most important ways we can help. As emphasised in the Norwegian Refugee Council’s new book, Caught Between Borders, IDPs are not just victims but resources. We must work to reinforce their capacities and help provide them with the tools they can use to help themselves and in the languages in which they need them.

In closing, I would like to recount an experience from the human rights arena to emphasise the importance of making the Guiding Principles and Handbook available to displaced populations. Back in the 1970s, through my human rights work I had the occasion to meet a Soviet dissident who had been confined to a psychiatric hospital because of his political views. He had been injected with painful drugs, abused and partially starved. Because of an international campaign, he was released. When I met him in New York, I could not help but ask him: “How did you get through all of this?” In response, he took a crumpled piece of paper from his back pocket, and said, “This is how.” The paper was the text of the International Covenants on Human Rights, the UN-adopted standards on civil, political, economic, social and cultural rights. This man had memorised them and knew them by heart. When I asked him how it was possible that this document had sustained him when his government did not abide by the standards in the Covenants, he replied: “Oh, they know about them, they adopted resolutions on them at the UN, in fact they have ratified them, and one day they will have to observe them.” Holding up the Covenants, he said, “This document has power.” He proved to be right. I believe this story should be instructive for today’s discussions about the Guiding Principles and how they can reinforce the response strategies of IDPs. 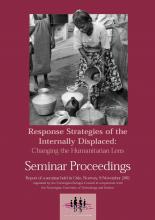