Discriminatory nationality laws disrupt people’s lives in many ways. Women choosing not to have children for fear of the problems those children will face. Young, eligible men unable to find a wife because their statelessness would affect the whole family, including by being passed on to their children. Loving couples under pressure to divorce in the hope that this may open up a pathway to nationality and a more secure future for their children. Children who cannot complete their schooling, access health care, find a decent job when they grow up, inherit property, travel or vote. These are not the intended effects of nationality laws that permit men, but not women, to transmit nationality to their children. Quite the reverse: the historic purpose of systems under which the father’s nationality is decisive for that of his children was to bring unity and stability to families. Yet, in reality, where a child is not able to access its mother’s nationality due to discriminatory laws, the impact can be harsh.[i] In particular, if the father is stateless, unknown, deceased or unable or unwilling to pass on his own nationality, a child may be left without any nationality.

Legislating so that nationality can be transmitted from either father or mother to the child is all it takes. In the simple but effective addition of two words – “or mother” – lies one of the emerging success stories in the fight against statelessness. Awareness of the importance of gender-neutral nationality rules is increasing and, with it, mobilisation behind the cause. Pressure is now mounting on those states which retain discriminatory legislation.

Several countries with large stateless populations are among those where discriminatory laws are still in place. For example, in Kuwait, Syria and Malaysia, children of stateless fathers are inheriting this statelessness and related problems, even if their mothers enjoy nationality; conversely, those whose mothers are stateless and whose fathers hold nationality are rescued from this fate. There are 27 countries in which it is difficult or impossible for a child to acquire his or her mother’s nationality.[ii] Even if they were born in and have always lived in that country, they may be at risk of deportation, lack access to government-funded services such as health care or education, and be prevented from owning property or practising certain professions. Exclusion from their mother’s nationality can also cause significant psychological problems around identity formation and belonging.

Today, the notion that men and women should be equal before the law is generally accepted around the world – and even protected under the Constitutions of many countries. But this is only a relatively recent development and there is still work to be done to ensure that the principle of gender equality is translated into gender-neutral law, policy and practice. Prior to the passing of the Convention on the Elimination of All Forms of Discrimination Against Women (CEDAW) in 1979, dozens of states did not grant equal nationality rights to women and men. A woman holding the nationality of the Netherlands, Pakistan, Thailand or Ivory Coast was not entitled to pass her nationality on to her children on the same terms as men until 1985, 1987, 1992 and 1998 respectively.

Since then gender-biased nationality laws have toppled like dominoes around the globe, with more than twenty reforms since the year 2000. Senegal was the most recent of these, amending its nationality law in June 2013, and a number of other countries are already discussing change.

Elsewhere though, the issue seems to have gained little traction. Despite examples of reform worldwide, gender discrimination has not yet been entirely abolished in nationality laws. The answer to the question of why not inevitably varies from one state to another but there appear to be some common factors that stand in the way of change. One argument repeatedly made by states seeking to justify the retention of discriminatory laws is that allowing women to transfer their nationality to their children would violate the state’s prohibition of dual nationality: the children could in some circumstances acquire two nationalities at birth. Yet, the same could apply when a national man marries a foreign woman, and plenty of countries use other methods to ensure that the children ultimately retain only one nationality.

One way to break down the barriers to legal reform is to understand the process under which it was achieved elsewhere. In order to counteract states’ resistance to change it seems that there needs to be a unified lobbying effort, as was seen in Egypt (see Box). However, in some states advocacy initiatives have not developed to the same extent. One reason for this is that there may be little awareness amongst civil society, the media and the public that discriminatory nationality laws may leave children stateless and unable to exercise many fundamental rights. This gap in knowledge presents a challenge and obstructs positive public engagement in some countries that retain discrimination – especially when political rhetoric plays on fears surrounding security or demographics.

Where there is civil society interest and mobilisation, this does not always include efforts to involve stateless people themselves, leaving them feeling disenfranchised. An example of this is where civil society focuses purely on the subject as a women’s rights issue, whereas the women involved are predominantly concerned about the lives of their children, both male and female. Lack of participation by the affected population can also stem from fear of being identified and subjected to some form of official harassment.

While it is important to identify and acknowledge the obstacles that remain to the abolition of gendered nationality laws, undeniably momentum is building for the eradication of gender discrimination in the transmission of nationality from parent to child. Many countries have already pledged to reform their laws or are currently discussing the mechanics of reform. The number of states where problematic laws are still in place is likely to drop below twenty in the foreseeable future and this in itself is likely to send a strong message to those governments that have yet to commit to change.

Meanwhile, civil society engagement is expanding geographically and growing increasingly sophisticated. National and regional lobbying efforts are feeding an emerging global advocacy campaign to end all discrimination in nationality laws. Organisations concerned with promoting women’s rights, fighting discrimination and addressing statelessness are joining forces to pursue the common goal of raising awareness of the impact of gendered nationality laws and pushing for their universal abolition.[vi] The women and their families who are affected by these laws worldwide are now being heard. Lessons are being drawn from the successes achieved to date and the agenda for change is clear.

[i] See, for instance, UNHCR and CRTDA (2012) A Regional Dialogue on Gender Equality, Nationality and Statelessness: Overview and Key Findings www.refworld.org/docid/4f267ec72.html; Equality Now (2013) Campaign to End Gender Discrimination in Nationality and Citizenship Laws www.equalitynow.org/sites/default/files/NationalityReport_EN.pdf; Women’s Refugee Commission and Tilburg University (2013) Our Motherland, Our Country. Gender Discrimination and Statelessness in the Middle East and North Africa www.unhcr.org/refworld/docid/4f267ec72.html

[iii] UN Division for the Advancement of Women www.un.org/womenwatch/daw/cedaw/reservations.htm

[vi] The Women’s Refugee Commission, UNHCR, Equality Now, Equal Rights Trust and Tilburg University Statelessness Programme are working together to lay the foundations for a global campaign to end gender discrimination in nationality law. The campaign is being launched in mid 2014. 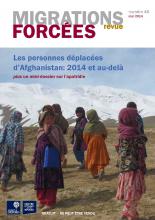