The current migration from Africa to Europe is a symptom of deeply rooted problems that exist on the continent. While there is some truth to the narrative that some progress has been made and that the economies of some of the countries in Africa are registering growth, the overall picture among the grassroots populations across Africa is rather different. The majority continue to live in abject poverty, cannot access good health care, do not have clean water, are not able to send their children to decent schools, and are unable to pay corrupt government officials to receive services to which they are entitled. The sense of desperation that drives them also to move to Europe can mistakenly appear to be scarcely different from that of those who come from relatively stable countries.

Apart from war and persecution, the current migration to Europe from Africa is driven largely by the huge unemployment that exists on the continent, with an ever expanding human resource-base that subsists in dismal conditions, without hope of improvement. Many young people find themselves with little option but to move to urban centres with the hope that they would find work and live a decent life. They spend years walking the streets in search of employment that does not exist. Without work, and a worthwhile future ahead of them, a sense of hopelessness sets in. This leads them to think that the solution is to be found elsewhere. The rural-urban migration to non-existent urban employment in turn leads to emigration elsewhere. In their perception, Europe offers all the answers to their state of hopelessness. That is, until they reach there and then the harsh reality unfolds before them, with nowhere to sleep, no food, no health care, cold and lonely.

Predominantly young, the people who are on the move are largely of the social media generation. They are ‘connected’ – they are ardent watchers of television and listen to international radio broadcasts, all of which come to them nowadays via their mobile phones. When they hear of the economic conditions in Europe as being far better than they are in their own countries, there is a strong temptation for them to leave. This is exacerbated by their compatriots who may have gone earlier and managed to find some work and are remitting some money, however little. To the desperate would-be migrant, this is a measure of success and hence the stream of them who, understandably, are ready to take the trip to also seek employment abroad. The migrants are willing to gamble their lives to get to Europe to seek safety and a better life.

Some of the solutions needed

Boutros Boutros Ghali, the former Secretary General of the United Nations, once said that “…uprooted people are the product of failure – the failure to resolve … underlying causes.”[1]

Governments in Africa need also to take greater interest in the aspirations of their citizens who wish to travel abroad to seek work and support them in an orderly search and placement where the need exists. It is difficult to deny that migration to Europe is robbing Africa not only of its young but also its future. Some of the migrants are a highly skilled labour resource that has been trained at a tremendous cost to the countries of origin.

Meanwhile, the reason why people get on rickety boats and enter Europe clandestinely is that they have been barred from travelling lawfully.

Europe thus needs to revisit its migration policies. The outcome of such a review should include a policy that allows for safe and easier entry and permission to work in Europe, with incentives to leave Europe freely when the visa expires. It is difficult to think of solutions for ‘economic migrants’ who have little chance of being granted asylum without thinking of return to their countries of origin as one of the solutions. This is a position that would be supported by many as long as the safeguards for ensuring the safety of refugees and asylum seekers are observed and no person is returned to a place where his or her life is threatened.

It has been suggested that the high visibility of the arrival of large numbers of migrants, refugees and asylum seekers in Europe may cause fear and consequently damage the institution of asylum in Europe. There should, therefore, be a concerted effort to identify refugees and asylum seekers and have their cases handled differently from the rest. As with all situations of population displacements, at the heart of the response is protection. While for some migrants the solution may well be returning, or being returned, home, including refugees among them would be disastrous. It is important that immigration-control measures are matched with adequate protection safeguards so that refugees and asylum seekers can be distinguished from persons who are not in need of international protection. It should not be forgotten or ignored, however, that irrespective of the cause of their movement, all the people involved need their human rights to be respected.

For many, migrating to Europe was not their first choice. Migration from Africa is only a symptom of deeply rooted problems, among them poverty in the midst of reports of progress and growth. Others are refugees seeking protection from wars, persecution and human rights violations. From the media, they have grown to understand that Europe stands for human rights and that once they get there they would be protected from their governments but also have a better quality of asylum. In its response Europe should assume its responsibility to help those seeking protection from war, persecution and human rights violations.

Governments in Africa need to look at their own systems and policies to identify why it is that their nationals are leaving in such high numbers and taking unspeakable risks to get away. To stem the temptation to migrate, governments in Africa also need to take greater interest in the aspirations of their citizens and better manage migration while tackling the criminal element in migratory movements. In this endeavour, Europe too should do more to facilitate legal migration.

In the end, the rescue efforts and attempts to disrupt smuggling networks with a short-term military campaign will probably not have a long-lasting effect unless the phenomenon of migration is approached comprehensively and measures adopted to address not only the overly restrictive migration policies in Europe but also the causes and the push factors in the countries of origin.

Former Director and Country Representative of UNHCR in Ethiopia 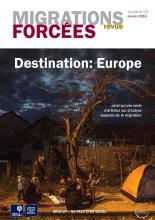