We know that real people’s faces are important to bring to life the words – facts, thoughts, ideas and feelings – that are in FMR. We have always sought out images that show the personal reality of forced migration, trafficking and statelessness.

We know that in general the photographers and agencies who generously provide photos for FMR’s use will have sought permission from those being photographed. However, we have begun to question our assumption that it is therefore always appropriate for us to use these photos in FMR.

FMR is distributed around the world in print and is freely accessible online on our own website; however, it is also made available on other websites and in public libraries, and photos used in FMR are widely circulated on social media. In reality, we ourselves have no way to be sure that the people in the photographs could have given truly informed consent for their image to be used by us. Would they have understood that their image might be seen by people all around the world, and that it would live on in the virtual world for potentially many, many years?

We think that there are cases where individuals would not wish their image to be used in such a way that they might be identifiable for ever in a situation that is, in all likelihood, a temporary one that catches them at a low point in their lives. We cannot be sure either that showing their image will not – at some time and in some way that could not be foreseen – damage them or undermine their dignity. We therefore need to act with caution.

We have decided that we should whenever possible protect the identity of people shown in FMR – unless it is obvious that this precaution is unnecessary – by avoiding close-up images of faces and/or, where necessary, pixellating faces.

We realise that there is no perfect, correct way to do this. The people in the photos may feel that this robs them of their full identity; they may feel that we are playing into the hands of those who would typecast refugees as second-class citizens or as ‘undesirables’. It may also lessen the impact of the words. But we have come to the conclusion that this is a route we should try to follow.

Let us know what you think. You can email us at fmr@qeh.ox.ac.uk. 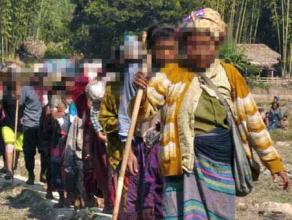 We first started following this policy with FMR issue 37 in March 2011 and explained it to our readers on the back page of that issue.