With per capita expenditure on health in Burma estimated at less than $0.50 per year,[1] it is not surprising that health status in Burma is lower than elsewhere in the region. This is particularly true of reproductive health.

There is an urgent need for improved reproductive health services in Burma. At 360 per 100,000 live births[2] the estimated maternal mortality ratio is lower than a number of other countries in the region but there is widespread belief that this number is not a true representation of the maternal deaths in the country. Contraceptive use is also low, with large regional variations; women in those areas most affected by conflict are less likely to use a modern contraceptive than those living in the central plains region. In Arakan State, where many people are displaced from their homes or are returnees from refugee camps in Bangladesh, the contraceptive prevalence rate among married women is particularly low.

The government of Burma has stated that it is committed to achieving the Millennium Development Goals (MDGs) by the target date of 2015 and that reducing maternal mortality by 75% (MDG 5) is a priority for action in 2008. However, reproductive health (RH) services in Burma are predominately through private provision and therefore only accessible to those able to pay. There are limited services available in rural areas and the areas along the borders are particularly poorly served.

Despite the government’s stated policy of focusing on MDG 5, one of the major barriers to contraceptive use is the government’s stance in favour of raising the birth rate. In a recent speech, the Chairman of the State Peace and Development Council clearly indicated the desire for a much larger population, referring to a “projected population of 100 million” (almost double the current estimated population). It is not surprising therefore that contraceptives are not widely available in government health centres and that the private sector is reported to be the main source of contraception. This is particularly relevant to women living in conflict-affected States and the border areas where private practitioners and private clinics are less likely to be available and where few international agencies are able to work. There are also tight restrictions on the use of permanent methods of family planning.

Without access to family planning services women tend to have babies too young, too close together, too many and too late – the four main factors which increase the risk of maternal and child death. Lack of family planning also leads to unplanned pregnancies, which may result in unsafe abortion. Despite efforts by a number of international and national agencies, HIV prevalence is among the highest in the region.

SRH services on the border

Reproductive health needs are being addressed by a number of agencies working on the Thai-Burma border, though these are often limited to reaching only those refugees living in camps. There have been significant improvements in the camps since the late 1990s. For example, emergency obstetric care is now available in most sites 24 hours a day, seven days a week. However, use of contraceptive methods is still low. High levels of unsafe abortion are reported, with correspondingly high levels of morbidity and mortality.

There is a particular need for sexual and reproductive health (SRH) education. Many refugees have only limited knowledge of basic methods of contraception and how to protect themselves from Sexually Transmitted Infections and HIV. Young women are particularly vulnerable, as they are at risk of being forced to work in one of the many brothels located in western Thailand.

Reproductive health needs of both internally displaced populations in Burma and refugees in Thailand and Bangladesh are far from being met. There is a need to:

The British government is one of the largest donors to Burma. Its Department for International Development (DFID) works with UN agencies, international and local NGOs, rather than funding the government of Burma directly, in order to ensure that funds are not diverted to support the repressive and illegitimate regime.

In 2007, the International Development Committee[3] of the British parliament held an inquiry into DFID’s assistance to Burmese IDPs and refugees along the Thai-Burma border which published its recommendations in October 2007.[4] The report highlights key areas where support is needed, including in sexual and reproductive health. Both the Global Fund to Fight AIDS, TB and Malaria and the Fund for HIV and AIDS in Myanmar (FHAM)[5] reflected the need to work through national and international NGOs but recognised the challenge of achieving the national-level coverage required to meet the needs of the most vulnerable when operating through NGOs.

Donor recognition of the need to support community-based organisations and NGOs inside Burma marks something of a shift in policy. As with IDPs elsewhere in the world, it is those not living in camps and not recognised as displaced who are most excluded from access to services.

The International Development Committee recommends a quadrupling of aid for Burma. The real challenge for donors, however, is to find effective development partners able to provide good SRH services within the country in addition to those NGOs working across the Thai-Burmese border.

John Bercow (BERCOWJ@parliament.uk) is a Member of the UK Parliament and is Chairman of the All-Party Parliamentary Group for Democracy in Burma. He is also a member of the UK’s International Development Committee. 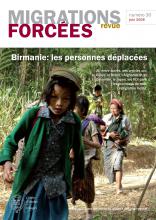