Article 34 of the 1951 Convention calls on States to facilitate the “assimilation and naturalisation” of refugees. UNHCR recently published recommendations on how members of the European Union could better do so.[1]

As part of its mandate to assist countries in fulfilling their obligations towards asylum-seekers and refugees, UNHCR recently conducted assessments in several European Union countries to identify obstacles to the integration of refugees and other people in need of international protection. The refugee men, women, boys and girls who participated have revealed what refugees perceive as key obstacles to integration:

An extended asylum procedure can be one of the main obstacles to successful social, economic and cultural integration. The status determination procedure is often characterised by insecurity and inactivity which may be damaging to refugees’ mental health, provoking depression, dependency syndrome, apathy and lack of self-confidence, and hindering employment and social skills after recognition. Lengthy procedures have a particular impact on children.

Reception policies should be designed to minimise isolation and separation from host communities and provide for effective language and vocational skills development and assistance to pursue employment. Language training should generally be provided upon commencement of the asylum procedure and should convey key information about the host society. UNHCR suggests that six months be set as a maximum period for any ban on access to the labour market for asylum-seekers. Providing access to the labour market and vocational training can reduce reception costs, discourage informal employment and facilitate reintegration into the country of origin by allowing asylum-seekers who return home to do so with a degree of financial independence or acquired work skills.

Accommodation which allows interaction with the host community is also important for future integration. Detention, even if for a short period of time, can have lasting effects on individuals and on their ability to adjust to and integrate, particularly in the case of children and traumatised persons.

The Directive concerning the Status of Third Country Nationals who are Long-Term Residents grants a conditional right to permanent residency after five years’ residence on the territory of an EU Member State. The Directive does not apply to refugees. Refugees and persons granted subsidiary protection who reside lawfully in and have contributed to communities in Member States for many years do not at present enjoy the same rights under EU law as other legally resident third country nationals. In UNHCR’s view, permanent residence should be granted to both refugees and those granted subsidiary protection at the latest at the end of a three-year period of residence.

Inadequate reception can exacerbate or perpetuate the effects of any pre-flight trauma. Continued separation from family members, absence of work, social exclusion and marginalisation, anxiety about the future and exposure to ignorance, hostility and humiliation all aggravate the psychological state of the person concerned. It is important to remove obstacles that maintain effects of trauma. Unless the consequences of trauma are addressed, refugees may not be in a position fully to participate in integration programmes, and their ability to become active members of society may be seriously hampered. Specialised care, counselling and other types of health facilities should be provided – and cross-cultural mediators and interpreters may be needed.

The possibility of being reunited with one’s family is of vital importance to the integration process. Family members can reinforce the social support system of refugees and, in so doing, promote integration. In the EU, family reunification rights are generally limited to core family members, despite the fact that in other cultures extended family links can be very strong. UNHCR encourages Member States to adopt a pragmatic and flexible approach to requests for family reunification with other dependent family members who were living in the same household as the refugee prior to flight.

Naturalisation concludes the legal dimension of the integration process as it leads to cessation of refugee status. Several EU Member States have reduced waiting periods and naturalisation fees and/or removed requirements for the renunciation of the citizenship of the country of origin. UNHCR encourages other Member States to follow suit and consider the possibility of facilitating the acquisition of citizenship by refugees.

[1] Following an informal meeting in May 2007 of EU ministers responsible for integration, UNHCR published a Note on the Integration of Refugees in the European Union: www.unhcr.org/protect/PROTECTION/463b462c4.pdf 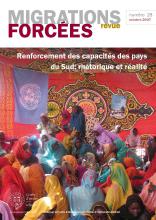