Parent-Teacher Associations and other community groups can play a significant role in helping to establish and run refugee schools; their involvement can also help refugee adults adjust to their changed circumstances.

In 1998 Sierra Leonean and Liberian refugees were transferred from volatile border areas to large, pre-planned camps further into Guinea. The refugees travelled in large trucks, each being allowed to take a few personal belongings with them – blanket, bucket, pots and clothing. As I watched them, however, I saw other items in there with them: huge chalkboards and laminated lesson plans. They would erect temporary schools immediately upon arrival in the new camps, sometimes even before they had a chance to build their own shelter. A symbol of hope and determination, the school needed to be present for the community to take hold anew.

Education is seen as offering hope for a better future – and a chance to defeat a sense of despair. Furthermore, many refugees believe that familiar ties and routines are essential in post-conflict situations. This struggle to provide education for their children against the odds can give refugees a cause to fight for and a sense of purpose.

In setting up a school, broad community involvement is to be encouraged: teachers, community leaders and elders, women’s association members, student leaders, health workers, spiritual leaders and active parents. As participants contribute their ideas, they become part of an ad hoc gathering which eventually becomes a recognised entity with decision-making authority and, frequently, a sense of community zeal: a Parent-Teacher Association (PTA).

In organising when and how the school will be built, a PTA takes on a particularly crucial role in the context of widespread social erosion – that of contributing towards the formation of a community. There is seldom little else in terms of semi-permanent structures in most camps; the school will eventually become a community centre – used for adult literacy classes, census control and meetings and as an emergency screening area and shelter for new arrivals.

Parents can become involved in a range of tasks in order to make sure that their children receive a better education, from registering students and constructing new buildings and sanitation facilities, to gaining local government support for their activities and synchronising the refugees’ curriculum and daily activities with that of local citizens. The involvement of parents helps motivate their children to study and stay in school. Equally important, however, is that in most cases this involvement also reduces the adults’ feelings of remoteness and powerlessness that can result from living in a camp environment.

Serving as a catalyst for broader leadership, PTAs can bring together a range of individuals who would not otherwise have been interacting in such a forum, all contributing ideas about issues such as girls’ education, teaching methods and even what subjects should be selected as the basis for future nation-building. When current events directly concerned the displaced population, some refugee parents in Guinea requested that the children – the peacemakers of the future – be taught about these issues in school. This is already done in some schools through news clubs that focus on a newspaper article or television programme to explore each week. Other parents demanded that more be done to explain the terrible events that took place during the war. One Liberian father asked that students learn why their peers got involved in burning houses and killing their neighbours; not only did parents feel that school children needed to have a more in-depth understanding of why conflict took place in the way it did but they also wanted their children to learn something relevant and then to pass it on to them as secondary learners.

In the case of Eritrea, it was found that in a developmental relief setting the PTA may gradually become involved in wider community mobilisation, identification of needs and project implementation, including securing of grants. This in turn may involve programme support, costing, inventory control, record-keeping and related skills. Projects may be important in terms of the impact they make but more significant still is the learning process that those involved go through. Through the use of cluster meetings between schools, experiences may be shared for mutual benefit and overall levels of confidence enhanced.

Ezra S Simon is currently Program Coordinator for Children and Armed Conflict at the Social Science Research Council (www.ssrc.org/programs/children). Previously, he worked on children’s programmes in Eritrea and Ethiopia, and with refugees from Sierra Leone and Liberia in Guinea. Email: simon@ssrc.org 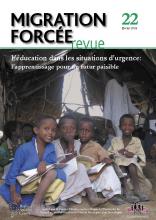